This page contains one image, the names of the FALLEN 1914 – 1918, and a report on the unveiling and dedication ceremony. uwms@outlook.com 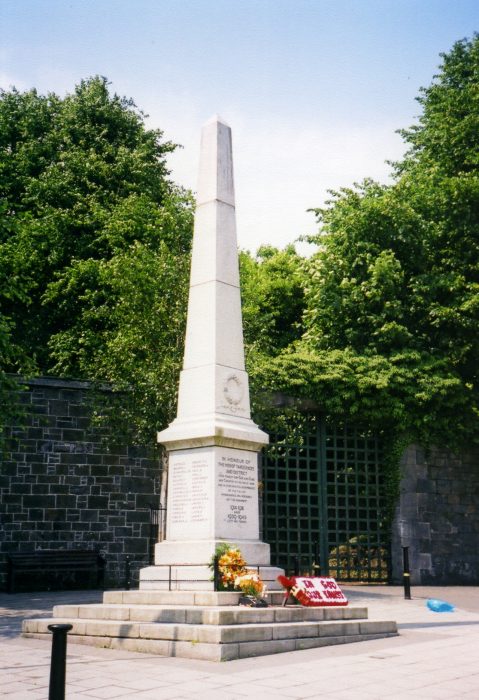 “NO PINCH” OF MEN FOR THE GREAT WAR.

Tandragee people have erected a fine memorial in memory of the men of the town who fell in the Great War. Of grey granite, almost 25 feet high, the memorial stands in the square oppo­site the Castle gate, overlooking the broad main street of the town, sloping down from the gate. The broad base supports three broad steps symbolising endurance, faith, and love. On these rest the base and plinth, carrying a pedestal on which are inscription and names of the fallen ; above the pedestal is the capital from which rises a tall obelisk. On the front of the obelisk, above the inscription, is chiselled a memorial wreath. The whole structure is carried out in grey Newry granite, and, though massive, its proportions are so admirable that all suggestion of heaviness is eradicated.

The inscription, in raised lettering reads. ;-

IN HONOUR OF THE MEN OF TANDRAGEE AND DISTRICT

who fought for God and King and Country in the Great War and in ever grateful remembrance of the fallen whose names are inscribed on this monument.

On the other sides are engraved in like manner the names of the 72 men who fell during the war.

The dedication and unveiling ceremony took place on Monday morning, a very large crowd gathering to witness the event. Drawn up in front of the memorial was a Guard of Honour of men who had served during the war and who had returned, Captain W. G. Menaul being in charge. With them was the Tandragee Troop Boy Scouts, under Scout Master William Gough. Major D. Graham Shillington; D.L., M.P., who was to unveil the memorial, inspected both these parties.

The inspection over, prayer was offered by Rev. James Edgar, B.A., Tandragee Presbyterian Church, after which Dr. James Taylor, J.P. (Chairman of the Memorial Committee) spoke. He said those of them who, by reason of age and other causes were unable to take their places in the Fighting Forces of the Empire, felt that they too, had a duty to perform when the war broke out. That duty took the form of stirring up the warlike spirit and patriotism of the young men of the town and district. In doing that they incurred a grave responsibility, the result of which was that monument they saw that day. It was placed there to commemorate with gratitude the devotion and heroism of the men of Tandragee and district who gave their lives for their country.

Following the singing of the hymn, “O God, our help in ages past,” Major Shillington delivered a short address in which he referred to the splendid response which the men of that district made when the call to service for their King and country came to them, and to the magnificent record, for heroism and devotion to duty which they had established in the great struggles in which the Ulster Division had taken part. He then unveiled the memorial, which was subsequently handed over to the care of the Urban Council.

The dedicatory prayer was said by Rev. R. S. Morrison, B.D., rector of the parish, after which buglers of the Royal Ulster Rifles from the Depot at Armagh sounded the “Last Post.” There was a brief period of silence, and then the stir­ring notes of “The Reveille,” with its message of hope and call to further service, rang out on the still atmosphere brooding over a town whose entire population had turned out to do homage to its gallant dead. These few tense moments were full of poignant yet proud memories for many people assembled around the obelisk, for the little town paid a heavy toll in the gigantic struggle to preserve the honour of the nation and the unity and might of the Empire. A vote of thanks was accorded Major Shillington, on the motion of Major Harden, J.P. (Chairman of the Urban Council), seconded by the High Sheriff (Chairman of the Urban Council). The Benediction was pronounced by Rev. W. S. Carey, B.A. (Methodist Church), and the singing of the National Anthem brought a very impressive cere­mony to a close. Wreaths were after­wards laid at the base of the monument, amongst which was a handsome tribute from the Urban Council, which the High Sheriff placed in position.