This page contains four images and a report on the opening ceremony. ​ 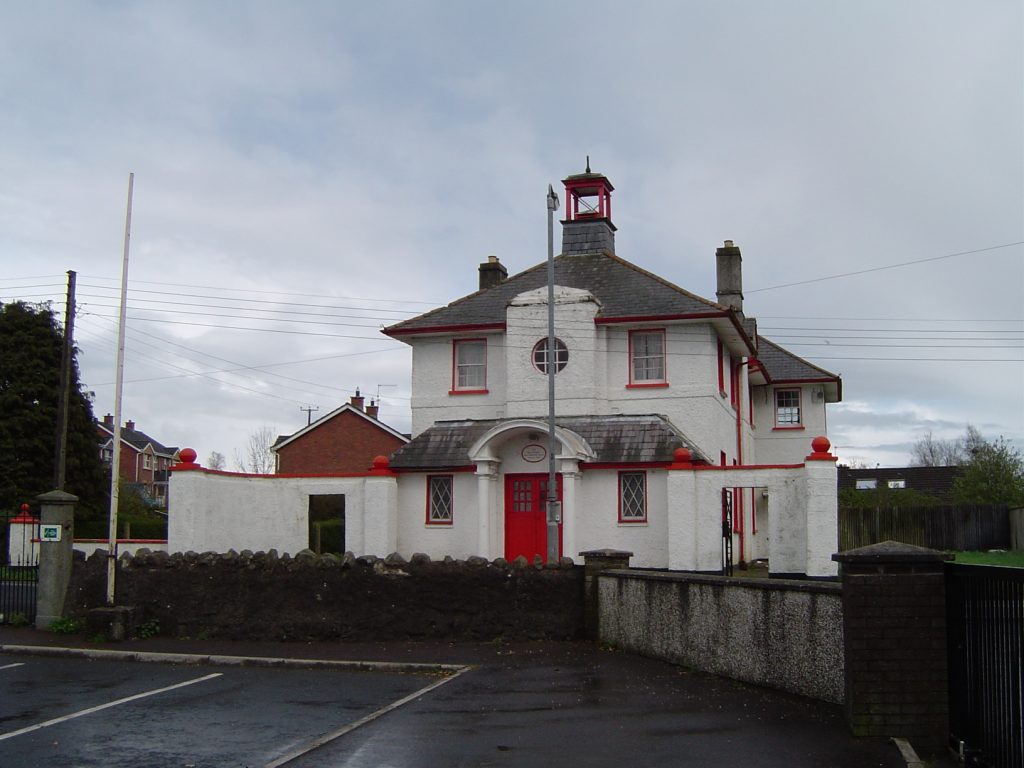 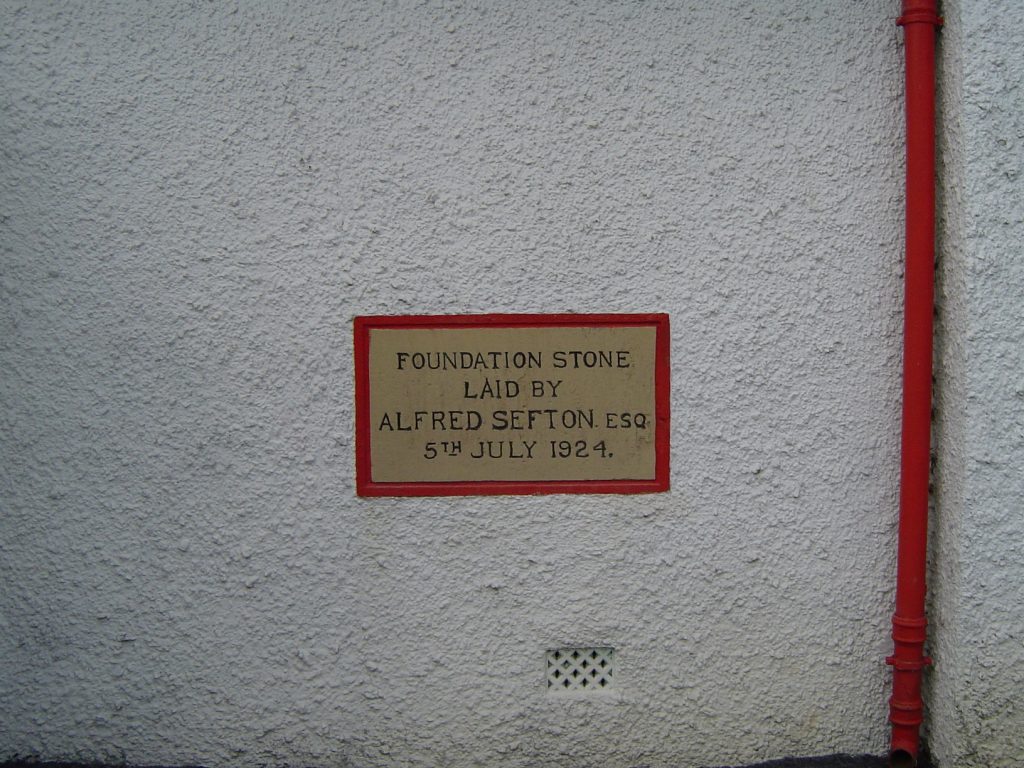 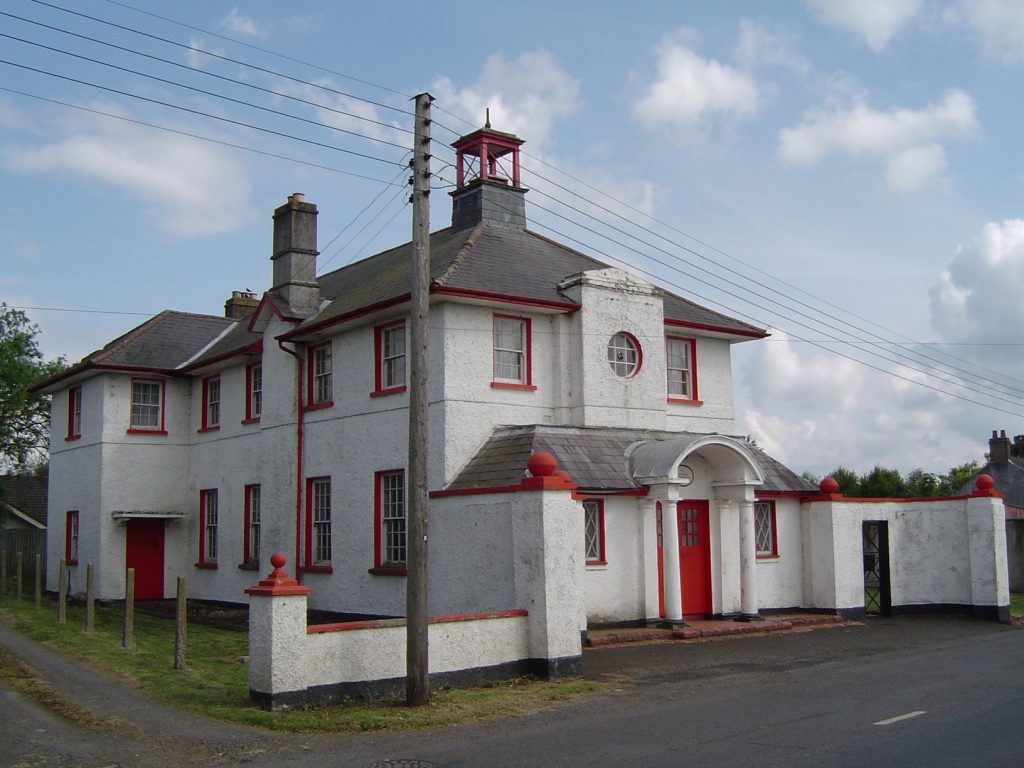 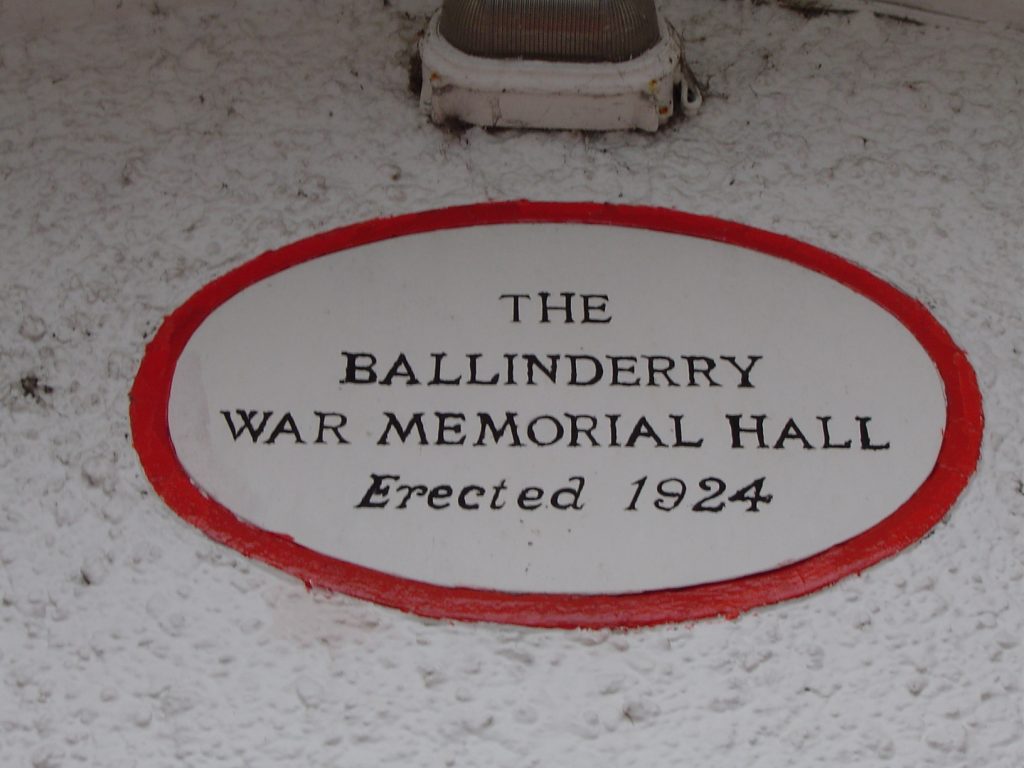 On Friday afternoon, 7 November, 1924, the fine Memorial Hall erected at Ballinderry as a permanent remembrance of the brave young men of the district who served, and many of whom gave up their lives, in the great war, was formally opened in presence of a large assemblage. The two-storey building, which was designed by Mr. Robert Gibson, C.E., Belfast, is a worthy memorial, and will serve many useful purposes, being commodious adequately equipped. The building committee, of which Mrs. Henry Walkington, Oatlands was the honorary and energetic secretary, are to be congratulated on the success of the project. The trustees of the Hall are Messrs. Henry Walkington, Hubert Beckett, and William Quinn. The proceeding took place opposite and adjacent to the new building, from the tower of which floated the Union Jack.

Mr. W. R. E. Boyd, in proposing that the chair be taken by Mr. Milne Barbour, said that everything that gentleman had his hand to he put his heart and soul into, and carried to a successful issue. (Applause.) Mr. David Motherwell (Belfast) seconded, and the motion was passed by acclamation.

The Chairman, who had an enthusiastic reception, said he assured them it was a very great pleasure indeed for him to be amongst them that day, and especially on account of the occasion for which they were assembled. Although Ballinderry was some distance away from where he lived, the name of the locality was very familiar   to him. He reminded them that in days gone by his father was one of the hunting sportsmen who visited that district.  Since those times many things had happened, but   he supposed the outstanding thing in their memories was the terrible tragedy of the Great War.   To those who had lost near and dear, the memory of those awful days was as fresh now as it was five or six, or even ten, years ago. It was only right that they should honour in a fitting way the memory of those brave men who, animated by the principles they all held so dear, gave up their daily avocations, left their homes and friends, and responded to the call of King and Country, giving their services and even their lives, in defence of the cause of freedom and the Empire.  (Applause.) It was their duty to see that the memory of those brave men and their gallant deeds should never disappear from their midst.  It had been a very happy thought on the part of those who had planned the erection of that hall, which he was about to call upon Sir Robert Baird to open, that they should conceive that the memorial should take such a useful and practical form. He hoped, and believed, it would serve its purpose, and recall to all who had passed with in or by its doors the debt they owed to those in whose memory it had been erected.  He had pleasure in calling upon. Mrs. Walkington, the hon. secretary, to present Sir Robert Baird with the necessary mean of opening the hall. (Applause.)

Sir Robert Baird, who had a cordial greeting said that when he was asked by Mrs. Walkington and the Building Committee to perform the opening ceremony, he felt it a great pleasure as well as an honour to comply. He proceeded – “I have been well acquainted with this beautiful district from my youth up, and I have hereabouts many good friends. I know the high character that Ballinderry, along with its neighbouring districts – Glenavy, Killultagh, Aghalee, Moira, Soldierstown – has always enjoyed, I for intense loyalty and sound patriotism.”  That devotion to Crown and country was splendidly evidenced in the ready response the young men of Ballinderry made when the call to arms came in the Great War.  (Applause.)  The response was not alone on the part of the men who went to the front and “did their bit” bravely and well, but also on the part of their mothers and fathers, wives and sweethearts, who so far from holding back those they loved so dearly, encouraged then to go out and do their duty, sad though the partings were, and terrible the dangers ahead. In the splendid Ulster Division and other ranks, on sea and land, in many climes the young men of Ballinderry maintained the best tra­ditions of their loyal countryside, and though many of them, alas, sleep the long sleep in Flanders fields where poppy’s grow and in other scenes of terrible combat, they secured for us the glorious peace- which we shall celebrate for the sixth year next Tuesday, which will be Armistice Day.”  (Ap­plause.)

Continuing, Sir Robert said-“I think you are to be congratulated upon the form which    you decided your memorial should take to the glorious dead-and not only them, but   the noble band who were spared to return to their homes, not a few bearing the honourable scars of war. This large, handsome, and thoroughly equip­ped hall will be   of practical use to the living for many generations to came, and be a fitting monument   so long as one stone shall stand upon another to those in whose honour it has been   erected. I am deligh­ted to know that the response to the cost of erection has already   been so generous and widespread, even on the part of the very poorest, and I feel confident that as a result of the final effort being made by the bazaar-to be opened   to-day by Mrs. Holt Waring, worthy bearer of a far-famed name, and tomorrow by Mrs. H. Walkington, who has been so active and untiring in the discharge of her duties as hon. secretary of the Building Committee-you will be enabled to enter upon occupation of the Memorial Hall free of any incubus of debt, and ready to take up unhampered by liability the good work that lies, ahead. (Applause.) I learned with great interest of the success which attended the function of the foundation stone laying by our esteemed friend, Mr. Alfred Sefton-whose name is a household word far beyond the bounds of Ballinderry. That was only so recently as the Saturday before last Twelfth of July, so that your architect and builders have lost no time in the intervening four months in completing the structure, which is a credit to everyone concerned, and an ornament to this picturesque parish. The hall will supply a long-felt   want, and be a centre of many useful loyal and local activities. That the greatest   prosperity may attend all the good works to be carried on here in the future is my   sincere wish, as I know it is of all the many friends who have come to-day to share in your celebration.  We have passed through many dark days during the war and since; but there is every sign, thank God, that the sunshine of brighter times ahead is already emerging from the clouds.  We have all been rejoiced at the splendid victory for constitutionalism and patriotic, government achieved in the late General Election.     Already at home and abroad we see evid­ences of a feeling greater security, and, under the guidance of Mr. Baldwin as our British Prime Minister, and with Sir James Craig at the helm of our own good ship of State in Ulster, we have every reason to be of good cheer, cheer, and full of confidence for the future.  (Loud applause.)  He (the spea­ker) was delighted to see beside him that afternoon one of staunchest Orangemen and Loyalists in County Antrim, his friend Br. Dr. Mussen, for many years the respected secretary of County Antrim Grand Lodge. (Applause.) Mentioning that that was the first time he had performed an opening ceremony, although present at many Sir Robert used the presentation key and concluded I have the greatest pleasure in declaring this Ballinderry Memorial hall open and trust it may long stand as a monument to the gallant dead in whose honour it has been erected, and of the self-sacrificing services of their comrades who survived. (Loud applause.)

Mr. Alexander Deans, in proposing a hearty vote of thanks to Sir Robert Baird, said it had been a real pleasure to him to come to Ballinderry and see the opening of that magnificent memorial hall. Sir Robert was always ready to do a good turn and support a good cause whenever it was possible to do so. There was no man in the North of Ireland who was more gene­rous in giving assistance where it was needed. He congratulated his Ballinderry friends upon their new hall, and wished the greatest success to the bazaar which was to follow. (Applause.)

Mr. Abraham Johnson seconded, and re­marked that he came of a Ballinderry family as his father was born, in the neighbourhood. The motion was passed by acclamation, and conveyed by Mr. Milne Barbour.

Sir Robert Baird returned thanks, and said he was sure the ladies were anxious that the Bazaar should be proceeded with. He and his good friend the chairman seemed to have a weakness for bazaars, as they had met at the opening of a good many over Co. Antrim during the past few months. He appreciated highly their beautiful gift, which would have an honoured place in his home. He greatly regretted that her health had not permitted Lady Baird to be with him on that interesting occasion. The people of Ballinderry and district had a reputation for being sturdy, industrious, and determined, and he was sure that when the bazaar closed they would have their hall free from   debt. (Applause.)