This page contains four images, the names of THE FALLEN  and a report on the unveiling and dedication ceremony 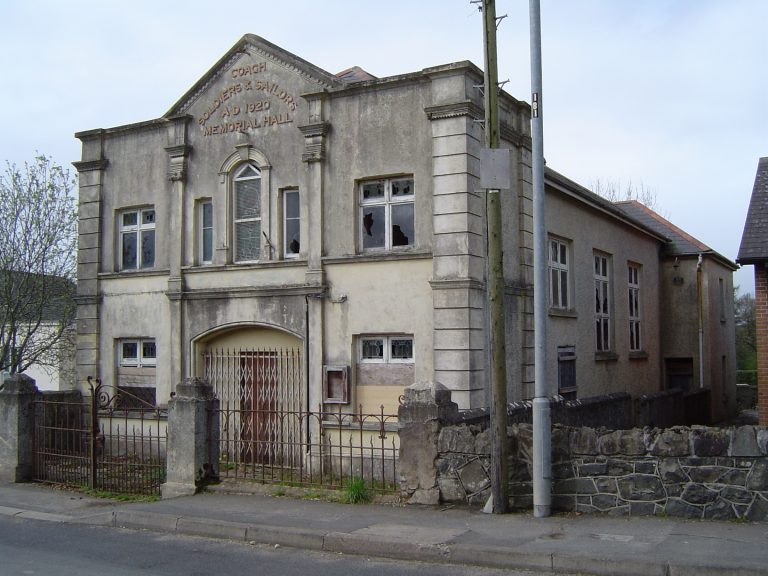 MESSAGE FROM THE PREMIER.

A memorial hall, which has been erected at Coagh, Go. Tyrone, as a permanent and useful memorial to those from the district who served in the Great War, thirty-three of whom fell, was formally opened on Saturday, by Lady Craig, wife of the Northern Premier, in the presence of a dis­tinguished gathering.

Mr. R. J. M’Keown, M.P., who presided, said that that was a red letter day in the history of

Coagh, because it was the first occasion on which they had been honoured by the presence    of a Prime Minister’s wife. While one at all times de­sired to honour the memories of those who have fallen in the Great War, he considered it a special privilege to take part in those proceedings which had for their object the honour of the gallant men of his own neighbourhood who so nobly served in the war. In no part of the kingdom was there a more ready response to the call of the country in its need, and that hall would serve to remind those who came after of the sacrifice made by the gallant men whose names were recorded on the   memorial brasses.

Dr. Burges, chairman of the hall trustees, pre­sented a silver key to Lady Craig, and asked her to declare the hall open.

Lady Craig, in declaring the hall open, regretted the absence of her husband, and read the following message from him: –

“On the occasion of the opening of your new hall I send, by my wife, to you hearty congratu­lations and encouragement. Something useful has been erected in your, midst to commemorate the great-deeds of gallant men. My message to you is to keep the old flag flying, as I propose to do.”

Lady Craig, continuing, said that she need hardly add that the interests of. Ulster were perfectly safe his keeping. He was an Ulsterman born and bred; he had fought for her all his life and will fight for her to the end. She (the speaker) was sure that in loyal place like Coagh she need not ask them to trust him-she was sure they would, and it would give him great encouragement to know how heartily they received his message. She then formally declared the hall open.

Mrs. Lennox-Conyngham afterwards unveiled one of the memorial brasses which contained the names of the fallen, and Mrs. R. J. M’Keown unveiled the other, on which was inscribed the names of those who had served.

On Sunday afternoon a memorial service was conducted in the new hall by Lieut.-Colonel Rev. D. H. Hanson, MA., C.F., who delivered a touching and appropriate address. 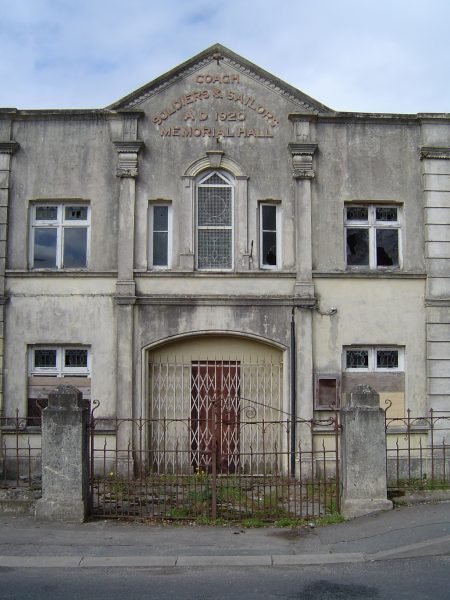 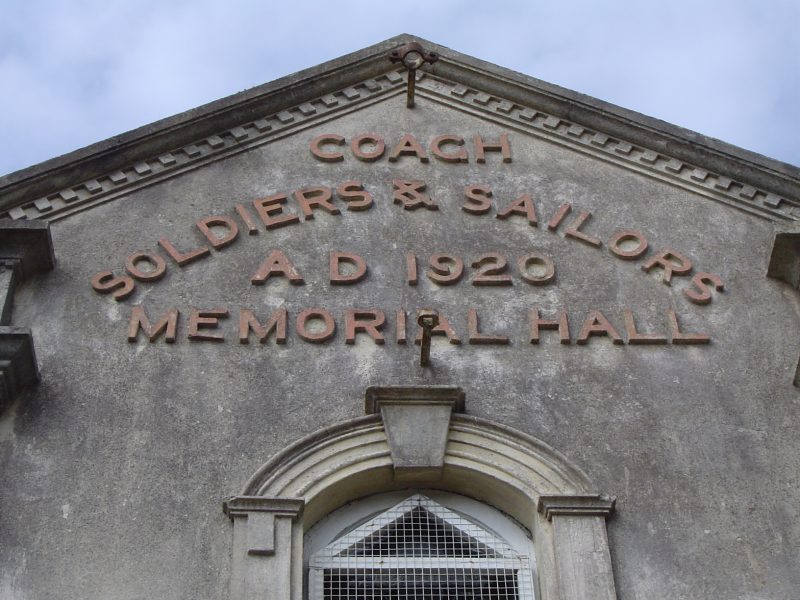 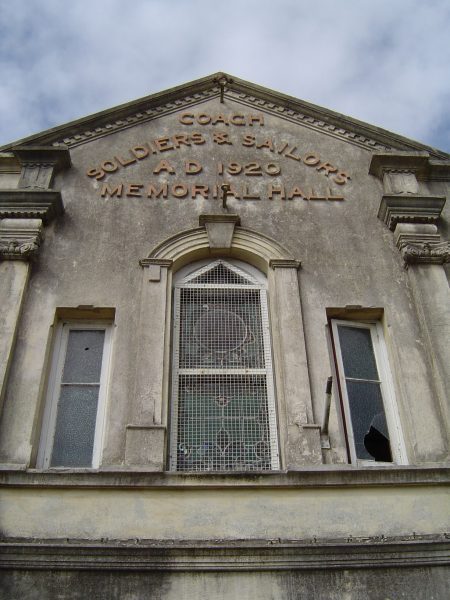 The photograph clearly shows a hall in a semi-derelict condition unlike in 1920, when judging from the following description of the unveiling and dedication, the hall was a very impressive building indeed.

‘Facing the county road, the building is finished in ornamental concrete, on which the inscription stands out in relief “Coagh Soldiers’ and Sailors’ Memorial Hall, A.D. 1920.” In the centre is a memorial window of stained glass, on which is predicted a soldier’s grave, surmounted by a cross, on either side of which stands a soldier and sailor holding a laurel wreath, and overall, the picture of a dove, with outstretched wings, and beneath the words- “Lest we forget.”

The arched entrance to the vestibule is guarded by a collapsible gate. To the left a staircase, with solid mahogany rail, leads to the gallery, while to the right is a convenient cloakroom. The swinging doors leading into the main hall are of polished oak, with inset stained-glass panels, bearing the inscription, “The glorious dead.” On each side of the door is erected a massive bronze tablet of beautiful design and workmanship, one of which bears the 33 names of the fallen, underneath the inscription- “In proud and grateful memory of those who left this district to fight in the cause of liberty and justice, and who laid down their lives in the great war, 1914 – 1919”-and the other the names of those who served.

The main hall, including the gallery, has seating accommodation for 400 persons. A small staircase on either side of the back gives access to the stage from the ante-rooms behind. The front portion of the hall is seated with chairs, and in the back portion and gallery the seats are of pitch pine. Entering the back portion of the building by a side door a staircase leads to a commodious room upstairs, having ample accommodation for smaller meetings, for which the space afforded by the main hall would not be required. Beneath this room are two small rooms, with doors leading into the stage, and fitted up with all necessary requirements for using them in conjunction with the larger rooms.’

Dr. Burges, chairman of the hall trustees, pre­sented a silver key to Lady Craig, wife of the Prime Minister of Northern Ireland, and asked her to declare the hall open.

Mrs. Lennox-Conyngham afterwards unveiled one of the memorial brasses which contained the names of the fallen, and Mrs. R. J. M’Keown unveiled the other, on which was inscribed the names of those who had served.

Although the inscription above the door dates the hall as 1920, it was not officially opened until 1921.

Background to the erection of Coagh Memorial Hall.

Coagh is going to have a Memorial Hall

Coagh is going to have a Memorial Hall in memory of the men who fought in the great war. Rev. F. B. Kinch made a tell­ing point when he stated that in his parish records there was not a single mention of any of the men who had fought and fell in the Napoleonic wars, and it would be a disgrace if ever the names of the men who fell in the present war were similarly forgotten. The point applies even more to Cookstown, because Colonel Stewart, of Killymoon, raised a large number of men on his estate and sur­rounding district, who fought at Water­loo on the famous 95th. Colonel Stewart’s gallantry is properly remembered, but even the names of the rank and file are for­gotten. In these democratic days we want to ensure that the men who went over the top shall be remembered as well as the men at headquarters, and their names inscribed in a permanent form, so that all who pass can read.

Coagh Soldiers and Sailors Memorial Hall was demolished about 2107/8 and replaced by a small memorial. If you can supply more precise details of the erection date of the new War Memorial and/or an image, it would be much appreciated.​