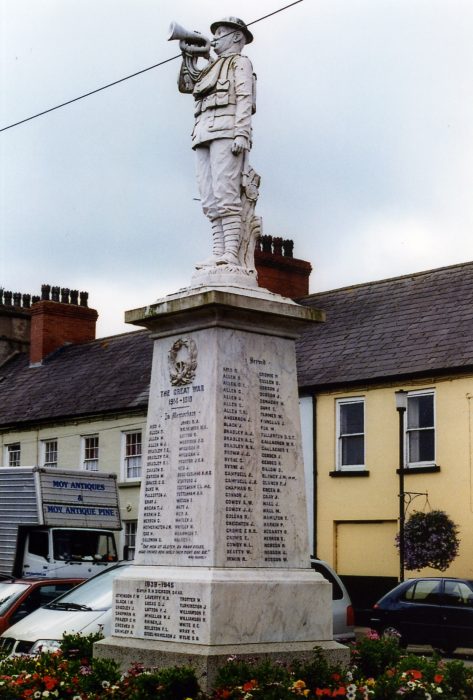 Lest we forget” was a sentiment that was expressed in no unmistak­able manner in Moy on Tuesday when a war memorial erected in honour of the gallant dead, and in appreciation of those who served in the Great War was unveiled. When the call to arms sounded it was nobly res­ponded to by 174 men and 10 women from that district, of those numbers 36 paid the supreme sacrifice. Some months ago it was proposed that a suitable memorial should be erected, and the following were appointed an Executive Committee to carry out the arrangements: –

Mr. L. C. L. Tottenham (chairman); Mr. Wm. Murray, (Secretary); Mr. Joseph Murray (Treasurer); Mrs. Henry, Mrs. Thompson, Miss Proctor, Rev. R. J. M. Park, Major D. R. Williamson, Messrs. W. E. Stevenson, E. Cowdy, D.L., W. A. Bamford, R. A. Johnston and H. Lennon, J.P. They energetically got to work, and the result of their efforts is a beautiful war memorial erected in the Square, Moy. It is an artistic monument of Sicilian marble, the figure being a representation of a soldier in full battle order, surmounted on a granite base. On the front, underneath the names of those killed is the following inscription:-

“The men of Ulster on many fields, have proved how nobly they fight and die”- King George V. On the other panels are the names of those who served.

With befitting ceremonial, the memorial was unveiled on Tuesday, and the scene was a touching and impres­sive one. There was a very large crowd present during the proceedings. On one side of a square was a Guard of Honour composed of forty non­-commissioned officers and men of the Royal Ulster Rifles from Armagh, under the command of Lt. H. J: Coch­rane, M.C., Capt. Ross Martin, O.B.E., and Lt., Deane, M.C., being also in attendance. On the opposite side were about fifty ex-service men wear­ing their war decorations, and in charge of Major D. R. Williamson. The relatives of the fallen were pro­vided with special seats in front of the memorial, and behind them stood the school children of the district. The band of Armagh Boys’ Brigade was present and played appropriate music from ten o’clock a.m.

The unveiling ceremony was to have been performed by Viscountess Charlemont but owing to the death of her father she was prevented from doing so. The duty was carried out by the Hon. Mrs. Philip Nelson Ward wife of Vice-Admiral Ward, and sister of Viscount Charlemont, V.L., J.P.

After the Guard of Honour and the ex-Servicemen had taken up their positions Major General A. R. Cameron; C.B., D.S.O. the officer commanding the troops in Northern Ireland ar­rived. The general salute was sounded by Buglers of the Royal Ulster Rifles, and afterwards Major General Cameron inspected the Guard of Honour and ex-Servicemen. During the inspection of the latter he chatted with several of the men, taking parti­cular notice of their decorations and medals.

Mr. L.C.L. Tottenham chairman of the War Memorial Committee then addressed the large assembly, and said that the unveiling of the memorial was to have been performed by Viscountess Charlemont but unfortunately and unhappily at the end of last week she was suddenly summoned to the death bed of her father whose funeral was taking place that day, consequently it was impossible for Viscount or Viscountess Charlemont to be present with them in Moy. The people were deeply disappointed as all knew of the deep and absorbing interest both took in the affairs and welfare of Moy and district. Lord Charlemont’s family had been connected with that part of the country for about 900 years. He had taken a special interest in the war memorial, and when he was approach­ed regarding a site, he granted the permission for its erection anywhere the Committee selected. In a letter he had written to Mr. Stevenson his Lordship expressed keen disappoint­ment at not being able to be present at the unveiling ceremony. He had asked his sister the hon. Mrs. Philip Nelson Ward to take    Viscountess Charlemont’s place, and she kindly consented to do so. She also took the keenest interest in Moy, and in that Memorial, and they all appreciated her kindness in coming to unveil it. (Applause). It was fitting that the army should be represented on the occasion, and they were   pleased to have present a most distinguished soldier-Major General Cameron, C.B., D.S.O., and they heartily welcomed him. It was to be regretted that Mr. Murray the hon. treasurer and for a time, hon. secretary of the War Me­morial Committee was unable to be present owing to ill health. He ex­celled himself in the raising of the necessary funds, and they were all under a deep debt of gratitude to him. There had been a splendid response by the men and women of that district to the call to duty, and it was a fitting thing that a memorial should be erected to the memory of the fallen, and the ap­preciation of those who also served.

The Hon. Mrs. Philip Nelson Ward in a few appropriate remarks apolo­gised for the absence of Viscount and Viscountess Charlemont and said as a member of a family long connected with Moy, she felt it a great honour to be asked to unveil their beautiful was memorial. It was befitting that the glorious deeds of those who died in the service of their country, and of those who had served should not be forgotten. They thought of their dead heroes that day who had laid down their lives so that others might live. In that memorial they were trying to pay them a great honour. She then unveiled the memorial, after which Major Williamson read the names of the fallen, and as he called out each name a comrade re­plied “killed in action, Sir;” or “Died of wounds Sir” as the case might be. The solemn proceedings had a touching effect upon those present. The “Last Post” was sounded by three buglers of the Royal Ulster Rifles, and then two minutes solemn silence observed. During this part of the ceremony the Union Jack on the Church was flying at half mast. At two minutes past eleven “Reveille” was sounded.

Major General A. R. Cameron, C.B., D.S.O., in an impressive address said it was a great honour to him to be asked to play a part at that unveiling ceremony. A proportionately large number came forward voluntarily and served in various units, and a few of them represented the noble army that held the battle front while the others were preparing and training. There was a splendid response to the call to arms by men who had no connection with the army, and it made it more difficult for them to leave their re­latives and businesses to fight for King and Country. They were in­spired by that instinct which ran so strongly amongst them in Ulster that they would see that Might would not triumph over Right. They felt an extraordinarily self-confidence in spite of the fact that they had to face a highly trained and heavily armed army, but they faced the dangers and difficulties with courage and determination. Major General Cameron then paid a high tribute to the 10th Irish Division, and to the 36th Ulster Division. He had seen a good deal of the latter Division in the early part of its career, and saw their high degree of gallantry in the field. They were men of splendid military discipline and civic behaviour. A very large number of those gallant men fell in action on that famous 1st. July 1916, when the Ulster Division won imperishable fame. The pressure on the French front had become almost unbearable. The Germans had made the most unrelenting attacks and the Ulster Division were given the difficult task of relieving the pres­sure on their ally. They achieved success in capturing the German position, and were the one Division that succeeded in gaining ground, and reaching the objective allotted, to them. They suffered terrible loss, and the memories of those brave men who fell were being honoured there that day. That memorial would help to instil to others the sense of duty to the State, a duty which had led those men to take up arms and en­dure the strain and weariness of a long war. It would help to inspire them with the gallantry of those men on 1st. July 1916, and on many other similar occasions. Then their loss though grievous and deeply mourned, yet their sacrifice had not been in vain. The band having played the National Anthem a great many beautiful wreaths were placed at the base of the memorial by relatives and others, amongst them being ones from the Royal Ulster Rifles placed by Capt., Ross Martin. O.B.E., from the Moy R.U.C. placed by Sergeant Atkinson; Moy Branch of the British Legion, by Comrades Mooney, Harkin and Crom­well, the ex-service Women’s Legion by Mrs. D. R. Williamson, War Me­morial Committee by Mr. L.  C.  L. Tottenham (chairman), and the hon. Mrs. Philip Nelson Ward. Amongst the relatives who placed a wreath was Wm. Bradley of Charlemont who had six sons who served, three of them being killed.

The following are the names of those who served; –

An interesting ceremony took place on Sunday afternoon at Moy, when a tablet to the late Sergeant G.A. Watson, M.T., Royal Army Service Corps, erected by the Comrades of the Great War (Moy Post) was dedicated. Sergt. Watson died on 3 August, 1919, at Dunlow, Moy, after a lingering illness, brought about through being gassed during active service in France.