This page contains three images, the names of the FALLEN and a report on the unveiling and dedication ceremony. 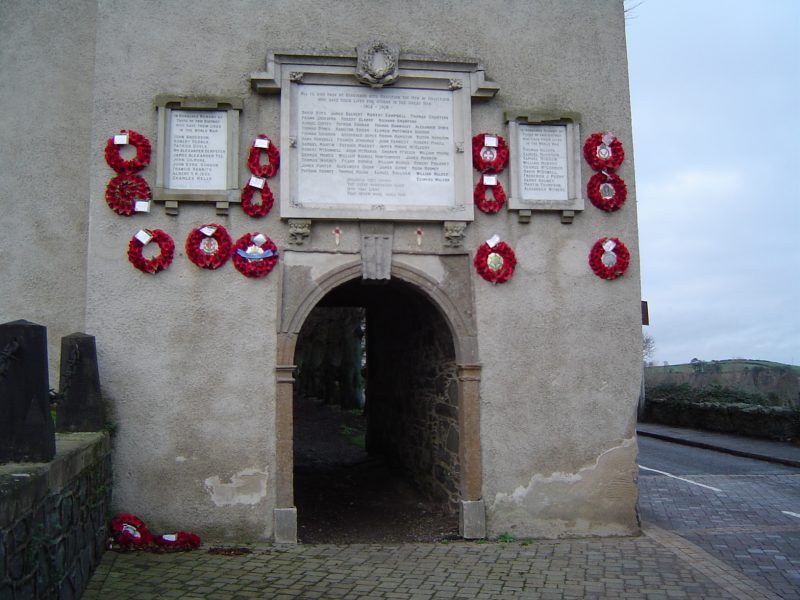 The Second World War and the Falklands conflict.

On Thursday Colonel Rowan-Hamilton, D.L., in the presence of a representative local gathering, unveiled at Killyleagh a handsome marble tablet, executed by Messrs Hastings, to the order of the Woman’s Work Guild, and placed on the flank tower of the castle at the end of the linden walk.  Surmounted by a shield and wreath, the tablet bears the following arresting inscription:

All ye who pass by remember with gratitude the men of Killyleagh who gave their lives for others in the great war, 1914-1918

The great surrender made,

That never more shall fade.

Col. Hamilton, after a few introductory words, said: Where could the Women Workers’ Guild have chosen a better site to have the tablet erected than upon this ancient tower which fronts the little town, and itself bears the scars and marks of honourable warfare?  Many of you from day to day pass beneath its archway.  There are those of you who, looking up at the names, may feel a sadness at the lost of husband, brother, or son; but that feeling of sadness will be tempered by the knowledge that a man of your blood died an honourable death in defence of his country and to preserve the freedom which we now enjoy.

The members of this Guild gave their time, their leisure, and their skill to making woollen garments and comforts which would alleviate the sufferings that the men at the front had greatly to endure.  One day every week they met to settle and arrange what parcels and medical aids they could dispatch abroad.  And this occurred all through the British Isles.  When the reserves were called up, and the men volunteered in their thousands to the colours, the women took up their jobs on the farms, in the houses of business, in the banks, and munitions factories, and, most naturally, in the hospitals, both public and private.  More than that, there were many who accompanied the troops as caterers, worked in the hospitals, and drove the dispatch riders in their cars well within the zone of fire.

The County of Down has not been behind in erecting memorials.  All through the United Kingdom you may see memorials, sometimes in churches, sometimes in chapels of various denominations, or in the great cathedrals.  If you visit the market towns you will see sometimes in the public gardens a group of men in khaki cut in stone; they may be in fighting attitude or lying wounded.  Or in some market place you may see a monolith or fountain with the names of those who went forth and did not return inscribed below it.  If you pass through the villages and hamlets you will often see upon the outskirts perhaps a white marble cross, or the angle of victory set up as a memorial.

The great events of a lifetime touch us; they are not easily forgotten.  We cannot forget the wonder, the anxiety we felt during the last days of July, 1914, as to whether we should be involved in a great European war.  If our anxiety was great, what must have been anxiety felt by the Belgians and the French, as to whether we should stand by them as allies?  This is how one of your war poets described their thoughts, their feelings, and expressions towards us, during this period, while the sands were slowly running out:

On Europe and the West the dim clouds brood,

Disperse, and gather again, and who can tell

What birth they hold within them;

But we know that should they break in tempest

On these shores, that you

Will link your lives with ours, your fate

Will stand beside us in the hurricane

Steadfast, whatever peril may befall.#0a0707

And we did stand beside them through all disaster and through all success.  Over here, when this thunderbolt of war and slaughter fell, we were far from the centres of activity, we were far from the great camps of Aldershot, of Colchester, of Salisbury Plain, and others through the country.  We did not hear the rumble of the guns or the tramp of cavalry.  We did not listen to the bands of regiments as they marched to their destinations.  Nor did we hear the rush of trains as they carried day and night horse, foot, and artillery to the great seaports of the south.  We only heard the echoes as it were of all this happening.  We heard that the ‘contemptible little army,’ as the Kaiser called it, had crossed the channel, shepherded and guarded by the fleet with silent guns.  We heard of its landing, and not long after of its first encounter on foreign soil.

But it is not my intention to go any further into the history of the war, or to allude to any battle by land or sea, to any sufferings of the troops and our allies, before they returned victorious.  And if then so now and for ever we must say:

Oh God! Thine arm was here, and not to us,

But to Thine arm alone ascribe we all

With thankful hearts and contrite spirits.

A bugler from the R.U.S.C. sounded the ‘The Last Post,’ and the company dispersed.

FOOTNOTE
The Killyleagh memorial unveiled the other day is a spacious panel of marble, with moulded casings and strong projecting canopy. Two massive consols with bold leaf treatment give main support to the tablet. The flankings, with the upper and lower coursings are carved with symbolic foliage.  The inscription panel is surmounted by a raised shield of carving outline, with a victory wreath and entwined ribbon. The memorial is placed above the arch of the ancient tower, and no more appropriate position could have been chosen than the shot scarred wall, with its battlements, loop holes and piercings, bearing silent testimony to strenuous defence in bygone days. 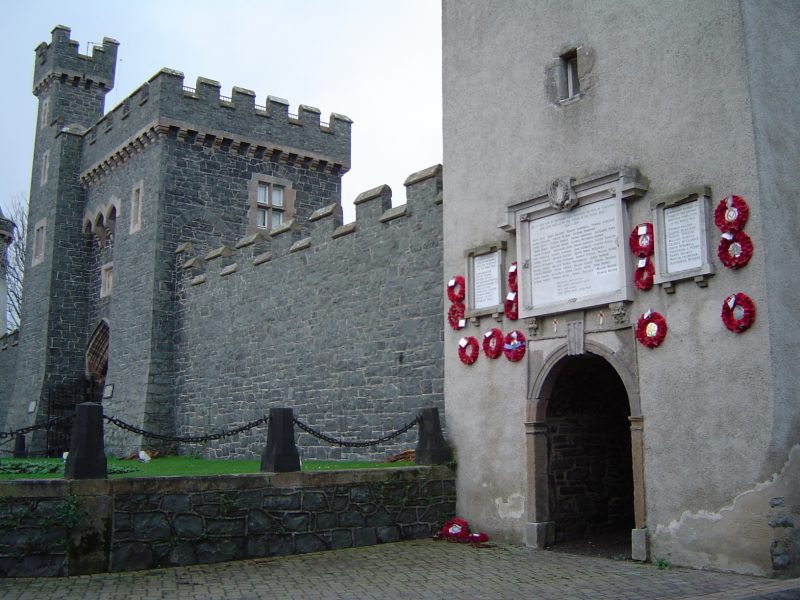 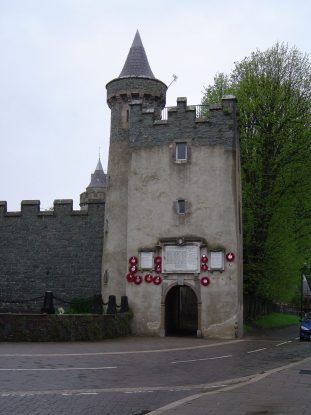