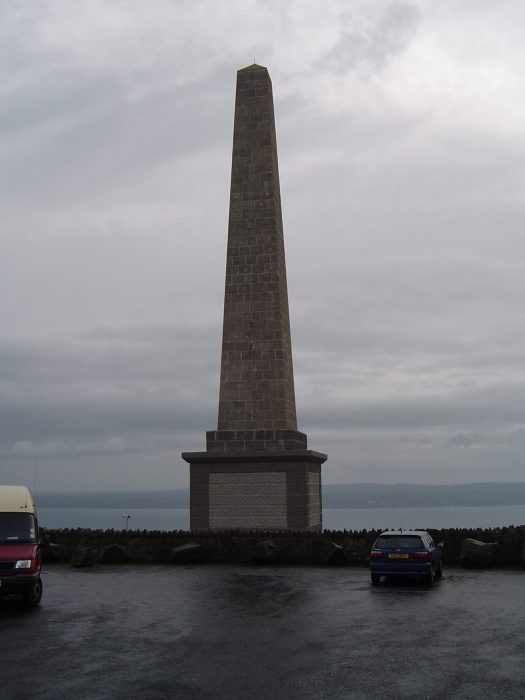 The County Antrim War Memorial is situated on Monument Road, Knockagh Hill, above the town of Greenisland and overlooking Belfast Lough, in the south of County Antrim.

The site is 935 feet (300m) above sea level on the northern side of Belfast Lough and offers a panoramic view of Belfast and the North Down Coast. It is the largest war memorial in Ulster and takes the form of a suitably proportioned obelisk, a replica of the Wellington Monument in the Phoenix Park, Dublin, except that it is exactly half the height at 110 feet (33.5m) high and the base is 25 feet (8m) square. The foundation stone of the Memorial was laid by the Countess of Antrim in 1922.

It was initially proposed to record in letters of bronze the names of every one of the fallen from County Antrim, the names were to be arranged alphabetically, irrespective of rank, the only exception being that the services would be kept separate and recorded in the order of seniority on the monument.

By mid 1922 about 2000 names had been collected. When the monument was eventually completed no tablets were fitted to it. To give an impression of the memorial’s huge size look for a car at the bottom left of the image.

On his death in 1935 Mr. Barton, the honorary secretary of Knockagh War Memorial Committee, in his will bequeathed £1,250 towards the cost of its completion. Following a review of the costs that would be involved, Antrim Rural District Council were asked to adopt the monument and pay the additional cost to have it completed, estimated to be £122.

The initial suggestion for the inscription was; –

“TO THE GLORY OF GOD AND IN PROUD AND AFFECTIONATE

REMEMBRANCE OF THE MEN OF COUNTY ANTRIM WHO FELL IN THE GREAT WAR.

THIS MEMORIAL IS ERECTED BY THEIR GRATEFUL COUNTY.”

YOUR MEMORY HALLOWED IN THE LAND YOU LOVED.”

In April 1937, thirty eight letters in the inscription were found to have been removed and another two letters damaged. To date it has been impossible to obtain information on a dedication or unveiling date (if any). It was eventually completed in late 1936 or early 1937.

The foundation stone of the County Antrim War Memorial on Knockagh Hill, Greenisland, was laid by the Countess of Antrim on Saturday afternoon. The ceremony was witnessed by a large concourse of people, who much admired the magnificent site upon which the monument to the glorious dead is to be erected.  The site is 935 ft. above sea level.  Scrabo hill, near Newtownards, which can be seen from this elevated position, is about 100 ft. higher. The memorial is to take the form of a suitably proportioned obelisk, a replica of the Wellington Monument in the Phoenix Park, Dublin, except that it is to be exactly half the size, viz 110 ft. high. It will be built of basalt rock hewn from a quarry on the same hill by ex-Servicemen, and the building work will later on be open to contract. The architect is Mr Henry Seaver, F.R.I.A.I. The accessibility of the site has been improved by the construction of a road at his own expense, by Mr H.D.M. Barton, of The Bush, Antrim, who has taken a leading interest in this scheme as hon. secretary and one of the hon. treasurers. There are three routes by which the hill may be attained. Many of those present on Saturday walked from Greenisland Railway Station by a winding, but precipitous footpath, whilst others travelled by motorcar from Belfast.

Viscount Massereene and Ferrard, H.M.L., for the county, who presided, said some people would ask: “Why have a county memorial?  Surely the local memorials are all that we want?” Well, he ventured to say most humbly that both local memorials and a county memorial were very proper. They wished to put up on that commanding site a permanent monument, one of which would last generations, and on it they wished to record the names of everyone in the county who served in the Navy, Army, Air Force or in any capacity, and who lost his or her life in the Great War. So it was that at a meeting of many influential people in the county that memorial was decided upon. A General Committee and an executive were formed, and after mature consideration they decided that the site on which they were standing was the most suitable. Many other sites were suggested, but the general opinion favoured that at Knockagh. It was a commanding site, and standing there they could see right away across the open sea to the coast of Scotland. It was visible from the great city of Belfast and from the greater part of North Down. It also looked over a very prosperous and thickly-populated part of the county of Antrim. On the whole it was fairly accessible for those who might wish in the future years to go up there and visit the memorial. The form of an obelisk was decided upon, and it would be built of County Antrim stone hewn from an adjacent quarry. Looking round that large assembly he was proud to think that before many more years had passed they would see the obelisk standing there in all its grandeur, as a mark for all time of the respect and gratitude which the county had for those who sacrificed their lives for their King and country.  (Applause.) It was proposed to record in letters of bronze the names of everyone of the fallen, the names to lie arranged alphabetically, irrespective of rank, the only exception being that the services would be kept separate and recorded in the order of seniority on the monument.  So far they had collected about 2000 names. The scheme had been supported by all ranks and classes, irrespective of politics and creed, and they had received much assistance from the clergy of all denominations in getting a record of names of the fallen. He would like to record his appreciation of the services rendered by their honorary secretary, Mr Barton, who had worked with tremendous energy and enthusiasm.  (Applause.) It was largely owing to what he had done that they had got on as far as they had, and reached a stage when they saw a large and representative assemblage there to witness the laying of the foundation stone. He ought to mention that the late Field Marshal Sir Henry Watson had intended to be present and to lay the stone, but it had been willed otherwise, and Lady Antrim had very kindly consented to take his place on that occasion. They were all very pleased to see her in the county, and he would speak for all in saying that they wished they could see her oftener. (Applause.) At the request of Mr J. Milne Barbour, D.L., M.P., Viscount Massereene presented to Lady Antrim a silver trowel, the gift of the subscribers.

Lady Antrim expressed her thanks for the handsome gift, and proceeded to perform the ceremony of laying the foundation stone. The “Last Post” was then sounded by buglers of the 1st Seaforth Highlanders, the Union Jack being lowered in respect for the memory of the fallen, and the National Anthem was sung.

The customary votes of thanks concluded the proceedings.

In September 1924 it was reported that ‘work had been resumed.’

A report in September 1926 stated that ‘workmen are presently engaged on the base.’

The burden of erecting the Knockagh Memorial developed in the course of time almost exclusively upon the late Mr. H.D.M. Barton and unfortunately at the time of his death in April last year [1934] there were still details of the Memorial to be completed and provision be made for its future care and upkeep.

Mr. Barton very generously had made provision for this in his Will. He had set aside £2,500 to maintain and keep in proper repair the War Memorial at Knockagh and the roads leading to same and the fences that surround same….. and to build a house for a caretaker and money to employ a Caretaker.

Mr. Barton died within 3 months of making the Will and the Executors would only make available £1,250.

A meeting of the subscribers, who could be traced, was held on 18th July 1935 and it was resolved that the County Council be asked to take over the care and maintenance of the Memorial and they be asked to carry out in co-operation with the War Memorial  Committee the work necessary for the completion and repair of the Memorial and its surroundings, and if they agreed the War memorial Committee would pay over the balance of the money raised (£120) plus the sum of £1,250.

The original proposals that the names and regiments of those who gave their lives should be put on the monument was found unsustainable and the suggestion had to be abandoned due to the difficulty and expense involved were.

The initial suggestion for the inscription was;-

“TO THE GLORY OF GOD AND IN PROUD AND AFFECTIONATE REMEMBRANCE OF THE MEN OF COUNTY ANTRIM WHO FELL IN THE GREAT WAR.

THIS MEMORIAL IS ERECTED BY THEIR GRATEFUL COUNTY.”

YOUR MEMORY HALLOWED IN THE LAND YOU LOVED.”

At a meeting on 10th May 1935 a decision was undertaken to carry out an inspection of the memorial and submit suggestions to complete the project.

The estimate was over £800. The work included the completion of the Monument including the construction of a house for a Caretaker, several heavy garden seats, railings and gates, etc.