This page contains four images, the names of the fallen 1914-1918 and 1939-1945, a description of the original Dervock Institute Building and a report on a fundraising bazaar. More images available on request at uwms@outlook.com 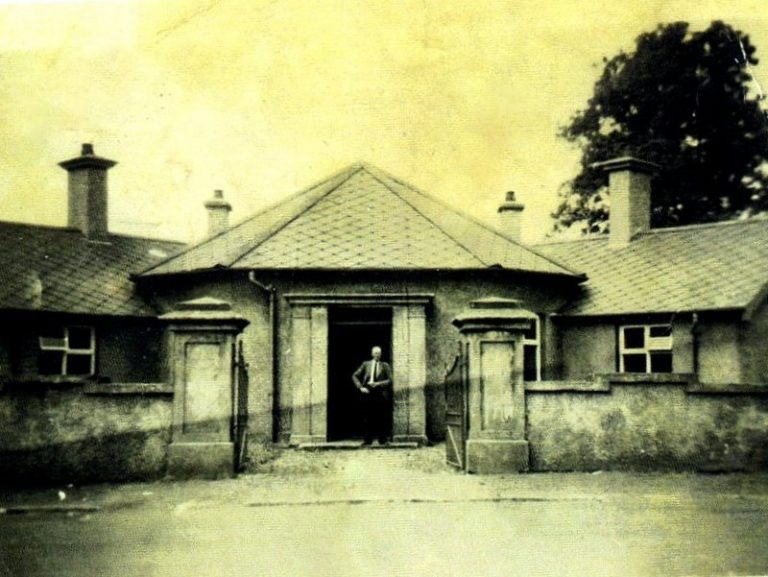 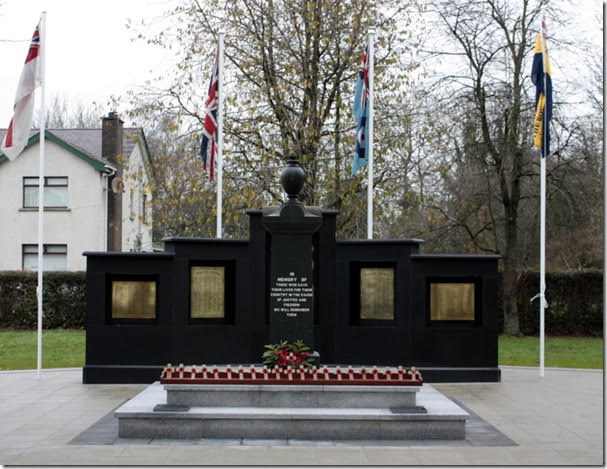 THESE GAVE THEIR LIVES.

“THE SOULS OF THE RIGHTEOUS ARE IN THE HANDS OF GOD.” 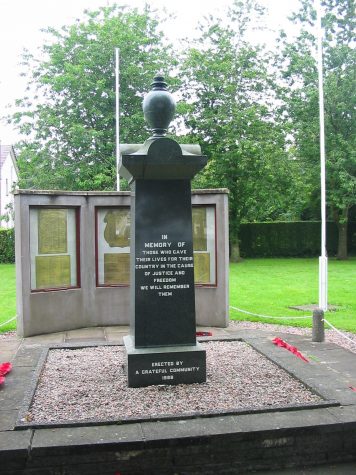 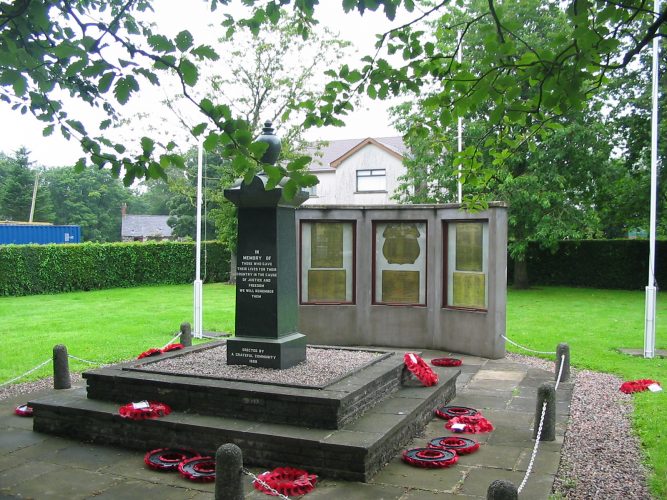 ‘Dervock and district sent forth their full quota of fit, sturdy lads for the great game in the world arena of war. They placed everything, even to life itself, at their country’s service, and it is a gratifying fact that such a splendid spirit of self-sacrifice has not been forgotten. The good folk of the Dervock district remember those who sprang into the breach; and while expressing in a practical manner their appreciation of the service of those who have returned, they have raised a fitting monument to the gallant dead.  The Dervock War Memorial Institute-the first, perhaps, to be erected in Ireland-is almost completed.  It comprises a main hall, sitting accommodation for upwards of 400 persons, together with large reading and recreation rooms, and a splendid kitchen.  The cost incurred in building was £2000, the site being placed free at the disposal of the Building Committee by Captain C.G. Macartney, Lissanoure Castle. The committee, of which Dr. R. C. Miller was chairman, and Mr Samuel Killen, C.P.S., honorary secretary is to be congratulated on the success of the project, in which they had generous and spontaneous support.’

Some time during the 1980s the Institute was demolished. The brass remembrance tablets are now displayed in a Memorial Garden.

In memory of those who gave their lives for their country in the cause of justice and freedom.
We will remember them.
Erected by a grateful community 1988.

On Monday the Institute opened its doors to the public, occasion being a bizarre, the object of which was to raise £800 to cover the balance of the contract price, and to furnish and equip the building in a style worth of its splendid architecture. The institute was decorated gaily with bunting, and the bazaar opened auspiciously. The various stores were laden with beautiful and valuable articles, claiming a host of ready purchasers.  Find weather prevailed, and there was a large attendance present when Dr R. C. Miller called upon Captain C.G. Macartney to preside at the opening ceremony, which was gracefully performed by Mrs. S. J. Lyle, Ballycastle.

Captain Macartney said it afforded him particular pleasure in accepting their invitation to preside over that day’s proceedings.  He was certain, and sorry also, that there was some present to whom that would be a sad occasion, bringing remembrance of loved ones lost.  To those they extended heartfelt sympathy.  What a wonderful and noble part their womankind had played in the late war in spite of awful troubles and sorrows that could not be conceived.  The lady upon whom he would presently call to open the bazaar was a striking example of the noble, glorious women he had so inadequately tried to portray.  They are sorry that her gallant husband could not be present that day.  (Applause). Undoubtedly there are many ex-soldiers present, and he would like to say a word for them.  He wanted to put the soldier’s case before them as well as possible.  Everyone knew and would admit that there was no one better loved than the gallant soldier-boy.  (Laughter and applause.)  He really thought that it was quite possible that there were some who thought the soldier was different from the ordinary civilian.  In his own experience, he had found the boys just a human and sympathetic as any ordinary person.  It was everyone’s duty to help the soldier, and to see hat he had a chance to be happy.  He hoped that these remarks would be interpreted in the spirit in which they were presented, merely and sorely to further cement the esteem, regard, and brotherly love which he hoped would continue to exist between all classes in the Dervock district. (Applause.) As he had said, the soldier was human, and liable to err.  What he did not like was to be ostracised from ever for any little mistake.  The soldier wished to be laid firmly and justly, but he despised and he hated to be led by weak, vacillating people in authority, who said one thing and do the opposite.  While the primary object of the war memorial was to perpetuate the memory of the gallant dead it was also for the soldier who had been spared to come home.  He trusted that the Institute would always offer a whole-hearted welcome to any soldier who wish to participate in the entertainment it afforded.  He appealed to the men to do their best for the interests of the community at large.  He took them back to the days when they were part of the “good old D Company” of the 12th R.I.R.  if they retained of the old spirit of “D” company he was certain that Dervock would be the most prosperous, peaceful, and content little spot in the North of Ireland.  Applause.  If they all pulled together, it would surely be a simple, manly additional respect to the memory of those brave, heroic comrades no longer with them.  He had great pleasure in calling upon Mrs Lyle to declare the bazaar open.

Mrs Lyle said she felt greatly honoured in being asked to declare that the bazaar open.  She was especially interested in the welfare of the men of “good old D Company”.  She was glad that the memorial to those who had fought to make their homes secure had taken that original and practical form.  Those gallant men had stood between them and ruin.  They were only average men, perhaps, but the divine spark had sent them out knights errant.  They were thankful for those men who had died at a highest standard of manhood, and left them richer by their memory.  They were now doing what they could to perpetuate the memory of those who had fallen, but a responsibility remained.  They must see that the parents, wives, and children had their rights, and that the men who came home were looked after.  Applause.  Many of these had suffered in health, and care should be taken that nothing was left undone for their comfort.  Let them think of the black days of 1914, when nothing was considered too good for their fighting men, and let them remember by their own home-bred country boys went back time and begin into that hideous hell in France.  Applause.  She hoped that the Institute would be of great usefulness to men who came back as well as a fitting memorial to their dead. (Applause)

A beautiful bouquet was handed to Mrs Lyle by Miss Minnie Patrick, the little daughter of Mr and Mrs JA. Patrick, Dervock.

The vote of thanks by Mrs Lyle and Captain McCartney was passed in motion of Rev Maxwell a seconded by Rev Samuel Thornhill.

Saves proceeded, and within the hall, and in the immediate vicinity a scene of activity was witnessed which augured for the complete success of the bazaar.  The appended list of stallholders and those in charge of games competitions: –

At the re-opening ceremony on Wednesday, and the motion of Dr Miller, the chair was taken by Mr L. Denny, The Whins, Portrush, who after a few appropriate remarks, called upon Mrs Stuart, Glennmanus House, Portrush, to open the second day’s proceedings.  This task Mrs Stuart performed in graceful fashion; and was presented with a bouquet of flowers by Miss Eleanor Davidson.

A vote of thanks to the Chairman and to Mrs Stuart was proposed by Major J. A. Montgomery, seconded by the Rev J. McIlmoyle, and cordially pasted.