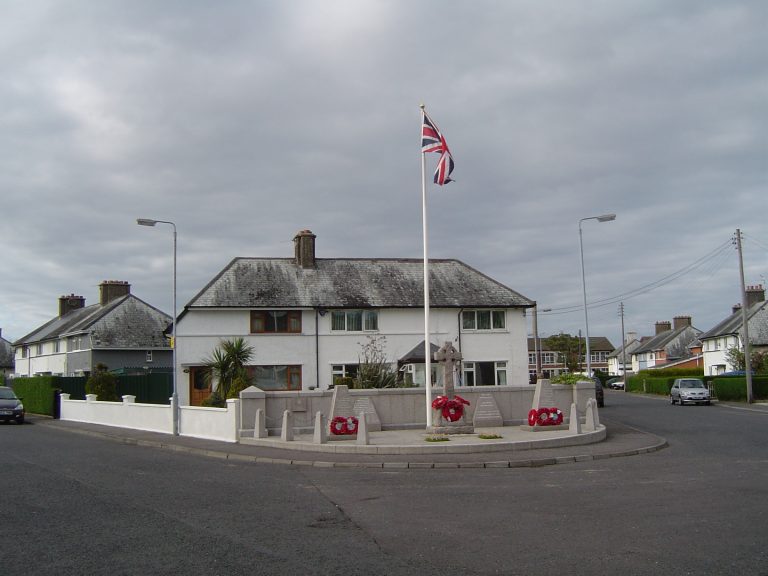 The Colony was the local name given to a development by the Irish Soldiers and Sailors Land Trust in 1925 to provide homes for returning heroes (ex-servicemen) and their families. In the 1960s-70s the sitting tenants or their widows were given the opportunity to purchase.

This Website is dedicated to the memory of the men and women from Ulster who served in the armed forces of many Allied countries during the Great War (1914-1918) and World War II (939-1945).
All members of the Armed Forces who joined from Ireland were volunteers. These volunteers marched away through cheering crowds with fife, drums and rifles.
Many never came back. Many who did return were maimed, blinded or demented by the carnage of mechanised war which they had experienced. In many cases they returned not to a ‘Land fit for heroes’ but to a life of unemployment and poverty.

William Holland was the older son of William (Spirit Merchant) and Sarah Holland, Main Street, Trillick, Co. Tyrone. Corporal William Holland was reported missing during the German Spring offensive on 29th March, 1918 while serving with 9 Btn. Royal Inniskilling Fusiliers. He has no known grave. He is commemorated on Panel 38 to 40, Pozieres Memorial, France, alongside thousands of others who made the supreme sacrifice. He is also commemorated on the War Memorial Clock, Christ Church, (Church of Ireland) Trillick , Co. Tyrone and on the Enniskillen War Memorial.

Albert Switzer, M.M. Royal Field Artillery, was the only son of Albert (Coal Merchant) and Mary Jane Switzer, Primrose Street, Belfast. He was born in 1898 and volunteered, along with his friend Willie McBride, in September, 1914, expecting to serve together. Following their basic training Willie served the entire war in India, Albert spent it on the Western front. He was at the Battle of the Somme, where 57,000 of his colleagues became casualties on the first day. He was Mentioned in Dispatches and awarded the Military Medal for his actions on the battlefield. He first travelled to the Somme as a khaki-clad teenager, and returned half a century later as an aging ex-serviceman.