This page contains four images, the names of The Fallen of both wars, and a report on the Unveiling Cermony. 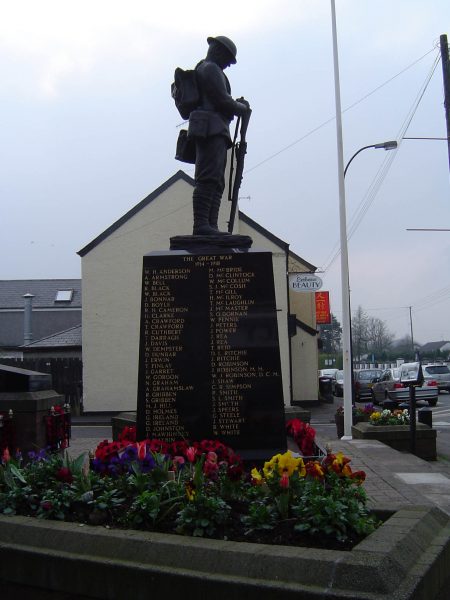 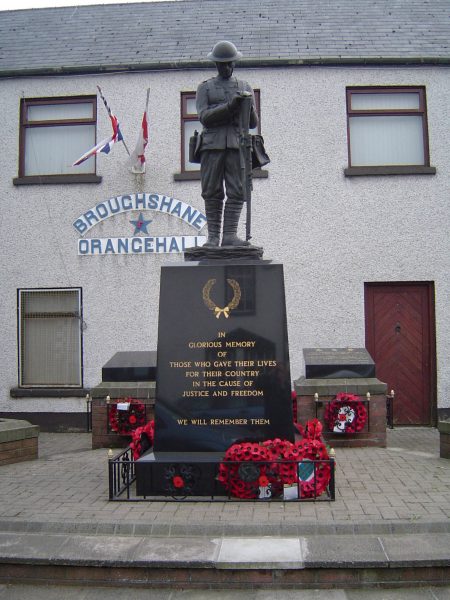 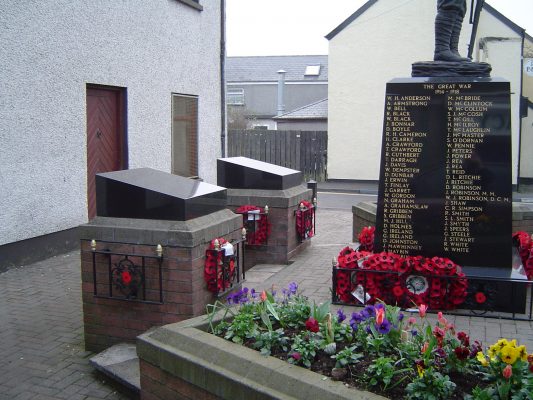 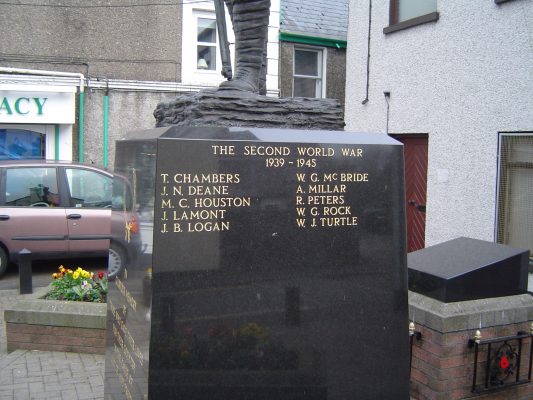 The 5½ foot bronze soldier, gun pointing towards the ground, stood impressively on top of the recently-finished foundation.

Below him on two granite plaques are etched the names of the 72 soldiers from the Broughshane area who died in World War One and Two.

Two smaller plaques at either side of the main Memorial are dedicated to the memory of two of the village’s citizens who have died in the current troubles.

Many of the surnames inscrib­ed on the two plaques beneath the proud soldier are the same, suggesting perhaps that families had to bear the pain of more than one death.

And, by a remarkable co-incidence, the name George Ireland and James Rea are etch­ed on the plaque twice.

The Memorial is the end result of many months of painstaking work and fund raising by several Broughshane villagers.

Ex-Serviceman Jim Peters, who spent 22 years in the Army, orchestrated the effort.

“I’ve just come back to the village after being away for long time and I felt that Broughshane should have something to remember the brave men and women who died during the wars,” said Jim.

The man who did his homework on the soldiers who died is military enthusiast Alistair Robinson, from Tullygrawley,

With the help of Guardian readers, Mr. Robinson was able to compile the list of names in time for inscription by sculptor Edward Barton from Belfast.

By the time the parade started just after 2.30pm the numbers had grown so large that stewards were forced to clear a path for the Ballymena Silver Band.

After the opening hymn the Memorial was unveiled by Colonel R.B. Morton T.D. before the Venerable Archdeacon T.V. Stoney, of St. Patrick’s Church, read the Bidding:

“We remember at this time, all those, the brave and the true who have died the death of honour and arc departed in the hope of resurrection to eternal life. Especially the officers of our land, sea and air forces, to whom it was given to lay down their lives for the cause of freedom and justice. To this end, we call upon all present to offer prayer to Almighty God, that He will bless this Memorial to be dedicated to His glory.”

At exactly 3pm Rev. W.J.A. Armstrong, of 2nd Broughshane Presbyterian Church, began to read the names of those on the Memorial.

After the roll of honour they said the Act of Remembrance:

“They shall grow not old as we that are left grow old. Age shall not weary them or the years condemn. At the going down of the sun and in the morning, we will remember then.”

The full list of names on the War Memorial reads:

If you can supply additional information, photographs of War Memorials in the nine counties of Ulster, or wish to report broken links, make comments, suggestions, requests, etc.