This page contains five images, the names of the FALLEN in both World Wars and a report on the unveiling and dedication ceremonies 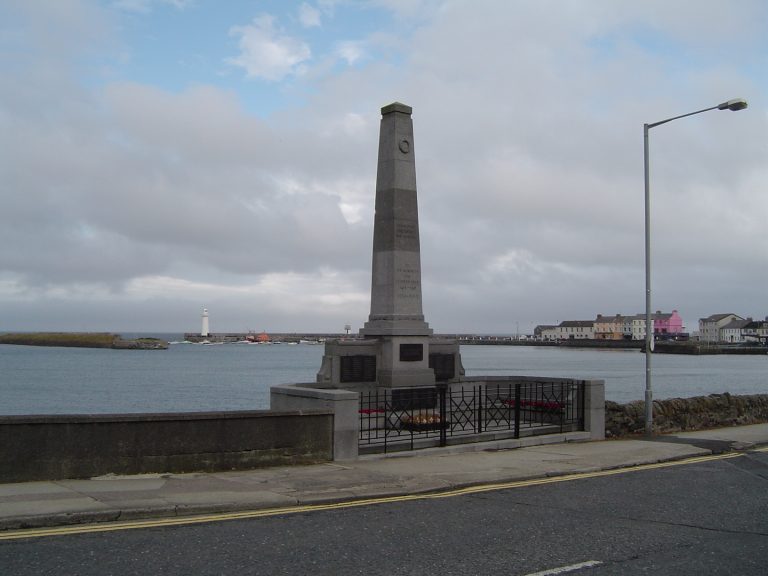 The Donaghadee and District War Memorial

Donaghadee and District War Memorial is located at the junction of Shore Street and Union Street. It was unveiled on the 1st July 1926 by the Marchioness of Londonderry and Rev. Robert Andrews, Shore Street Presbyterian Church, offered the dedicatory prayer.

About 300 yards north of the War Memorial is Shore Street Presbyterian Church which has a war memorial stained glass window.

‘The memorial, which has been erected in the centre of the promenade, takes the form of an obelisk, 30 feet (9.5m) high constructed of Connemara marble. Inscribed on the obelisk are the words:’

and beneath is the inscription:

“Erected in memory of the glorious dead,” and the quotation:

“At the going down of the sun and in the morning we will remember them.”

‘At the base of the monument are two panels, on which are inscribed the names of sixty-one men from the Donaghadee and Millisle districts who fell in the Great War. The memorial cost £1,100, and the expenditure was met by means of a public subscription organised by a committee.’

The two original panels have recently been replaced by four panels. The names below are taken from the new panels.

The Names of the FALLEN in the Great War.

The Names of the Fallen in the Second World War.

“We Will Remember Them”

Simplicity and solemnity marked the unveiling of the Donaghadee and District War Memorial by the Marchioness of Londonderry, yesterday afternoon [July 1, 1926]. The memorial, which has been erected in the centre of the promenade, takes the form of an obelisk, 30ft high constructed of Connemara marble. Inscribed on the obelisk are the words: “Donaghadee and District War Memorial, “and beneath is the inscription: “Erected in memory of the glorious dead,” and the quotation: “At the going down of the sun and in the morning we will remember them.” At the base of the monument are two panels, on which are inscribed the names of sixty-one men from the Donaghadee and Millisle districts who fell in the Great War. The memorial cost £1,100, and the expenditure was met by a means of public subscription organised by a committee, of which the hon. secretaries were Mr. S. J. Callaghan and Mr. R. R. Webb, M.M., J.P., Mr. George de Lacherois, J.P, gave the site. Mr. H. Berrington presided at the ceremony, which attracted a large concourse of people, including the local company of Girl Guides and a detachment of the British Legion.

The proceedings opened with the singing of the time-honoured hymn, “O God, Our Help in Ages Past,” followed by the reading of a portion of scripture by the Rev. E. B. Cullen, M.A., past-President of the Methodist Church in Ireland. Mr. J. S. Callaghan then read the names inscribed on the obelisk.

The Marchioness of Londonderry said it was her proud duty to unveil the obelisk to the memory of those in Donaghadee and district who, forsaking all they held dear, sacrificed their lives for their King and country in the greatest of all wars. Although it was ten years since the first Battle of the Somme, the noble deeds of those men were enshrined in the hearts of all. The record of the men of Donaghadee and Millisle was second to none. They served in every theatre of the war and in all branches of his Majesty’s forces, as well as in the mercantile marine. Many of them, too, were prisoners of war in Germany. One young man, whose names would live forever among the people of the district, Lieutenant Wmilliam David Kenny, whose heroic conduct earned for him the posthumous award of the Victoria Cross, was numbered among the honoured dead, and his name was to be found on the memorial which it was her privilege to unveil. They had endeavoured, and were endeavouring, to ensure that the sacrifices which had been made would not be in vain, and that the ideals for which they fought would still be maintained. Such a striking tribute from their friends would ever be a reminder to those who followed after of the Lord’s sublime teaching in the Gospels – “Greater love hath no man than this, that a man lay down his life for his friends.”

Lady Londonderry then removed the Union Jacks which had covered the memorial, and after the sounding of the “Last Post” by buglers of the Durham Light Infantry, the Rev. Robert Andrews, Shore Street Presbyterian Church, offered prayer.

Mr. George de Lacherois, on behalf of the subscribers, proposed a vote of thanks to Lady Londonderry. He said he knew that he was only expressing their wishes when he said how much they appreciated Lady Londonderry’s presence on that occasion. They were always happy in having the Londonderry family to encourage and lead them, and identify themselves with the interests of the people.

The Marquis of Londonderry, K.G., replying, said Lady Londonderry and he always prided themselves on the fact that they shared with the people did with them, their joys and sorrows. He esteemed it a great privilege and honour that Lady Londonderry should have been asked to unveil that splendid and lasting tribute to the memory of those whom they held in such esteem. The First of July would ever be a memorable day in their hearts. On that day ten years ago the flower of their population advanced at Thiepval, and won immortal glory and honour. Some of them had come back to tell of the deeds of those heroes in France, and to all they had erected that magnificent memorial.

The Chairman, on behalf of the committee, on formally handing over the memorial to the custody of the Urban District Council, expressed regret at the absence of the Right Hon. Mr Justice Brown, who was o have occupied the chair and perform the duty which now devolved upon him. His absence, the chairman said, was the more regrettable because from the moment the question of the erection of the memorial was mooted no person had worked harder than he to bring the project to its present successful issue. Proceeding, the chairman said it was his duty and privilege, on behalf of both subscribers and committee, formally to hand the memorial over to the District Council as the properly constituted body. He did so with the knowledge that the future of the memorial and its care and safekeeping were in the right hands.

Mr. J. Taylor Stronge, chairman of the urban district council, accepting the memorial on behalf of the town, said he felt that a sacred trust had been conferred upon them – a trust which would be carefully guarded and reverently fulfilled. No monument was needed to keep alive the memory of those splendid men who so unflinchingly carried out their duty to King and country. Their memories were enshrined in their own hearts, and would never fade, and would never fade; but it was a fitting thing that an outward and permanent symbol of their gratitude should be erected in their midst, so that those passing by might be reminded of the part played by the men of the district in the war. He thanked the subscribers and committee for the results of their efforts and assured them that the memorial would always be their most cherished possession.

The ceremony concluded with the sounding of “Reveille” and prayer by the Lord Bishop of Connor and Dromore (Right Rev. Dr. Grierson).

A large number of wreaths were subsequently placed on the memorial, the first, from the children of the town, being carried by twelve pupils drawn from the local schools, who sang Kipling’s “Lest we forget.” Other wreaths were placed by Lieut-Colonel J Rowan Hamilton, D.S.O., M.C., accompanied by Captain J, Wallace, M,C,, representing Major-General E(?) F, Ready, C.B, C.M.G., C.S.I., on behalf of the Army in Ulster; Messrs John Bennett and H. Louden, on behalf of the Donaghadee branch of the British Legion; Mr. J. T. Stronge, on behalf of the urban council; Lieutenant Samuel Jamison, on behalf of the Millisle district; and Mr. H. Berrington, on behalf of the War Memorial Committee.

Tribute to Those Who Did Not Return.

Donaghadee’s record in the war is worthy of the patriotic traditions of the town.     Some 250 men and women volunteered and rendered great service to King and country, and townspeople have shown in a very practical manner that they appreciate all they did during the dark days of war. They subscribed £2,000 towards giving the and girls a welcome home, and on Friday evening, 21st June, about 130 of those who   have received cheques, and were entertained to a delightful social and concert, which was held in the local Orange Hall.

He thought that first of all he should thank the people of Donaghadee, who respond so generously and subscribe so liberally to the fund—the committee had asked him particularly to thank them on their behalf.  They did not meet with any re­fusals, but   the public cheerfully put their hands into their pockets and subscribed. Mr. Graham pro­ceeded to thank those who subscribed to the first appeal, which realised £1,200—that, he thought, spoke volumes for the generosity of the people of Donaghadee.      He also had to thank those who sup­ported the various entertainments that were organised from time to time, and which had brought in sum of about £800.

Turning to those who took an active part in those entertainments and who had to be thanked, Graham mentioned the Kircubbin Players, the Killyleagh Choral and Dramatic Society, Mr. Faulk and his troupe “Faulat on Parade” and the Portaferry Players Then there was money which was raised in various other ways. There was a concert by the Brownies, which was organised by Miss C. Campbell, and which raised £40; a fete in the Commons, which resulted in the splendid sum of £271, and in that effort the Tennis Club, the Bowling Club, and the Red Cross, the Boys’ Brigade and the Girls’ Life Brigade (these two organizations arranged a fancy dress parade), all pulled their weigh while Mr. Samuel   Angus and his ponies helped in raising that mag­nificent sum. Miss Sadie Lamont staged a Christmas pageant, the Girl Guides gave part of the proceeds of a concert, and the promoters of the Visiting Queen Dance also rendered valuable financial help. 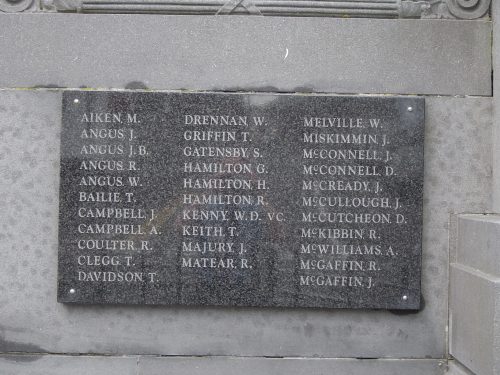 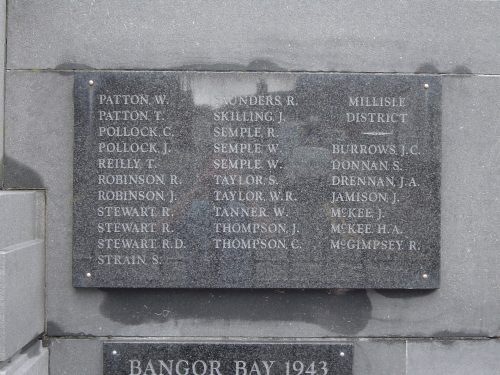 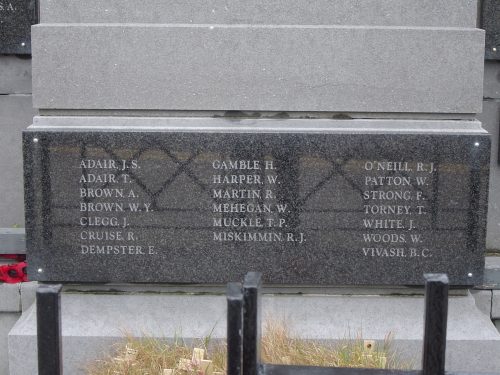 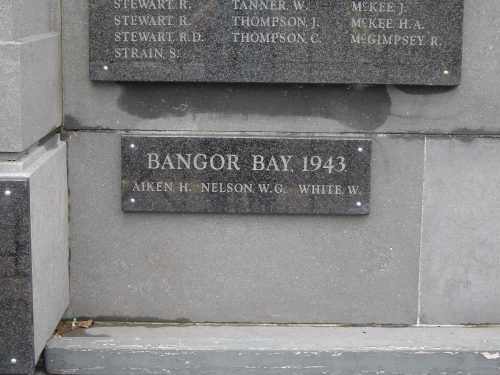