This page contains one image and a report on the unveiling and dedication ceremony. 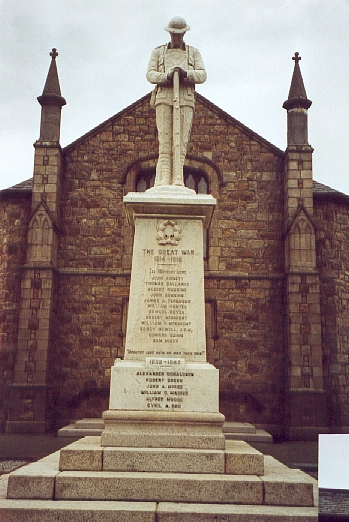 At the close of the morning service, held at twelve o’clock yesterday in the Mourne Presbyterian Church, Kilkeel (of which the Very Rev. Dr. M’Mordie, M.A., is the senior minister and the Rev. Herbert Martin, M.A., his assistant and successor), a handsome war memorial in connection with the congregation was unveiled and dedicated. The memorial, which has been erected in front of the church, was executed by Messrs. Purdy and Millard, Belfast, and takes the form of a solid granite pedestal surmounted by the figure of a soldier, in full fighting kit, which has been excellently sculptured in white marble. Upon the front and sides of the base are inscribed the names on the congrega­tional roll of honour, and below appears the text:-“Greater love hath no man than this, that a man lay down his life for his friends.” (St. John xv., 13):

There was a large attendance at the ser­vice, which was conducted by the Rev. Her­bert Martin, B.A., the special preacher being Major-General the Very Rev. J. M. Simms, C.B., C.M.G., K.H.C., D.D., LL.D, M.P., ex-moderator of the General Assembly, who deli­vered an impressive sermon from the text “These all died in faith” (Hebrews xi., 13).

The unveiling ceremony was performed by the Right Hon. the Earl of Kilmorey, D.L., Mourne Park, who said that those men, when the hour of danger threatened, never hesitated, or paused to ask the reason why, but answered the call of duty like men and like worthy sons of that old Kingdom of Mourne, of which they were all justly proud and loved so well. The “Last Post” was then sounded by buglers of the West Kent Regiment, and was followed by two minutes’ silence.

The dedicatory prayer was then offered by Major-General the Very Rev. Dr. Simms.