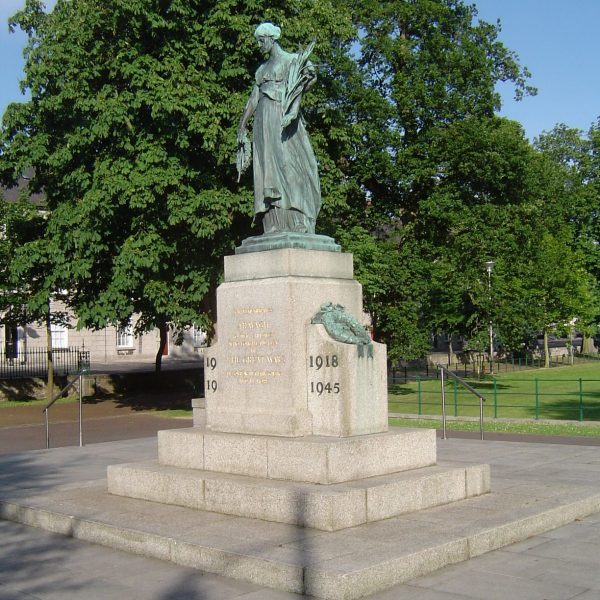 The memorial is constructed on a base of grey Cornish granite, rising from two steps. This pedestal bears on the front the inscription:-

Who fought and fell

In Sorrow, in Thanksgiving,

The figure on the pedestal is intended to personify “Peace with Honour.” She holds in the left hand a palm leaf, which is symbolical of peace, while in the right she holds a wreath of laurels, towards which her head is turned in thoughtful contemplation, conveying to the observer the feeling strong in all our hearts of glory and honour to the dead, the memory of whose glorious self-sacrifice the Memorial is intended to perpetuate.

When W. Major J. C. Boyle, D.L., High Sheriff, on behalf of the Memorial Committee and the Mall Trustees, handed over the memorials (this memorial, the Boar War Memorial and a Russian Gun captured in the Crimea) to the Armagh County Council he said the committee had found that there were so many names of the fallen that it was impossible to ensure they had obtained them all.  Therefore, rather than omit one name the committee had decided to have none.

Nearby is a memorial dedicated to the memory of the officers, non-commissioned officers and men of the Princess Victoria’s Royal Irish Fusiliers who fell in the service of their country during the South African Campaign 1899 – 1902 and a cannon from the Crimean war.