This page contains seven images, the names of the fallen 1914-1918 and a report on the unveiling and dedication ceremony. 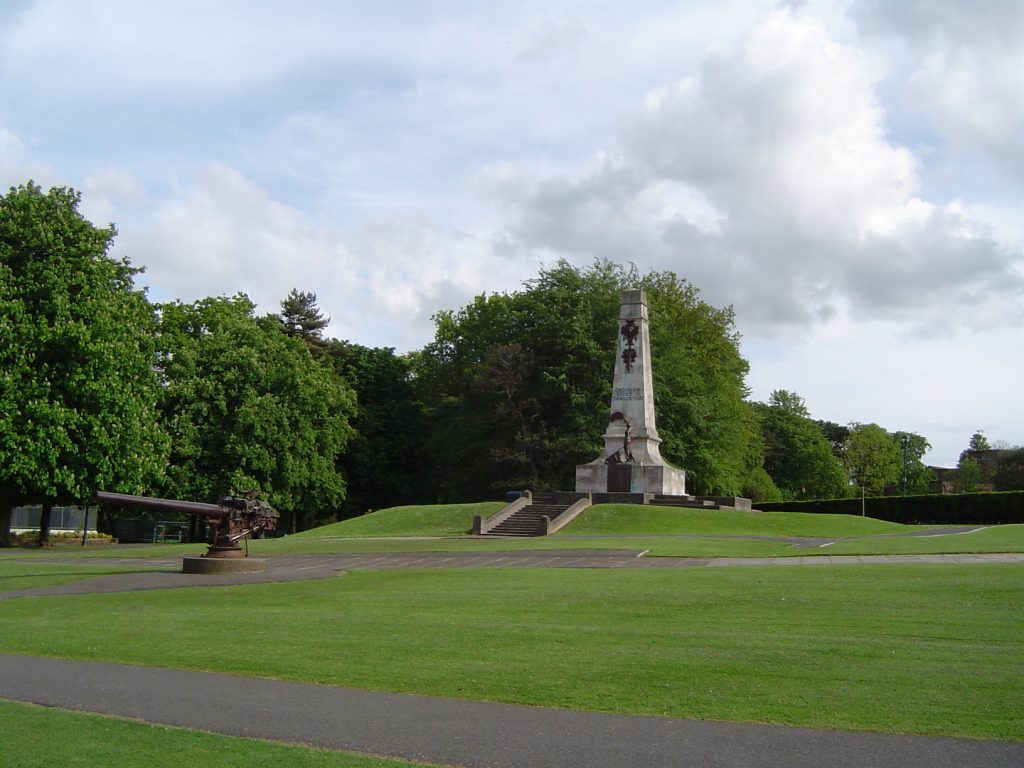 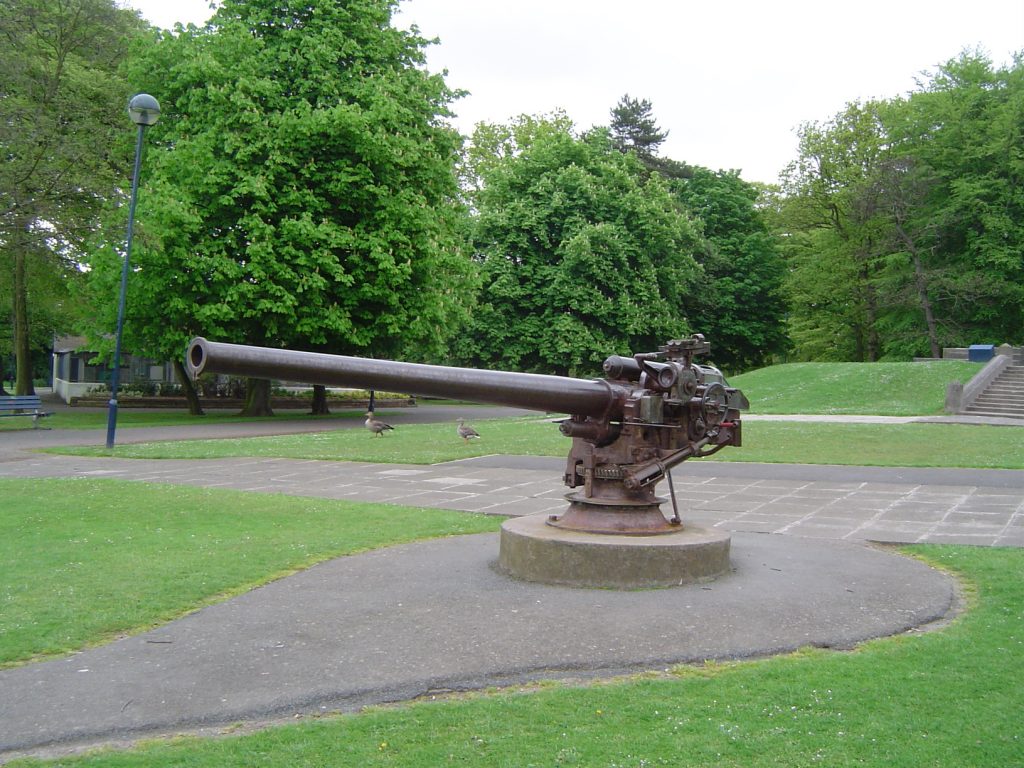 THE NAMES OF THE FALLEN 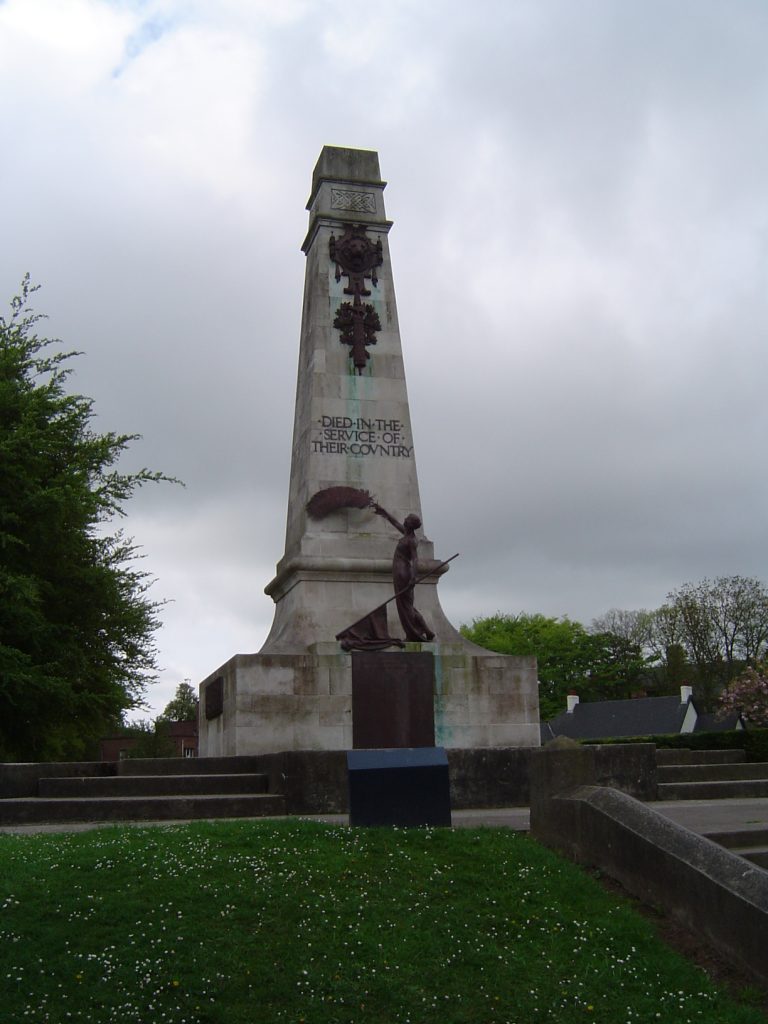 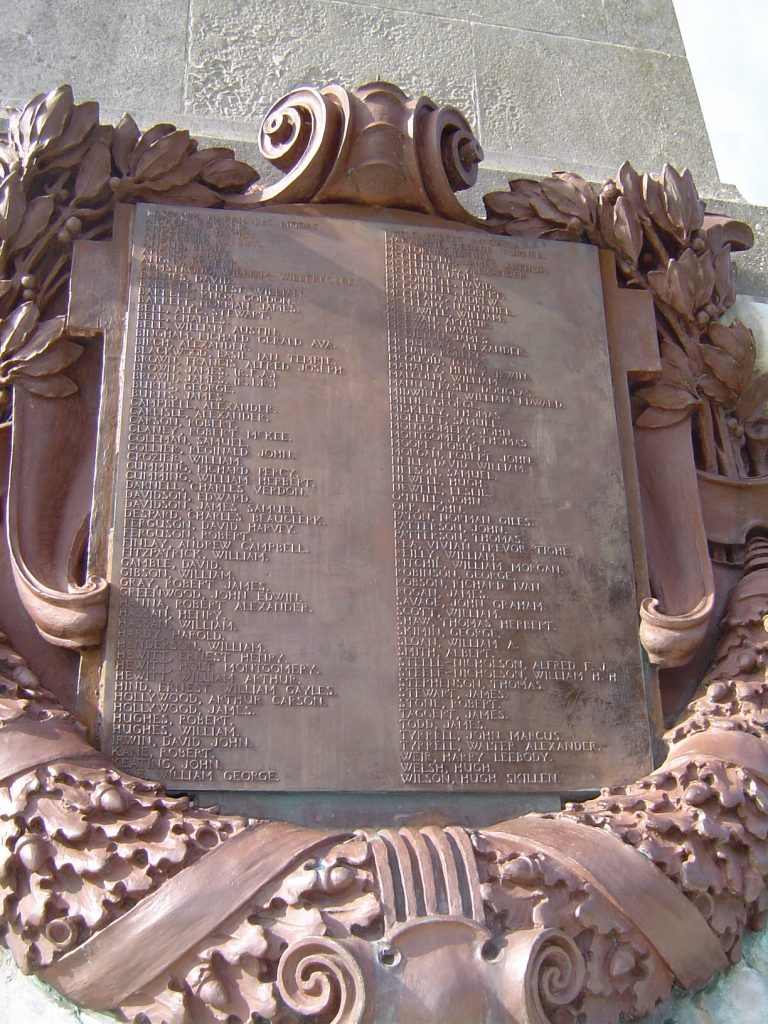 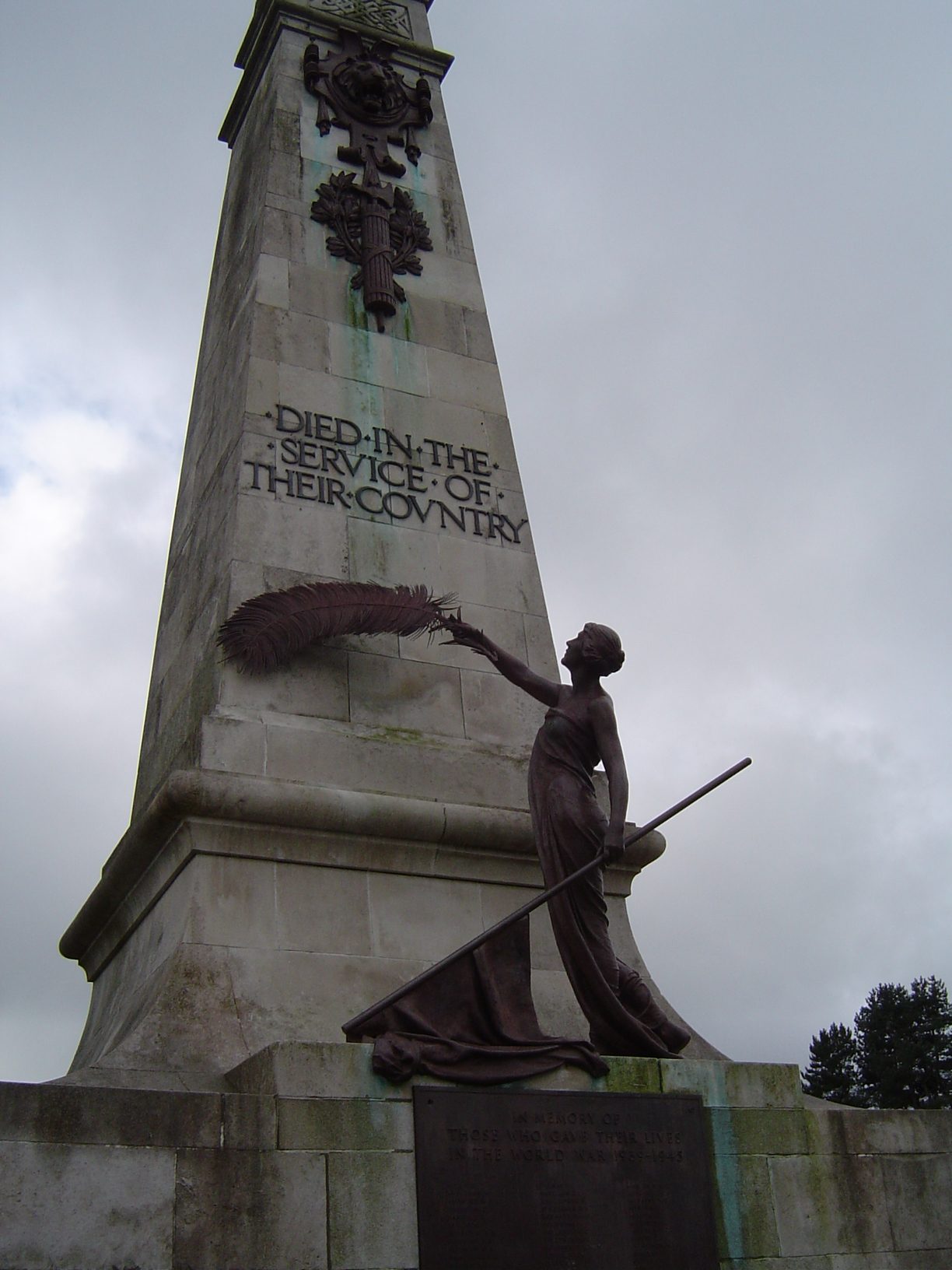 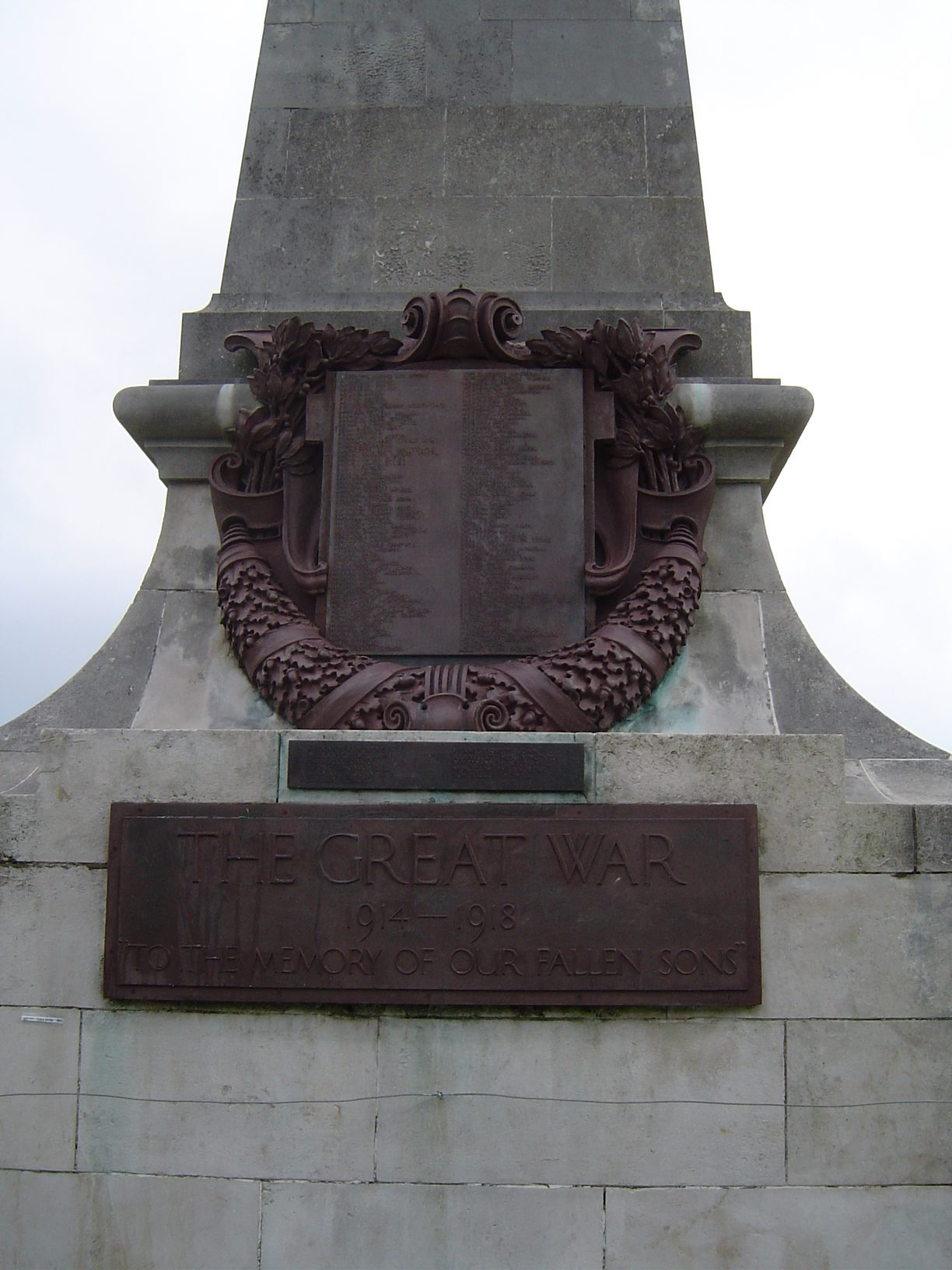 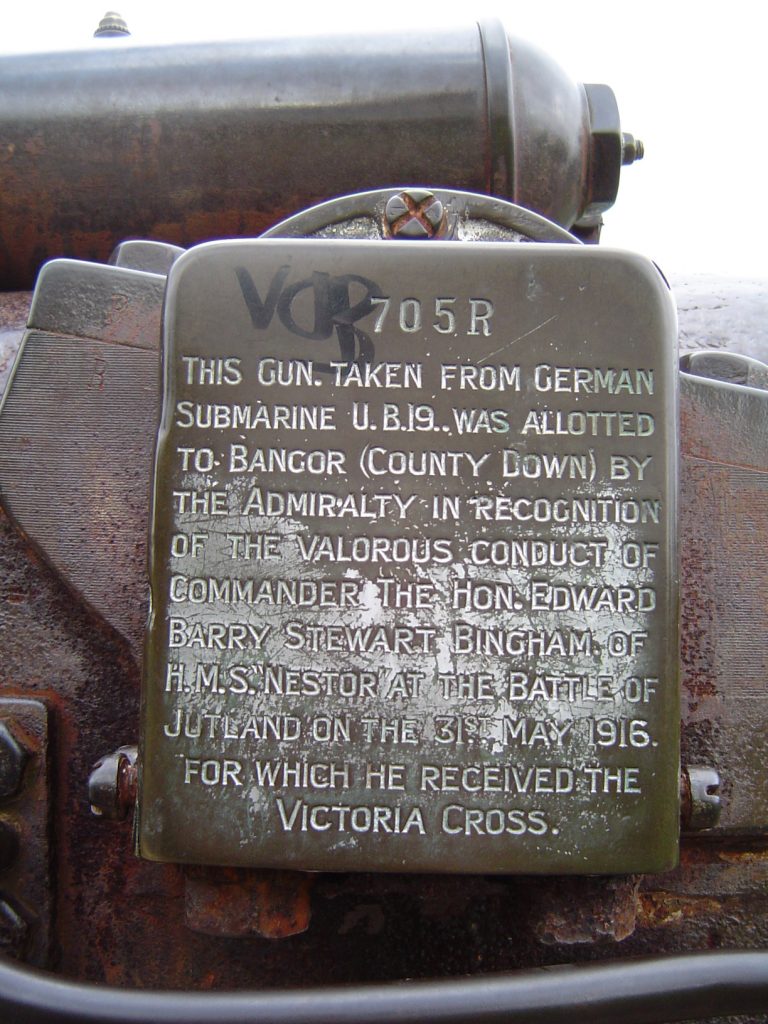 Performed by His Grace the Governor.

Ward Park, Bangor, was the scene of a very impressive ceremony yesterday, when His grace the Governor of Northern Ireland unveiled a memorial to the 124 sailors, soldiers, and airmen belonging to the town and district who made the supreme sacrifice in the Great War.

The memorial, which occupies a commanding position in the park and is constructed of Portland stone, is 40 feet in height and 36 feet square at the base. On the north side is a life sized bronze figure representing Erin, holding a palm branch, symbolical of victory, while nearer the top of the column is a figure representing the Lion of Victory. Midway are engraved the words “Died in the service of their country.” On the bottom panel is inscribed: “The Great War, 1914-1918. To the memory of our fallen sons.” On the south side is a bronze shield, surmounted by laurel and oak leaves, on which are inscribed the names of the fallen, and on a lower panel is the quotation: “Dulce et decorum est Pro Patria Mori.” The top of the column is surmounted by runic interlacing, and all the embellishments are of’ bronze.

On arriving at the principal gate leading into the park, his Grace, who was attended by Lieut.-Commander Oscar Henderson, C.B.E., D.S.O., R.N., private secretary and Captain Martelli, A.D.C., was received by Mr. Robert Fegan, J.P., Chairman of the War Memorial Committee, who were accompanied by the Town Clerk, Mr, J. Milliken.

In the park the Governor was received with the Royal Salute, the band playing the National Anthem.

His Grace inspected the guard of honour of the 1st Battalion the West Yorkshire Regiment (under the command of Captain S. H. D. Chamier, (M C.) which, with the King’s Colour, was drawn up on the main avenue He then proceeded to the marquee, where the members of the Urban Council were presented by the chairman, the Governor receiving each with a hearty handshake An address of welcome was afterwards presented to his Grace by the Council, the text being read by the Town Clerk. The address was in the following terms;-

To His Grace the Duke of Abercorn, KP.,

May it please Your Grace.

We, the Urban District Council of Bangor, in the County of Down, on behalf of the people of Bangor, beg to extend to Your Grace a warm and hearty welcome on this your first visit as Governor to our town, and to assure you of our continued loyalty to yourself and to his Majesty the King, whom you represent with so much distinction.

On the occasion of your appointment to your exalted office we expressed the hope that you and the Duchess of Abercorn, during your tenure of Governorship, might see a steady advance in the peacefulness and the prosperity of the Province. We rejoice in the knowledge that hitherto there has been no interruption in the fulfilment of this hope, and we are happy in the confident anticipation of its continued realisation in the years to come.

We pray that Your Grace may long be spared to direct the destinies of a loyal and contented population.

Signed of behalf of the Bangor Urban District Council

In reply, his Grace said,;-It is exceedingly pleasant to me to receive this very warm welcome upon my first official visit to the prosperous and progressive town of Bangor, and I re-echo with fervour the expressions of hope contained in your address that peace and happiness may continue throughout our be­loved Empire The occasion which calls us together is not one for great rejoicing, but rather for deep and reverent thought in the memory in those brave men-and may I in­clude women-who made the supreme sacrifice during the Great War. May I be permitted to express the hope that in showing honour to your dead by your memorial in stone you will at all times remember and care for the living in your midst, especially those who find them­selves incapacitated as a result of their services, and that it will be your earnest endeavour to make Bangor a model town in Northern Ireland. I trust that, as a result of your labours, Bangor will be filled during the coming summer by an influx of visitors from all parts of the world, who will, I feel assured, derive great pleasure and enjoyment by their stay in your midst. Gentlemen and people of Bangor, I thank you.

The Governor and party, with the members of the Urban Council, then proceeded to the memorial which was surrounded by several thousands of people including a large number of Boy Scouts and Girl Guides. The relatives of the fallen were provided with reserved seats in front, and behind them were drawn up about two hundred local ex-service men, in charge of Captain H. W. M’Mullan, with Captain W.H. Keenan as adjutant. Among   those present were the marquis of Dufferin and Ava, Sir Thomas Wilson, J.P., and Mr. T.W. M’Mullan, M.P.

The service, at which Mr. M’Millan presided, commenced with the signing of the hymn, “Oh God, our Help in ages past.” The Rev. E.B. Cullen, President of the Methodist Church in Ireland, having read psalm 46, prayer was offered by the Very Rev. Thomas Haslett, M.A., D.D.

The Chairman said they were gathered there on a momentous occasion-one that would stand out prominently in the history of Bangor-when the memorial, which had been erected by the townspeople, to perpetuate the memory of those who went from among them and yielded up their lives in the defence of their country during the Great War,  was about to be unveiled by his Grace the Governor of Northern Ireland as the representative of his most gracious Majesty the King. The ceremony was a solemn one, and it was not appropriate for speechmaking, but, as chairman of the committee in charge, he might be permitted to say a few words. He would first express the regret of the committee at the delay that had taken place in the completion of the memorial.      That arose from a variety of circumstances over which they   had   no   control. He    thought they would agree however, that the site selected was suitable and appropriate, and that the finished work reflected on the designer, Mr. T. Eyre Macklin, and the contractors, Messrs. Purdy and Millard, as well as on the committee.  From the outbreak of the war, the response to the call for recruits from Bangor town and district was a generous one. Their young men went forth in large numbers, without hesitation, to fight for their King against the foe that threatened their native land. He would not detain them to relate the history of the heroism of the Ulster Division in France, or of the valorous achievements of their townsmen who served there or in other areas of war, on land, or on sea, or in the air. They did their duty nobly. They saved their country and preserved the freedom of their Motherland and of the world.     Alas! Many of them made the supreme sacrifice, dying that they might live as a free people.    It was to commemorate the men of their town and district who fell that that column had been erected, to preserve to those who remained behind, and to those who came after a record of their bravery and their devotion, and to be an incentive to future generations, should the nation again be in peril. Their memory must never be allowed to fade, and they who remained must strive to prove themselves worthy of their great sacrifice. The committee were indebted to his Grace for the readiness with which be assented to their request that he should perform the ceremony that day. They welcomed him to Bangor as the reprehensive, of their Gracious King, and they also welcomed him in his personal capacity as a leading nobleman of their Province, who had carried out the duties of his high position with dignity and to the cordial satisfaction of all the people of Northern Ireland.

The Governor having performed the unveiling ceremony, the names of the fallen were read by the Town Clerk.

Amidst a most impressive silence, the memorial was dedicated by the Lord Bishop of Down and Connor and Dromore (the Rt, Rev. Charles T P Grierson, D.D.). The Archdeacon of Down was in attendance as chaplain to the Bishop.

The sounding of “The Last Post” was fol­lowed by the singing of the hymn, “God of Our Fathers, Known of Old.”

Mr. M’Millan having asked Mr. Fegan, as chairman of the Urban Council, to accept custody of the memorial, Mr. Fegan, in reply, said he had the honour t accent it, to protect and preserve it for all time, in memory of the gallant men who had died for their country.

Captain Bennett, of the Salvation Army, pro­nounced the Benediction which was followed by the sounding of Reveille.

Wreaths were placed by the Governor, the Bangor Urban Council; the General Officer Com­manding the Northern Ireland District, the Officer Commanding No. 502 (Ulster) Bombing Squadron, Royal Air Force; the local ex-Servicemen, and, relative of the fallen.

The members of the Executive Committee of the War Memorial Committee, Mr. T. Eyre Macklin, the designer of the memorial, and Mr. F.H. Purdy, of Messrs. Purdy & Millard, the contractors, were then presented to the Governor.

His Grace, having inspected the ex-Servicemen, Boy Scouts and Girl Guides, the singing of the national Anthem brought the solemn proceedings to a close.

The signing throughout the service was led by a massed choir, drawn from the local churches and musical organisations, conducted by Mr. Joseph Douglas. The work in connection with the memorial which was carried out to the satisfaction of all concerned, was in the hands of Messrs. Purdy & Millard, sculptors, 21, College Square North, and 76, Hamill Street, Belfast.