This page contains one image, names of the FALLEN and information regarding the memorial. 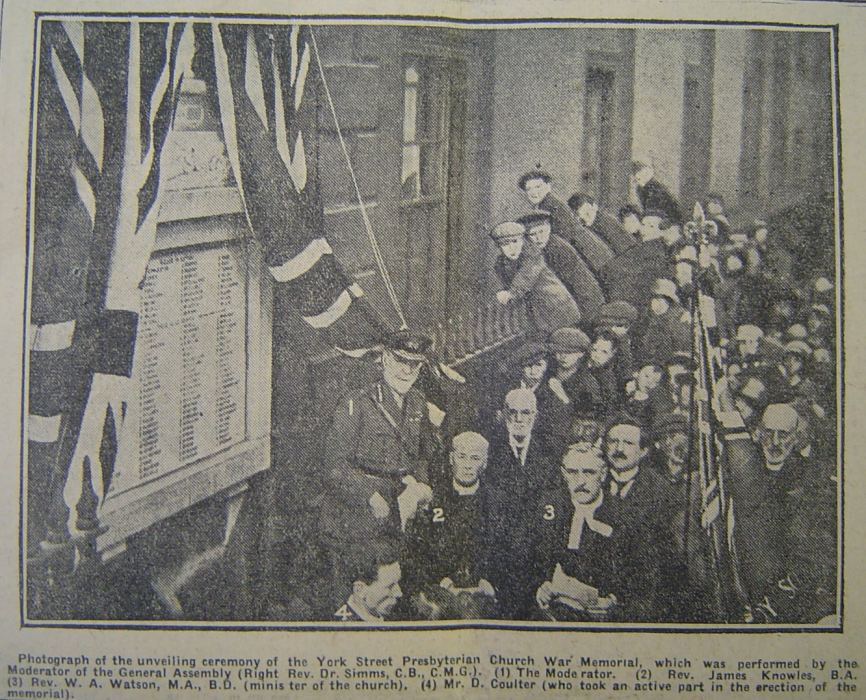 Newspaper photograph of the unveiling of Earl Street War Memorial, north Belfast, May 1920

The Earl Street War Memorial, was attached to the side wall of York Street Presbyterian Church Belfast. It consisted of a tablet of white Portland stone, with marble centre, on which were engraved the names of 132 men, of whom 36 were killed. On a panel over the names inscribed in bold relief was a bayonet and strap, with a spray of laurel entwined. This was surmounted by a sculptured Imperial Crown.

The members of 33rd Company Boy Scouts (Belfast) were chiefly responsible for organizing and collecting funds for the erection of this memorial. The names of the Committee of Erection were listed on the tablet.

During the ‘Belfast Blitz’ [1941] in the Second World War this area of the city suffered severe damage and the church was destroyed. I would appreciate a photograph of the memorial to display on this page. The Regiment/Unit in which the person served will follow later.

The inscription records that the tablet has been: –

Erected by the Residents of Earl Street and District, in honour of their boys who fought and died for King and Country in the Great War.