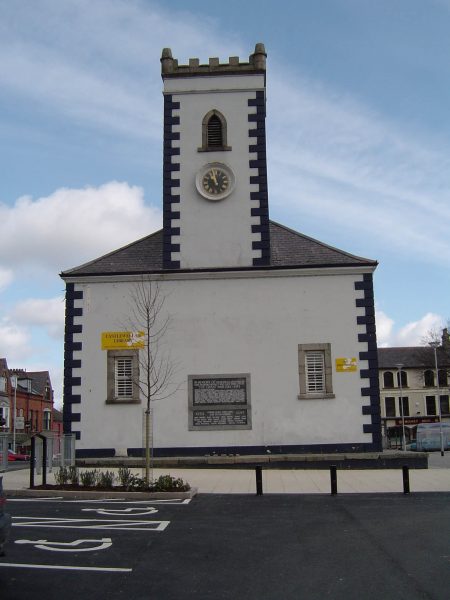 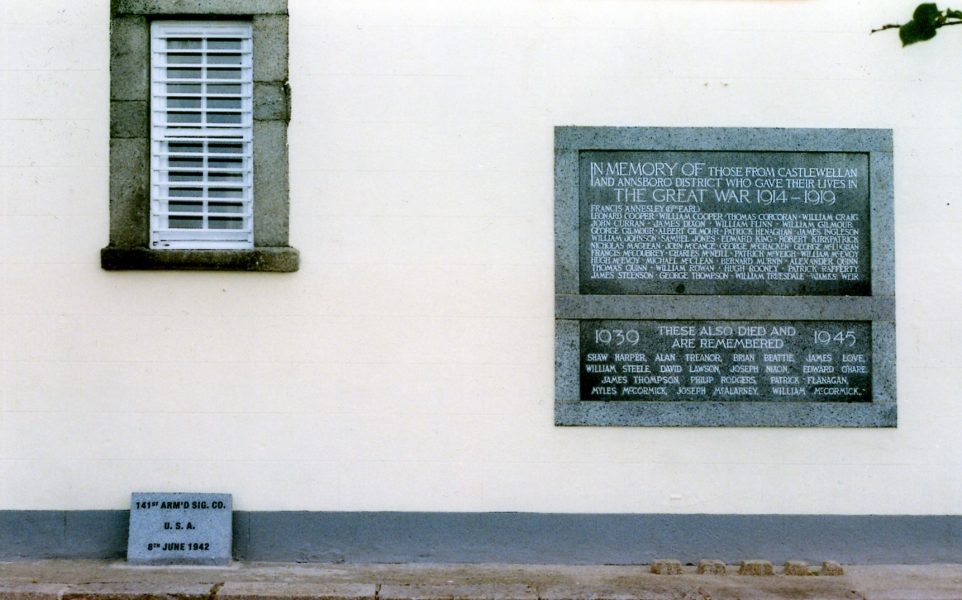 IN MEMORY OF THOSE FROM CASTLEWELLAN AND ANNSBORO DISTRICT WHO GAVE THEIR LIVES IN THE GREAT WAR 1914 – 1919.

Castlewellan War Memorial Tablet is located on the A25 in the centre of the village. The tablet is fixed to the south wall of the Old Courthouse beside a car park. It has been impossible to determine a precise date when it was dedicated/unveiled. In 1919 at a public meeting in the Courthouse steps were taken to perpetuate in some tangible form the memory of the local men of His Majesty’s forces who fell in the war.

The following year arrangements were made for the lettering of the granite slab, which was to be placed on the wall of the Courthouse.

In the early part of the 20th century the owners of the local granite quarries presented the then Lord Annesley with a table which had a large granite top. This was to show their appreciation for the large volume of trade received from London due to his efforts to promote the business there. One of the stories relating to the Castlewellan War Memorial tablet is that Lord Annesley, following the loss of his son during the war, presented the War Memorial Committee with this table top to be used for the memorial tablet.

Wreaths were laid at it during the Second World War.

(Annsboro is a very small village about 1 mile north of Castlewellan.)

Below and to the left of the tablet is a much smaller memorial commemorating the 141st Armoured Signal Company U.S.A. who trained in the Castlewellan area prior to moving to Europe during the 2nd World War. It is dated 8th June 1942.

The flags of Britain and the United States hung side by side on a wall in the Square of Castlewellan on Sunday, 3rd April, 1949.

The occasion was the unveiling of two memorials-one in memory of 14 Castlewellan and Annsborough men who gave their lives in the 1939-45 war, and the other in memory of the stay, near Castlewellan, of the 141st United States Armed Signal Corps.

Banners of the British Legion fluttered in the strong breeze as, headed by the band of the Royal Ulster Rifles, members of the Legion from surrounding areas, youth and other organisations, marched through the town to the square, where the ceremony was held.

The parade was commanded by Major M. R. Bruce, Castlewellan.

The first memorial to be unveiled was the British one. Castlewellan’s postmaster, Mr S. Ryan, senior ex-Serviceman of the district, asked Major-General G. I. Gartlan, G.I., C.B.E., D.S.O., M.C., president of the Newcastle Branch of the Legion, to unveil it.

The Last Post and Reveille were sounded by buglers, and Major Bruce then read out the names of the 14 men, many of whose relatives attended the ceremony, and the “Memorial Recital.”

General Gartlan, in a short address, said memorials had been erected to many famous people throughout history. That memorial was not to famous persons. The names of these men had not been publicised all over the world. They were ordinary men who had an ordinary ambition-to live their lives in peace, and reside with their families. They had given their lives for others. Famous generals could not have done more. These men went forth and gave their lives, and he hoped that the memorial would be an inspiration to others who, should the occasion arise, would do likewise. The following wreaths were then laid:-the British Legion, Newcastle Branch; in proud and loving memory of Pilot Officer Alan L. Trainor, killed at Dunkirk; in loving memory of Shaw Harper, from his father, mother, brother and sister, and from Castlewellan Market Committee.

Mr. Ryan then asked Mr William A. Smale United States Consul in Northern Ireland to unveil the tablet to the American forces. The men, he said, had been a credit to the uniform and to the United States. He hoped that some day they would visit Castlewellan, and he could assure them of a hearty welcome.

Mr. Smale, unveiling the tablet, said that members of the United States Army remembered with pride and joy their stay in Ulster. It was his hope that someday they would return and pay a visit.

He felt he would be charged with flattery if he was to speak openly and frankly of the pride which every American had for Ulster, whose people so openly welcomed their troops during the war.

The lads of the 141st Armed Signal Corps, who had been stationed near Castlewellan, went through a “terrible tour” of duty. Few had lived to tell the tale.

It would be unfitting to dedicate the stone without dedicating themselves to the battle which they must face daily-the battle against tyranny.

Said Mr. Smale: “We must convince every potential aggressor against the democratic form of life that we are determined to have a complete and lasting peace, even if, so help us God, it will be necessary to fight again to gain it.”