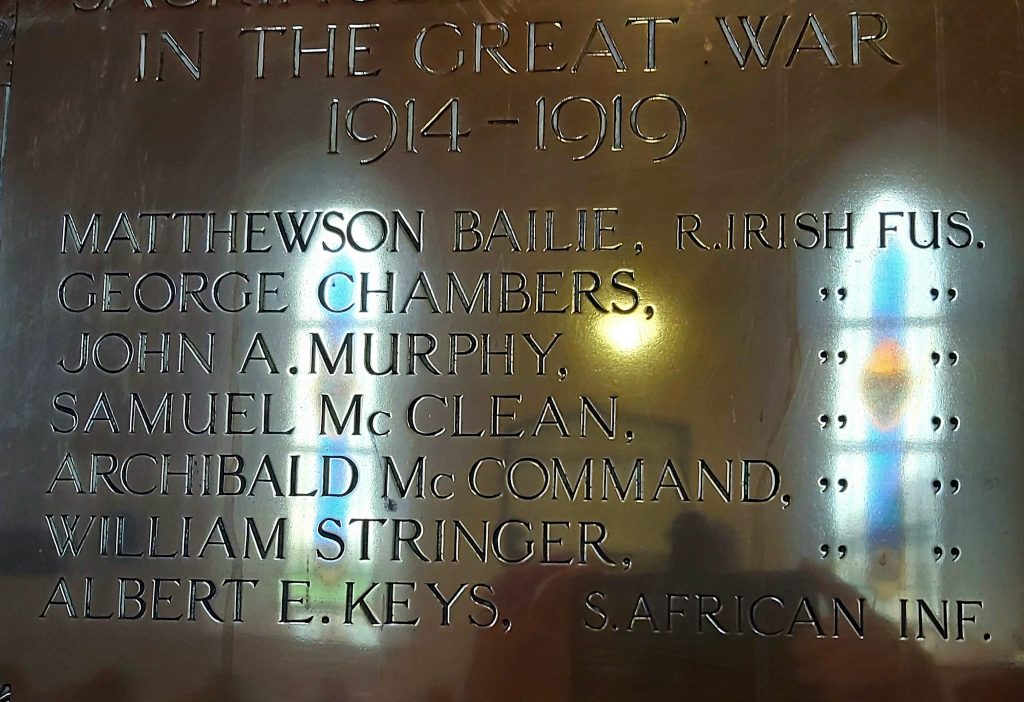 On Sunday, December 12 [1920], His Grace Lord Primate unveiled and dedicated the War Memorial Brass Tablet, and Roll of Honour recently erected by the parishioners.

There was a very large congregation present, and the service all through was most impressive. Morning Prayer was conducted by the Rector, Rev. H.A. Colvin, M.A. At the close of the Morning Prayer the unveiling and dedication ceremony was proceeded with. His Grace the Lord Primate proceeded by the Rector and churchwardens (Messrs. Charles Knipe and Robert Gwynne), moved in procession to the porch, where the Roll of Honour, containing the names of all parishioners who served in the war, was unveiled and dedicated. The procession then returned into the church, and took up position in front of the brass tablet containing the names of those who made the supreme sacrifice in the war. The ceremony of unveiling and dedication having been duly carried out by His Grace, special prayers were said, and the “Last Post” was then rendered by the buglers of the Milford Boy Scout Troop. They hymn “Ten thousand time ten thousand,” was then sung, after which His Grace preached a very appropriate sermon and paid a touching tribute to the memory of those who laid down their lives, and also to those who served and survived. After the singing of the hymn, “The Son of God goes forth to war,” the Benediction was pronounced. The service closed with the singing of the National Anthem.

Prior to the Dedication Service His Grace the Lord Primate held a special Confirmation service for candidates from the parish.