This page contains five images, the names of THE FALLEN 1939-1945 and a report on the first unveiling and dedication ceremony. 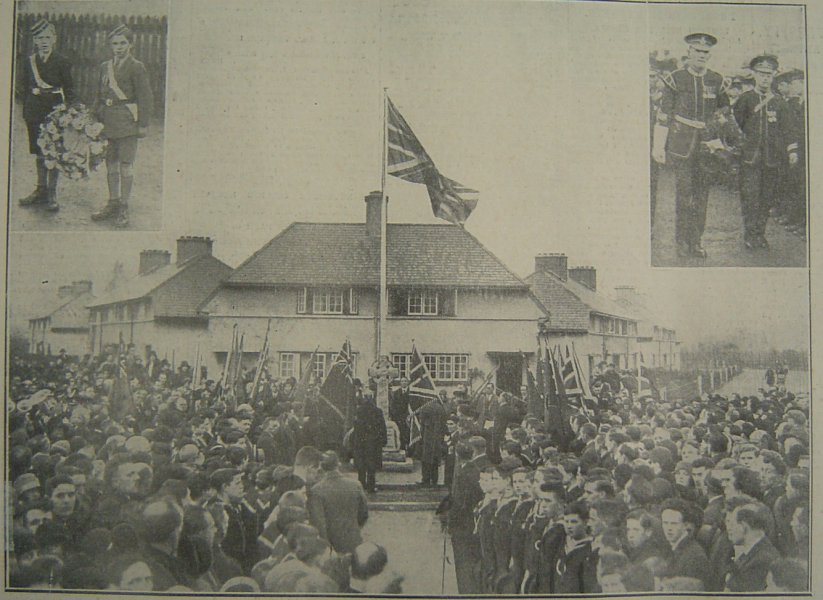 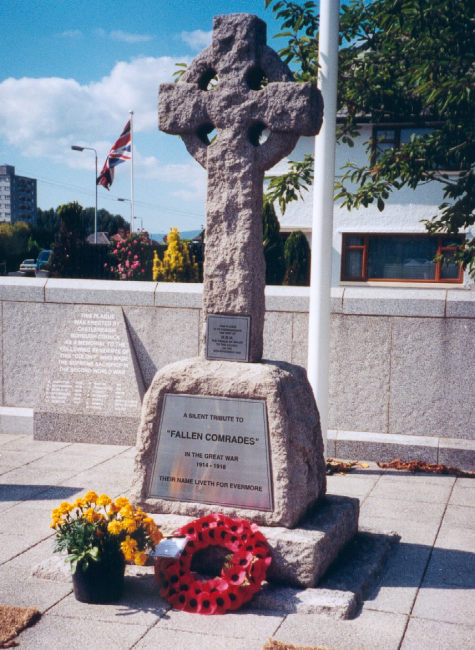 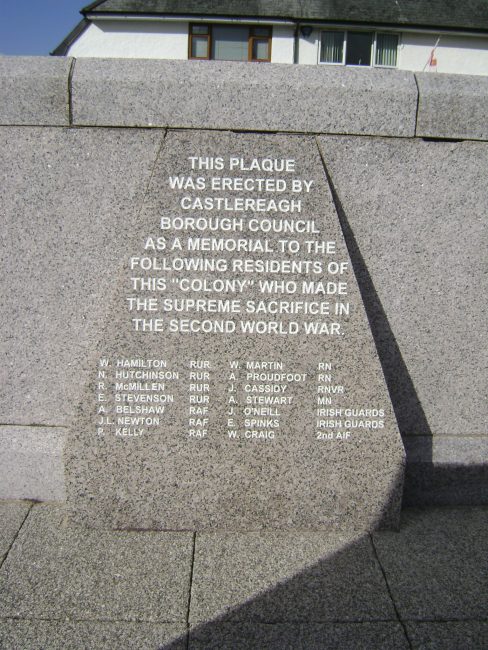 The “Colony” was the name given to a development by the Irish Soldiers and Sailors Land Trust in 1925 to provide homes for returning heroes (ex-servicemen) and their families.

There is a Great War memorial without names. This memorial was unveiled and dedicated twice. Report on second unveiling to follow.

At the ceremony were about 2,000 sympathetic spectators, many of them wearing medals.

All units taking part in the proceedings, assembled at a suitable point nearby and under the orders of Major C. Blakiston-Housion who had Mr.D. McCullough and Sergeant Dixon to assist him.  On parade were Sea Scouts, Boys’ Brigade boys, Girl Guides and detachments of ex-Servicemen. They were inspected by the Marquis of Dufferin and Ava and after the in­spection, headed by two bands, they marched to Thiepval Avenue and formed up at the war memorial.

The ceremony was of the conventional type and included a short religious service in which Rev. J. Howe. Rev. C. W. A. Houston, M.A., and Rev. D. Stewart took part. The “two minutes silence,” preceded and followed by the “Last Post” and the “Reveille” was observed. Afterwards there was the laying on of wreaths.

Rt. Hon. J. M. Andrews performed the cere­mony of unveiling, and in a voice which could be heard far and wide pronounced the appropriate words: ‘”To the sacred memory of those men of Cregagh and district who made the supreme sacrifice.” Lord Dufferin laid the first wreath in position.

Captain the Right Hon. Herbert Dixon, D.L., M.P., who presided, thanked Lord Dufferin for his interest and his presence there. “ The Marquis,” he said, has an    unfailing interest in ex-Servicemen and tries to help them in every   way he can.” Of any part of Ulster which deserves to have a memorial, be continued, there was no part which sent more men to the front and none more worthy to have such a memorial than Cregagh district.  “ They very men of Ulster,” be pointed out, “who went to the front were the men who collected to defend Ulster when they thought there was a    grievance against the Mother Country.  But when the Mother Country was in need of them they fought and died for her. This memorial will be remembered for the men who died as well as for the men who lived to serve after the war when Ulster was in diffi­culty.”  Captain Dixon concluded with a special word of thanks to Mr. McCullough, who organised the ceremony

THE FOLLOWING RESIDENTS OF THIS “COLONY” WHO MADE THE SUPREME SACRIFICE IN THE SECOND WORLD WAR.

The following information is courtesy of Philip Doms, [centre in image below] one of a small group of people who raised a monument to the dead crew near the crash site.

‘Charles Philip Kelly, from 6 Somme Drive, Belfast, was a Flight Engineer with the Royal Air Force Volunteer Reserve. The Lancaster bomber in which he was flying was shot down over Belgium on the night of 25/04/1944. There were no survivors.

On the 50th anniversary of the crash a memorial was erected in the local village to the crew.

During the clearing of some trees pieces of aluminium appeared. The owner and also developer of the site, granted permission for further investigations.

Since then, other parts including an engine have been found.

‘The proposed plans are to excavate further and to make from the found pieces a symbol for the fallen. It will be placed at a special place at the site, a place for remembrance and reflection nearby the crash site. The new buildings and the two new streets on the building site will be named after the crew members.’

The memorial is located on the border of Sint-Katelijne-Waver and Mechelen. The event will take place on 25th April 2014, 70 years on from the day the crew lost their lives 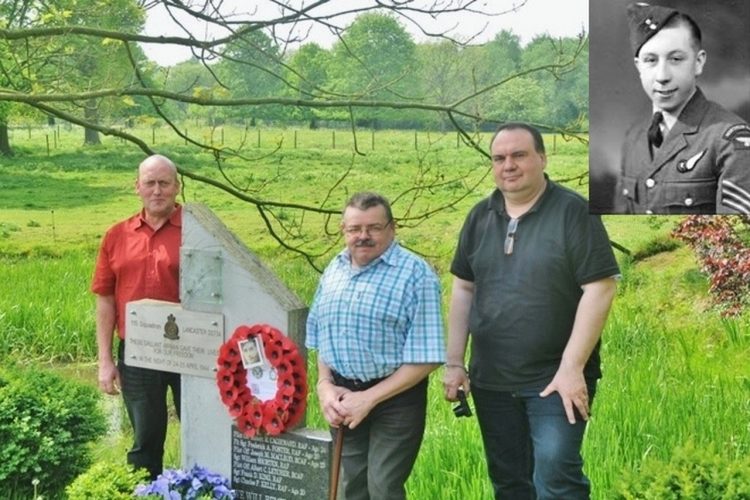 Philip Doms, one of the small group who organized and undertook the erection of the memorial, is in the centre of the image. Charles Kelly’s image is top right.

The surrounding area has strong local links to war veterans of both the First and Second World Wars. Many of the nearby homes housed ex-servicemen and World War veterans. Street names such as Picardly Avenue and Hamel Drive are named after World War 1 battles and road names search Alanbrooke Road and Montgomery Road are named in honour of World War Two field marshals.

This sign is located in the green area on Alexander Road, opposite the entrance to Castlereagh Police Station. 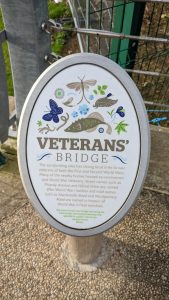 The text on this page has been created from newspaper archive content and it may contain typographical errors. If you can supply additional information, photographs of War Memorials in the nine counties of Ulster, or wish to report errors, broken links, make comments, suggestions, requests, etc. please email
uwms@outlook.com
All contributions will be acknowledged.