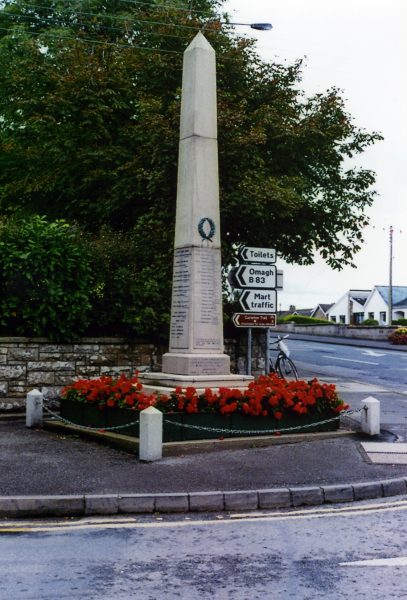 In the presence of a large company the Clogher memorial, erected to perpetuate the memory of some thirty-six men from the town and district who paid the supreme sacrifice in the Great War, was unveiled.

The memorial takes the form of a beautiful column, of Irish granite standing 16ft. high on a base of three steps and tapered at the top. It is situated on the eastern end of the town, at the junction of the Omagh and Aughnacloy roads. The ground was granted by the Clogher Diocesan Board of Education.

Amongst the public attending the ceremony were a large number of relatives of the de­ceased, while 100 “A” and “B” Specials were in charge of Captain King and Captain Martelli, as well as a detachment of the Royal Inniskilling Fusiliers, under Major Alexander, M.C., and Lieut. M’Connell, from Omagh.

Brigadier-General Ricardo, after the cere­mony, said he had soldiered with men from the Clogher Valley and from Clogher at various times in different parts of the world for the past thirty years, and they had seen some rough times together. His experience of Clogher men had, been of the happiest, as they had invariably proved themselves to be gallant soldiers and true comrades. He could truly say to their relations and friends that they did well to honour the men by erecting that memorial. In these days of strife and unrest such a memorial suggested thoughts of what an awful scourge war was. Instead of settling international differences war was utterly futile, and a wicked waste.

The same was equally true of their differ­ences in Ireland. Had they not seen for some time preparations going on for a trial of strength in battle between the North and South? Was that he asked, going to settle anything? If the late war left nothing but sorrow and ruin in its train, what would this island be like at the end of a civil and religious war? Combatants in a civil war have after­wards to settle down and live together again. Apart from the material ruin which it would take generations to repair, they had to think of the ghastly legacy of hate left behind, and would life in the country then be worth living? He did not think so. They made too much of the differences in Ireland. In education, in recreation, and to a great extent in their every­day life they were split into camps, and as a consequence hatred and mistrust were ram­pant.

THE ROLL OF HONOUR.

Major W. Stewart then read the following list of inscriptions and names on the tablet: “In memory of the men of this district whose names are here inscribed who died in the great war, 1914-1918. Erected by their fellow-countrymen and women. Greater love hath no man than this: that a man should lay down his life for his friends.”

“The Last Post” was sounded by a military bugler, after which Major Stewart proposed a hearty vote of thanks to Brigadier-General Ricardo, and presented him on behalf of ex-Q.M.S. Hamilton and local com­rades of the Inniskillings with a little Union Jack, which was the first flag placed on Messinces Ridge following the big fight in that centre, as a memento of the occasion.

Following the ceremony relatives placed wreaths and floral tributes to the memory of their loved ones on the base of the column.