This page contains one image, the names of the FALLEN and those who served and returned, plus  a report on the unveiling and dedication ceremony. 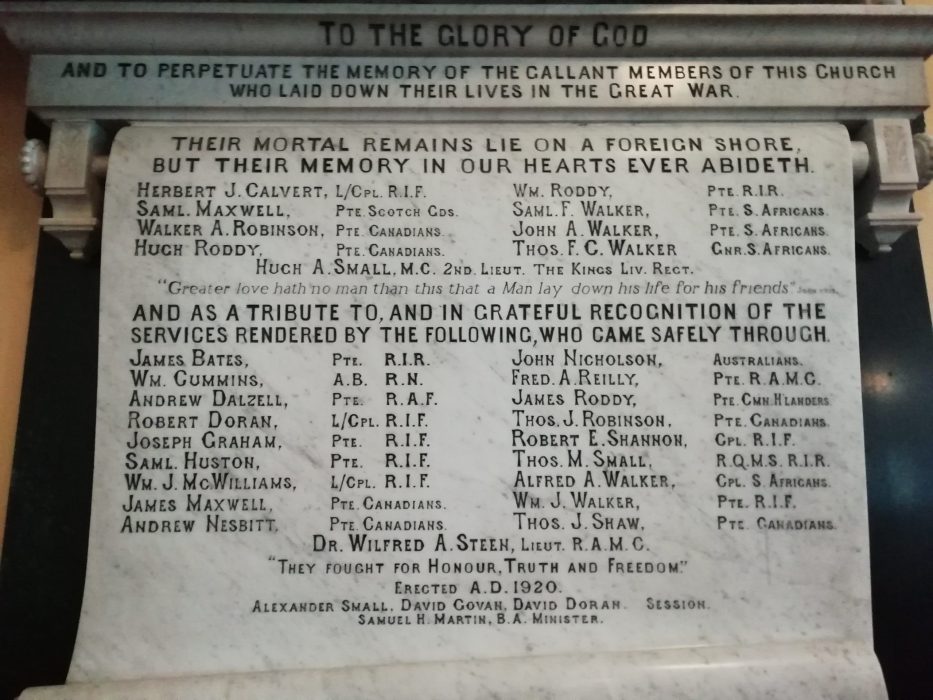 The congregation of Second Keady Presbyterian Church has a splendid war record and on Sunday morning last a most impressive and solemn service was held at which there took place the unveiling of a beautiful war memorial to the brave lads of the congregation who made the supreme sacrifice as well as to those who came safely through.

There was a large congregation, every seat in the commodious building being occupied. It was regrettable that the pastor, Rev. S. H. Martin, B.A., was unable to be present through illness.

Appropriate hymns were sung and the special preacher was the Rev. W. Currie, B.A., Bangor, who took as his text the words, “Remembering without ceasing your work of faith, and labour of love, and patience of hope in our Lord Jesus Christ, in the sight of God and our Father.”. (1st Thessalonians, 1st chapter, 3rd verse.) The rev. gentleman delivered a most impressive address in the course of which he referred to the sacrifice made by the youth and manhood of the Empire.

At the conclusion of a solemn and touching sermon the preacher announced that Mrs. Joseph Walker, would unveil the memorial.

Mrs. Walker, whose five sons served in the great war, three of them making the supreme sacrifice, said, in unveiling the tablet-This memorial is erected in memory of the gallant boys of this congregation who responded to the call of duty and fought for the cause of truth and justice.  “Greater love hath no man than this, that he lay down his life for his friends.” They are not dead but gone before. If we still love those whom we lost, can altogether ????? those whom we love? Thank God we cannot. When they who went out with such high hopes perished in the trenches or were buried in unknown graves it is a mistake to say they never return. They really never left. Their bright spirits tenant the hearts of those who love them. They remain with us as on the day when he bade them good-bye ????? the pride and glory of their manhood. In all life laid down at the call of duty there is something imperishable became sacrificial. Their spirits are in God’s safe keeping. Concluding Mrs. Walker said-I greatly appreciate this solemn honour conferred upon me to unveil this memorial tablet to the honour of our noble living and gallant dead who fought for right against might.

At the conclusion of the unveiling ceremony the Dead March in “Saul” was played on the organ by Mrs. G. Anderson, who also conducted the special music, after which the “Last Post” was sounded by the buglers Messrs. R, and W. Irwin, Armagh, and the solemn proceedings concluded by the announcing of the Benediction.

The memorial tablet, which is a piece of work of art, and which was draped with Union Jacks, bears the following inscription: -Second Keady Presbyterian Church. To the glory of God and to perpetuate the memory of the gallant members of the Church who laid down their lives in the great war. Their mortal remains lie on a foreign shore but their memory in our hearts ever abideth; – Herbert J. Calvert, Lance-Corporal, Royal Irish Fusiliers; Samuel Maxwell, Scots Guards; Walter Robinson, Canadians; Hugh Roddy, Canadians; William Roddy, Royal Irish Rifles; S. F. Walker, South Africans; John Walker, South Africans; Thomas C. Walker, South Africans; Hugh A. Small, M.C., Second-Lieutenant King’s Liverpool Regiment.

“Greater love hath no man than this that a man lay down his life for his friends.”

And as a tribute to, and in Grateful recognition of the services rendered by the following, who came safely through: –