This page contains three images, the names of THE FALLEN and a report on the unveiling and dedication ceremony. Additional images available on request to uwms@outlook.com 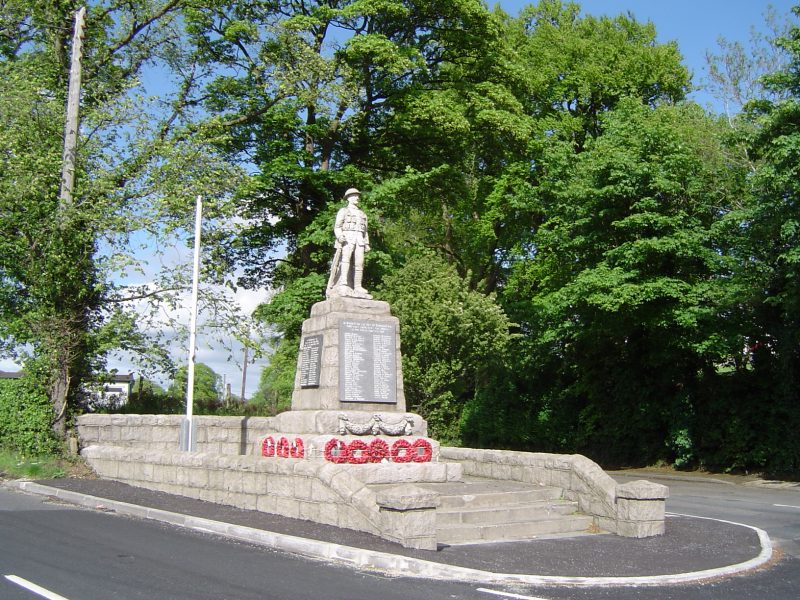 In Honour of the Men of Downpatrick who gave their Lives for Others in the Great War, 1914-1918:

The Downpatrick War Memorial is located at the junction of the Belfast and Strangford Roads adjoining the Downpatrick cricket field.  It is 20 feet (6.75m) high, and was designed and executed by Messrs S. and T. Hastings a local firm. Three broad steps lead to a roomy landing, on which the monument is erected. The massive pedestal and enclosing low walls are of Irish granite with a rock-faced finish. Immediately underneath the inscription panel, carved in relief, are festooned sprays of laurel, symbolising victory. On the pedestal stands the figure of a Rifleman, of heroic size, sculptured in Portland stone by Mr T. Hastings. [The end of the rifle barrel is missing]

The site for the memorial was presented by Lord Dunleath, proprietor of Downpatrick and the Demesne of Down.

The memorial was unveiled by Lord Bangor and the Rev. R. M’Elney read the names of the fallen and offered a Prayer of Dedication.

Here where they lived and played,

Where boyhood years were spent,

Where oft their careless footsteps strayed,

We raise this monument.

Ours were they in their youth;

Ours in their memory yet.

They died for freedom, honour, truth,

And we shall not forget.

When all are dead and dust

Who mourn them still with pride,

This graven stone will hold in trust

The fame of those who died.

Think not they fell in vain ;

Their seed of sacrifice

Has borne, and yet shall bear again

Symbol of hope that can redeem

Under a blue sky, the air crisp and invigorating, on Thursday evening Lord Bangor, in the presence of a great concourse of people, unveiled the monu­ment, inscribed as above, occupying in a sylvan setting a commanding position adjoining the Downpatrick cricket field at the angle of the Belfast and Strangford roads. It is 20ft. high, and was de­signed and executed by Messrs S. and T. Hastings. Three broad steps lead to a roomy landing, on which the monument is erected. The massive pedestal and enclosing low walls are of Irish granite, rock-faced. Immediately underneath the inscrip­tion panel, carved in relief, are festooned sprays of laurel, symbolising victory. On the pedestal stands the figure of a Rifleman, of heroic size, ad­mirably sculptured in Portland stone by Mr T. Hastings himself, an artist who since the war has done much fine work of this kind. The figure is impressive in every detail, as well as in poise and outlook. Altogether the monument in its strength and simplicity appeals to the imagination. It speaks to the living, as it will speak to the genera­tions to come, of great historic hours and of men’s virtues and sacrifices.

The arrangements for Thursday’s ceremony were carried out by a committee, of whom Col. Wallace, C.B., is chairman, and Mr W. A. Martin, secretary, and the committee were ably assisted by Mr A. J. H. Coulter. A column of ex-servicemen, headed by Major Pilson, D.S.O., and then a constabulary guard of honour, under the command of County-Inspector M’Nally, with whom were District-Inspector Dudgeon and Major Ker, county com­mandant of special constabulary, marched from English Street, to the music of the band of the Sherwood Foresters from Ballykinlar. Separate positions were assigned to relatives of the dead, the Urban Council, and Girl Guides under the charge of Mrs Pooler. Military buglers were posted on the steps of the monument. Colonel Wallace pre­sided, and among others present were Colonel Sharman-Crawford, D.L., and Colonel Perceval-Maxwell, D.S.O. The proceedings were opened with prayer by Rev. F. T. Parker.

The Chairman spoke of the monument as a slight tribute of gratitude and lasting remembrance. It was not for him or any one to praise the men, to extol their deeds, their valour, their love, their patriotism. That would be to try to gild the finest gold.   In the words of our Master,

‘Greater love hath no man than this, that a man lay down his life for his friends.’

Hearty thanks were due to Lord Dunleath, pro­prietor of Downpatrick and the Demesne of Down, for presenting the site for the memorial; to the C.O. and officers of the 1st Battalion Sherwood Foresters for sending the band and buglers; and last, but not least, to Lord Bangor for coming to take the chief part in the ceremony that evening. It only remained for him now formally to hand over the memorial to the trustees representing the people, to care for and guard in future days.

The Dean of Down said that the memorial was placed in a prominent situation that the men who fell in the war might be constantly in remembrance, and that all might see we had not forgotten them, but would for ever remember them with pride. Let us ask ourselves (he continued), What does this memorial stand for? What is its message to those who pass by? With what voice does it speak? It tells us at least one great and abiding fact, that there are things that brave men hold dearer than life itself-such things as religion, liberty, country, and home. When in the early days of August 1914, these things were threatened, and the call came to defend them, men were found in abund­ance who responded to the call, and were not afraid to face death that these things might be secure for the world. A Greek poet wrote the epitaph of the men who fell at Thermopylae .-

Obedient to their command, we lie.

That is the message which this memorial carries to us. They do not indeed lie in this place ; their bodies are buried in foreign lands. But we have raised this dignified memorial here that it may remind us of how these men, whose names are inscribed upon it, died that we might life. There are hearts here to-day that still are lonely, and to them this memorial has a more intimate message. But their grief is relieved by the assurance that we are one with them in sorrow, and one with them in pride. These men who died will never be forgotten. We in Downpatrick dedicate this memorial, be­cause when men rallied from every portion of the Empire at the call of King and country our town did not lag behind, but sent its share of men to do their part, as it had always done before when freedom was threatened. And as we remember them, and look at this memorial, our feelings find expression in the words of England’s great poet:

Nothing is here for tears, nothing to wail

Or knock the breast; no weakness, no contempt,

Dispraise, or blame; nothing but well and fair

And what may quiet us in a death so noble.

Lord Bangor, drawing aside the draping Union Jack, said that this fine and impressive monument, facing the county town, stood for everything that was noble, brave and true.  It would be an incentive to this, and future generations, should occasion ever arise, to emulate the deeds of those whose names were indelibly engraved on the panel-names that would live when all now present had passed away. As an old soldier, he esteemed it a great privilege to unveil the memorial, to the glory of God, and in grateful and loving memory of those gallant men of Downpatrick and Demesne of Down who laid down their lives for their King and country in the great war.

Rev. R. M’Elney read the names of the fallen:

Though you have left us-yet your glory stands,

And he offered a prayer of dedication.

May this monument be preserved untarnished by those to whose care it is entrusted ; and may all who behold it now, or in days to come, be stimulated to live a truer and braver life. Comfort the sorrowing, and where affliction has abounded let consolation much more abound. Draw near, we beseech Thee, O God, to those who served and who have been spared to return. May the recollection of Thy goodness and mercy be health and inspiration to them unto life’s end. Smooth their way, and supply all their need. Let Thy blessing come down upon us all. May we under the influence of Thy spirit continually seek and daily strive after that holiness without which no one can see Thee as Thou art. Suffer us not in these swiftly vanishing days to be led astray by too eager desires for things that perish in the using. May we lay hold on the things that endure-the realities of faith, hope, and love. May we fervently desire things pure and true and good, and fervently, hate everything that is unworthy and unlovely. Forgive all our sins. Impart to us such knowledge of Jesus Christ, and such full assurance of faith that we may serve Thee without fear all our days.

The buglers having sounded the ‘Last Post,’ there was an interval of silence. Then came the ‘Reveille,’ and the salute. In homage, wreaths were laid at the base of the monument by relatives and the British Legion and other ex-servicemen, the War Memorial Committee, the Constabulary, the Urban Council, the Asylum, Downpatrick Orangemen and Women, and the Girl Guides.

After the benediction by the Dean, the National Anthem was played. 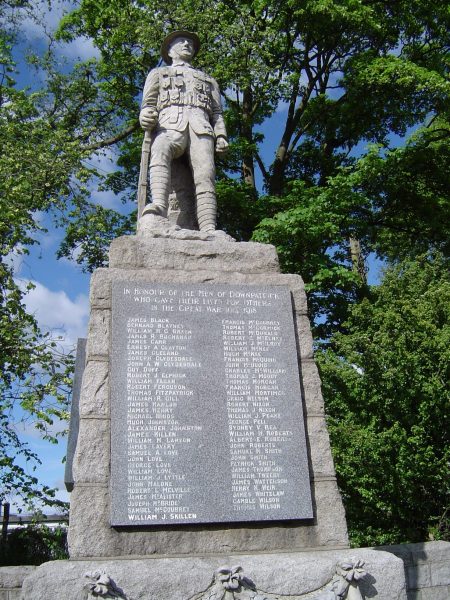 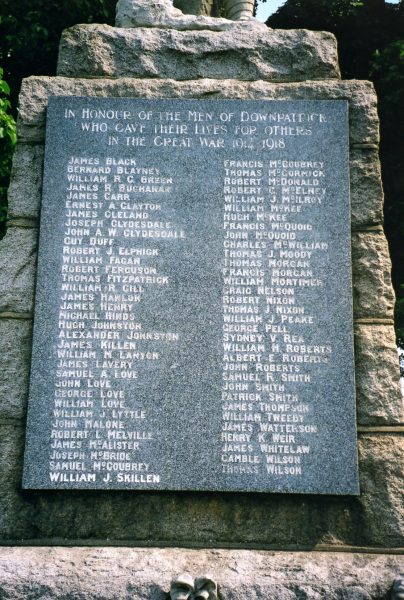