This page contains two images, the names of THE FALLEN, a description of the memorial and a report on the unveiling and dedication. 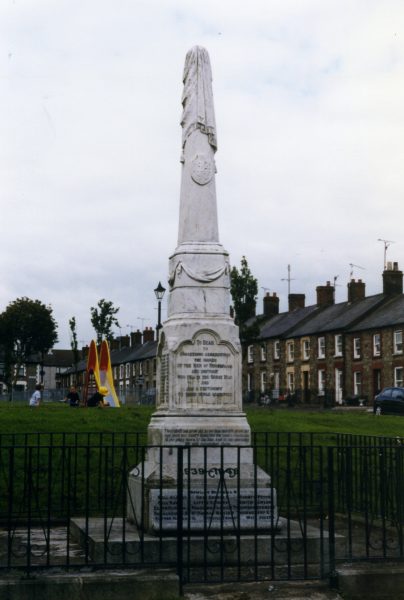 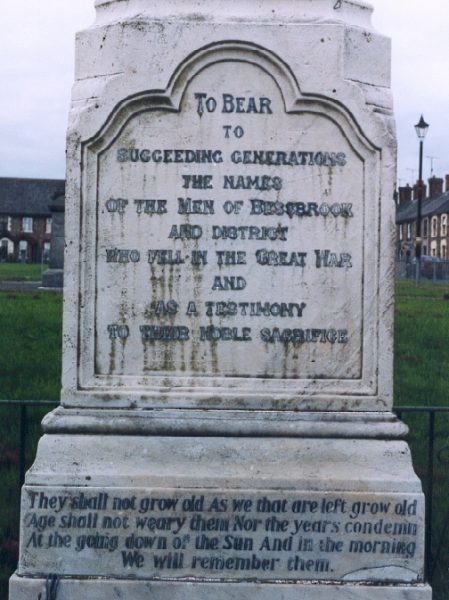 THE NAMES OF THE FALLEN

BESSBROOK'S TRIBUTE TO THE FALLEN.

Supreme Sacrifice Made by 86 Sons of the Village.

A Worthy Token of Love and Remembrance

Bessbrook on Saturday paid a fitting tribute to 86 sons of the village who made the supreme sacrifice in the Great War, when the memorial erected by the inhabitants was unveiled by the Rt. Hon. the Earl of Kilmorey, D.L. President of the Newry Branch of the British Legion.

The memorial, which takes the form of an obelisk, is wrought in white marble and Newry granite, and occupies a central site in the Village within sound of the hum of busy machinery with which so many of them were familiar and that hummed away for long, long hours in the production of war material when they were in the trenches. The monument, which is of pleasing proportions is broad-based on a projecting plinthing and rises to an elevation of over17ft. The massive base, checked and chamfered, with patent axed finish supports a richly moulded base and deeply panelled die with the top octagonal and four sides enhanced with graceful swags of carving. Surmounting the die is a beautifully draped spire with central shield bearing in relief the dates 1914-18. The recessed front panel of the die has the following inscription: –

To Bear to Succeeding Generations the Names of the Men of Bessbrook and District who Fell in the Great War, and as a Testimony to their Noble Sacrifice.

“They shall grow not old as we that are left grow old:

Age shall not weary them, nor the years condemn.

At the going down of the sun and in the morning

We will remember them.”

The ex-servicemen of Bessbrook and Newry branches of the British Legion fell in at the Town Hall, Bessbrook, at 2.30 for inspection by the Right Hon. the Earl of Kilmorey. The Bessbrook contingent was under the command of Capt. T. Grundle and that from Newry under ex-Lieut. W. B. Locke. The Women’s Section of the Newry Branch of the British Legion, (with standard), was also on the parade, as well as 1st Bessbrook Company Girl Guides (Miss Brown, Capt.) Brownies (Miss S. Roleston), and 1st Bessbrook Boy Scouts, (Mr. Archie McKnight, Group Scoutmaster). The ex-servicemen, who wore their military decorations, came smartly to attention as Lord Kilmorey (who was accompanied by the Countess Kilmorey) arrived to inspect the parade. After doing so the parade, headed by the Bessbrook Victoria Flute Band, marched to the site of the War Memorial, were a hollow square was formed.

Addressing those assembled, the Chairman said it had been the wish of the people of Bessbrook of all creeds and classes that there should be a memorial erected to those who lost their lives while serving their Country and Empire during the Great War. It was fitting that these men who voluntarily joined up and made the supreme sacrifice should be remembered. It had undoubtedly given great satisfaction to those who served and were present that afternoon to have the Rt. Hon. the Earl of Kilmorey unveiled the memorial. It was a great pleasure to have him with them, for the Earl did valuable service during the war and was always very willing to help where help was necessary. That stone of Remembrance, explain the Chairman, should not only help to keep the names of those who fell before them, but should also urged the living to do all they could to prevent another war.

‘O God Our Help’ was then sung by the vast assemblage, the Victoria Flute Band providing the accompaniments, after which the Earl of Kilmorey, amid profound silence, unveiled the Union Jack covered memorial “To the Glory of God and in Honoured Memory of the men of Bessbrook and District who laid down their lives for their King and Country during the War.” The Dead March in Saul was next rendered by the Band.

Lord Kilmorey, addressing the assembly, said he wished to tender his thanks and great appreciation to the Committee for the honour they had conferred upon him in asking him to unveiled the Memorial. They were met together there to pay tribute to the men of Bessbrook and district who so nobly responded to the call to arms in 1914 when in the hour of the Empire’s peril they never hesitated to joined up and take their places in the armed forces of Britain overseas, and whereby their gallantry and devotion to duty they fought until the great victory of freedom had been won, 410 men joining up from Bessbrook and district. Many of these young men in the pride of their youth left that happy and peaceful country village and everything that was near and dear to them to answer the call of their King and Country in the time of danger, and of that 410 men 86 never returned. It was the memory of those men who never returned that was uppermost in their thoughts that day, and that beautiful memorial was a worthy token of love and remembrance of those who by their gallant sacrifice gave all that they had.  He congratulated them on the choice of the memorial, and he admired the spirit which prompted then to erect it to the memory of their fallen comrades, and its simple and beautiful design would be a landmark to generations in the years to come that the men of Bessbrook and district answered the call and were not found wanting.  His Lordship referred to many kind deeds done by the Richardson family to help the men at the front during the war and said the gift of that site and of a house for the British Legion for their headquarters show that they had not forgotten the men of 1914. To those of them who mourned the loss of a relative or friend he extended his deep sympathy, knowing that in cherishing their memory they would always do so with pride, and to ex-servicemen and comrades and their families-many of whom had such hard times to face during the last few years-he wished from his heart “Good luck, prosperity, and peace in the years that lie before you.”  (Applause).

The dedicatory prayer was then offered up by Major the Rev. F.J. Halahan, M.A., M.C., C.F., who subsequently addressed the meeting and congratulated the people of Bessbrook on the splendid response which the young men of the village made when “the call” came-a response which could hold its own with that of any community of the same size in the British Isles.  They might, he said, be a difference of opinion as to what form a war memorial should take; but he thought there could be no difference of opinion as to some memorial being erected in a community to keep alive the memory of gallant men who laid down their lives and be an outward token of remembrance and gratitude for the services which they had rendered their country. Memorials like that should be an inspiration to present and future generations-an inspiration to sacrifice and toil. Sometimes people never realized how the blessings of citizenship and the great heritage that was theirs had been won. They had been procured by the sacrifice of those who had gone before. Even through the center of the great national flag of our Empire runs the deep blood-red cross of sacrifice.  All the blessings we have, have gained by sacrifice. That memorial should be an inspiration to the young people standing there that day and also to future generations.  Such memorials at the same time must remind them of the terrible havoc of war-which in his opinion was an inhuman, cruel, savage and unchristian thing.  When they heard people talk about the glory of war, let him assure them that there was nothing glorious about it except the heroism and the splendid comradeship of the men. Surely the world by now ought to have learnt that there must be some better way of settling international disputes than by appeal to the sword! These gallant men had made their sacrifice for the country, and we today should make our sacrifice for the cause of peace throughout the world. That was the work in which the League of Nations was engaged, and it was the work which should receive the support of every Christian man and woman. It had taken Christianity 1900 years to do away with slavery, and it might take another 1900 to do away with war, but that was no reason why we should not make every effort in that direction.  He thanked them for asking him to come there that evening to take part in the dedication ceremony.

The names of the fallen were then read by Colonel W.C. Fitzgerald, O.B.E., D.L., after which “The Last Post” was sounded by buglers from the R.U. Rifles, Depot, Armagh. Two minute silence was next observed, after which came “The Reveille” and the singing of the hymn “Abide with me.”

Captain Rev. T.H. Witherow, B.A., as one who had fought side by side in the trenches with some of the fallen, said he considered it a great honour to be with them in Bessbrook that day and represent the Church with which he was connected. That memorial was not, he said, erected in any spirit of hatred or bitterness, but to perpetuate the names of those who at a great crisis in their country’s history faced death for the sake of a great ideal. He sincerely hoped that that beautiful memorial would be an inspiration to all to face the problems of their day in the same spirit of cheeriness and comradeship as inspired the men of 1914 to face the problems that met then and that it would encourage them to be true to the ideals of loyalty to King and Country and loyal to the ideals of peace and the establishment of righteousness and prosperity in our beloved land.  (Applause).

At the request of Dr. O’Connor, as representing the War Memorial Committee, the Chairman, on behalf of the Bessbrook Spinning Co. accepted the custodianship of the memorial.

The singing of the National Anthem and the placing of the following wreaths concluded the proceedings:-

On behalf of the people of Bessbrook and district, by Mr. Michael Kearney.

On behalf of Bessbrook Spinning Cov., by Mr. Samuel Hood.

On behalf of “A” Company Royal Irish Fusiliers, by Captain C.H. Ensor.

For Newry Branch British Legion, by the Rt. Hon. the Earl of Kilmorey, D.L.