This page contains  five images, the names of the FALLEN, those who served, and a report on the unveiling and dedication ceremony. Additional images available on request to uwms@outlook.com 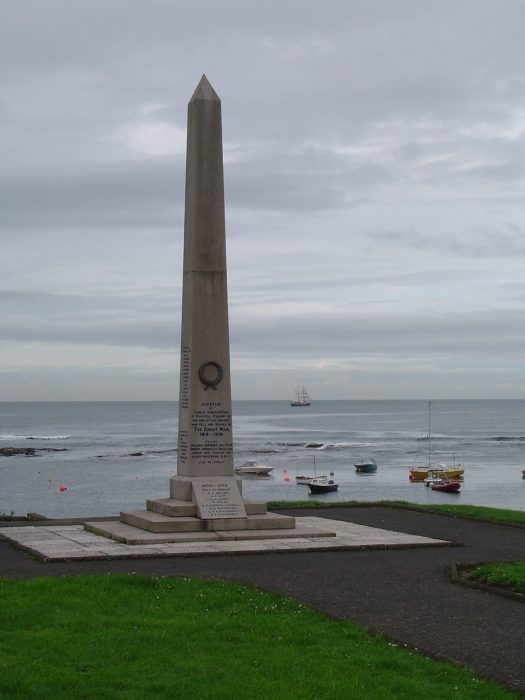 Erected by public subscription in grateful memory of the men of the district who fell and served in the Great War 1914 – 1918.

These Served at Home Service

These Served in the Merchant Service

Groomsport, County Down, has perpetuated the names of its heroes by the erection of a beautiful memorial, simple in its design, but yet a fitting tribute to those gallant heroes who laid down the implements of everyday life, and went forth eager in their desire to help the Mother Country in a time of distress, and at the same time show to the world at large that Ulster is till as loyal as ever to the King and Throne of England. The memorial, which takes the form of a three-plane base, carrying a plinth and square, shaft, with oversail scotia and ovolo, and bearing a graceful obelisk of pleasing mathematical proportions, is established almost at the entrance to the village – the most suitable spot for such a monument, where all eyes can behold and remember. The whole structure is in grey granite, and it bears the dedicatory inscription as follows:

The UNVEILING and DEDICATION Ceremony.

The unveiling ceremony took place on Saturday evening, in extremely cold weather, and was characterised by the utmost simplicity, but was at the same time most impressive. Three troops of the Boy Scouts, the 1st,  2nd and 3rd, attended from Bangor for the occasion, and were under District Commissioner McFeeters, with SM Greenaway and ASM Kinley. There was also a representation of the Newtownards Boy Scouts, and after Major-General Simms had taken the salute.

The chair was occupied by the High Sheriff, Mr W S Kinghan, DL, who was accompanied by Colonel the Right Hon. R D Perceval-Maxwell, DL; Captain Ker, DL, Miss Maxwell, and others interested in the movement. The introductory prayer was offered by Rev. Walter Nelson, MA, after which the rector, Rev. E Harris, BD, read a portion of scripture, whereupon the chairman asked Colonel Maxwell to read out the list of the names of those who made the supreme sacrifice.

Colonel Maxwell said – “I read the names of these men with pleasure, as I had the honour of fighting with them. They are to be held in deathless memory.” He then read the following names: –

The Chairman then asked Major-General Simms, MP, to unveil the memorial, and the cord which bound the drapery of Union Jacks was then unloosed by the Major-General, when the beautiful monument, containing a roll of four score names, was exposed to view. General Simms also offered the dedicatory prayer, while the “Last Post” was sounded by buglers from the Newtownards troop of Boy Scouts.

Major-General Simms, MP, addressing a large assemblage, said by that day’s service they had consecrated a fresh holy spot in their village life, for they had met together, friends and neighbours, with the relatives and friends of their heroic dead, to thank God for the faith and courage of their personal beloved who had laid down their lives in the Great War. Gladly had those men responded the call of battle in the cause of freedom and justice, and their memory was and every should be a holy thing which drew them nearer to God, leading them there to pray together that His blessing might rest with them for ever, and to thank Him Who had crowned their efforts with success, and did not let their men die in vain.

Those heroes were taken – most of them – in the flower of their youth, flushed with health and strength, beloved and loving, with a strong earthly love, full of hope and promise. Most of them, too, were taken unawares in the thick of battle, thinking, as brave men did, not of death, but of victory and of their good cause. Nevertheless they did not doubt that those men died in the Lord.

For what was it that urged a man to love justice, and mercy, to hate cruelty and oppression, to lay down his own life that those who were dear to him might freely and safely live? It was the consciousness of something outside, above, and beyond himself that made for righteousness. It was the quickened sense of human brotherhood; it was the cheerful adoption of the law of sacrifice; it was religion; it was Christ. It was the consciousness of life beyond the world which led a man that was a man at all, to hazard this poor mortality, like his fathers before him, in order to make this world a happier, better place for those who should come after him. Therefore let them think that day of their dear dead – of those men dying that they might live as living immortality; that they died inspired by their sacrifice of all that this world held dear, and made for to stand before Him by Whose precious death mankind was bought without money or without price.

For those whose days were still darkened by the loss of dear ones, it remained only to go forward inspired by the memories of their heroism, their faith and their unselfishness, till their task also was ended and their fight was won.

The buglers having sounded the “Reveille,” a hearty vote of thanks was passed to Major-General Simms, Miss Maxwell, Colonel R D Perceval-Maxwell, and Mr Kinghan on the proposition of Mr Campbell-Gardner, seconded by Mr J Gunning, and the impressive proceedings ended with the singing of the National Anthem.

The memorial is enclosed by a suitable iron railing and gates, the space between the base of the railings and the base of the column being filled in with snow-white stones, which provide a most charming effect. It is a tribute to heroes, of which every subscriber should feel justly proud, and one which should serve as a just reminder to those of generations yet to come, of gallant heroes of the village who were remembered by their friends who remained.

The site, it should be stated, was the gift of Miss Maxwell, of Groomsport House, and Colonel the Right Hon. R D Perceval-Maxwell, DL. From the first the movement to erect the memorial met with enthusiastic support, and little of the cost – estimated at approximately £350 – remains to be collected. 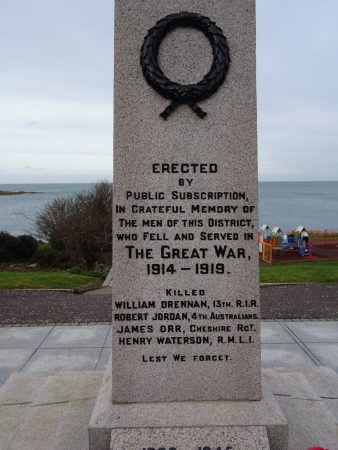 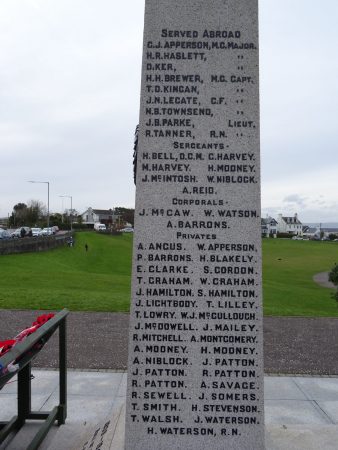 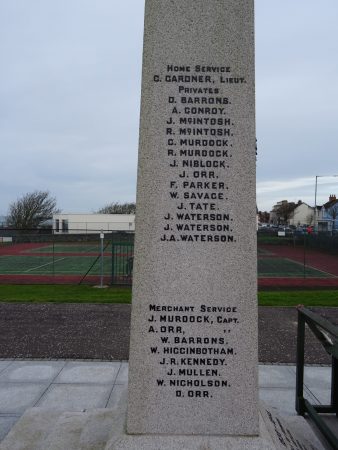 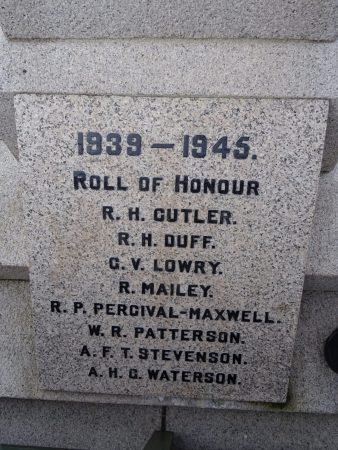