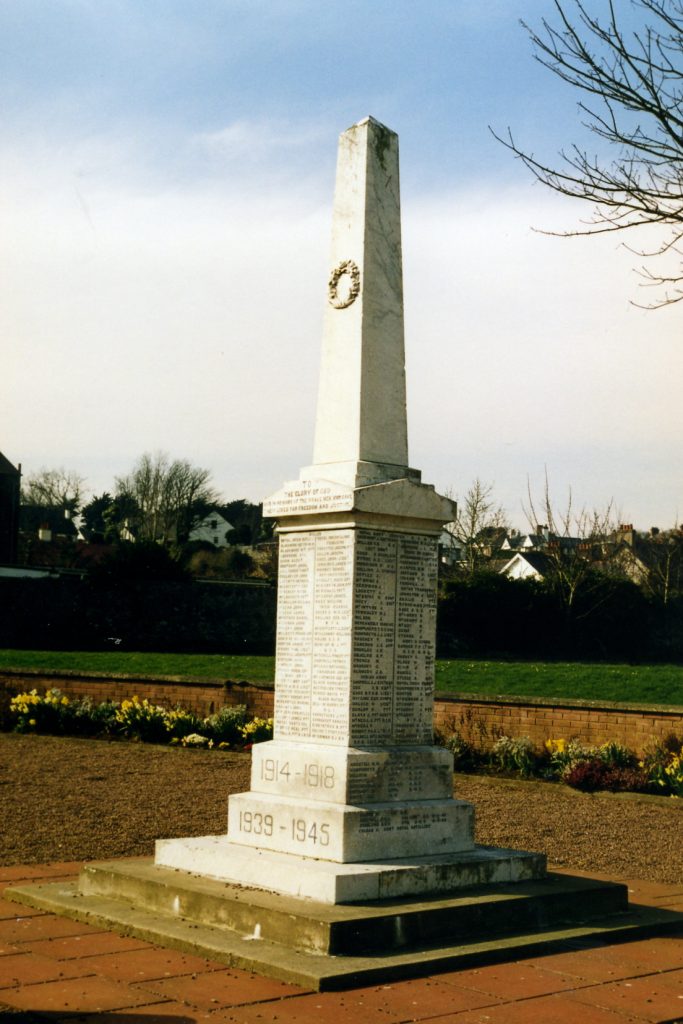 “To the Glory of God, and in memory of the brave men who gave their lives for freedom and justice.”

After ten eventful years, since the roar of the guns ceased, Ballycastle has awakened to the sense of duty and honour, and raised a fitting memorial to perpetuate the memory of those gallant men from the town and district who gave their lives for King and country.

The memorial is situated on a square, opposite the Manor House, adjacent to the seafront and within sound of the waters of the [River] Moyle. It takes the form of an obelisk, of first quality Cecilian marble with a spire, seven feet high, on which is graven a wreath. On the memorial is the inscription; “To the Glory of God; and in memory of the brave men who gave their lives for freedom and justice.” The memorial was designed and constructed by Mr. B. M. O’Connor, an ex-serviceman and vice-chairman of Ballycastle Urban Council, and is in itself a memorial to his skill and workmanship.

That the effort to erect a memorial was brought to a successful fruition was mainly due to the energetic and whole-hearted work of the memorial committee, compos­ed of Captain S. J. Lyle, M.C., J.P. (chairman), Mrs. M’Clarty, Mrs. Greer, Miss Stewart, Rev. John Jackson, D.D., Messrs. S. J. Gilmour, B.A., D. J., M’Michael, R.A. Young, W. J. M’Clarty and E. Molloy, with Mr. J. A. M’Cullagh, Northern Bank, hon secretary, and Mr. A. S. M’Vicker, who has rendered yeoman service in the cause of the ex-servicemen, as hon. secretary.

Armistice Day dawned grey and sunless and rain fell pitilessly, but fortunately there was a respite during the unveiling ceremony, which took place in the after­noon. The scene was a most impressive and memorable one. The ex-servicemen of the town and district, augmented by a large contingent from Ballymena, and re­presentatives from Portrush and Dervock, in charge of Captain Lyle, were drawn up facing the platform, and flanked by H.M. coastguards, under district officer Richard Down, R.N.; Girl Guides, commanded by Miss Boyd; Boys’ Brigade, with Mr. G. H. Scarlett, J.P., in charge, and R.U.C., in command of Sergeant D. Smith. The choirs of the Presbyterian, Ramoan, and Ballycastle churches were stationed at the rear, and there was a very large attendance of the public.

Mrs. Greer, widow of the late Senator T. M. Greer, D.L., Ballycastle, who per­formed the unveiling ceremony, made an inspection of the ex-servicemen and other units, being: accompanied by Cap­tain J. Casement, D.S.O., R.N., President of the Ballycastle Branch of the British Legion, and Captain Lyle.

The opening prayer having been offer­ed by the Rev. Mr. Topley, and the 100th Psalm sung, Captain Lyle read the names of the fallen from the parishes of Ramoan and Culfeightrim, which numbered fifty-five and are as  follows : –

Captain Casement said it was a great honour and pleasure for him to preside on that memorable occasion, the unveiling of a memorial to the officers and men of that district who gave their lives in the great war. He thought the committee had made a very good choice indeed in ask­ing Mrs. Greer to unveil the memorial. Mrs. Greer had the affection and esteem of every person in Ballycastle and district, and so had her late husband and son. He would now ask Mrs. Greer to unveil the memorial.

Mr. O’Connor then presented silver scissors to Mrs. Greer, who said that this stone of remembrance was set up as a permanent memorial to the valiant men, who at the call of King and Country went out on the outbreak of war to fight for them. They went out and endured untold hardships all day and night and through those desperate years. Some of them came back, but many also passed out of the sight of men, dying on the field of honour. On this stone they celebrated the name and fame of all those men from Ballycastle who answered the call of their country.

The “Last Post” having been sounded by Mr. M’Mullan, Mrs. Greer unveiled the memorial, which was then dedicated by Rev. Dr. Jackson.

With the “Reveille” sounded, the hymn “O God Our Help in Ages Past” was sung with great fervour, and a portion of scripture was read by the Rev. F. W. Davis.

The laying on of wreaths was then proceeded with, the first being by Mrs M’Glarty-

The Chairman formally handed over the Memorial to Mr. Belford. Chairman of Ballycastle Urban Council, to the Council’s care and keeping.

Mr. Belford said that on behalf of Ballycastle Urban Council, the ratepayers and residents, he had pleasure in taking over this memorial, with the hope and belief

That it would be looked after in a manner worthy of those for whom it was erected.

Mr. M’Cullagh proposing a vote of thanks to Mrs. Greer, said they all knew the very deep interest this lady took in everything connected with the well-being of ex-servicemen, and that she gave of her best in the cause of King and country. They were deeply indebted to her for her kindness in coming there that day.

In seconding, Mr. Telford said Mrs. Greer had always show her willingness to give of her best to any good cause, especi­ally the cause of the ex-serviceman. Ballycastle owed her another debt for coming there and performing the noble act which she had done so gracefully.

Moving a vote of thanks to Miss Boyd, the donor of the site, Mr. Markey said that on behalf of the members of the Ballycastle Branch of the British Legion and the War Memorial Committee, he de­sired to heartily and cordially thank Miss Boyd for her kindness. The site was an ideal one, lying under the shadow of Ben-more.

Miss Boyd, in reply, said she did not need any thanks for the gift of the site. In fact all they owed to these men was more than any of them could ever hope to repay.

Mr. M’Vicker, tendering thanks to Mr. O’Connor, thought they would all agree that the obelisk was a memorial in itself to Mr. O’Connor. The design as they saw it was his own. They thanked him very much for the great care, skill, and work­manship with which he completed this stone. He also coupled the name of Mr. Robinson, Town Engineer, who gave his services free, and thanked him on behalf of the War Memorial Committee.

Mr. John Jamison, J.P., seconding, said the Memorial spoke for itself; both the design and workmanship seemed to be perfect. Certainly nothing would be too good for the gallant men who fought and bled and died for King and Country and for them.

Mr. O’Connor thanked the subscribers who made it possible for him to carry out the work, and hoped he had satisfied everybody. He hoped also that the general public would have the same spirit as the War Memorial Committee by giving a trial to an ex-serviceman before going elsewhere.

The Benediction having been pronounc­ed, the proceedings terminated with the singing of the National Anthem. 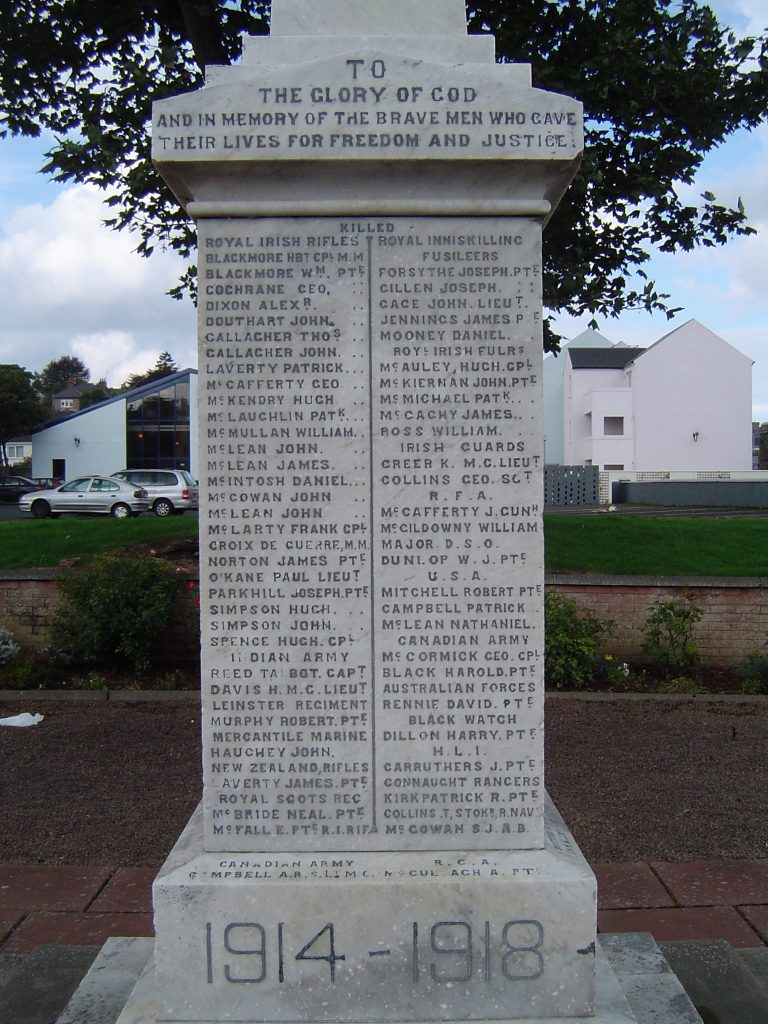 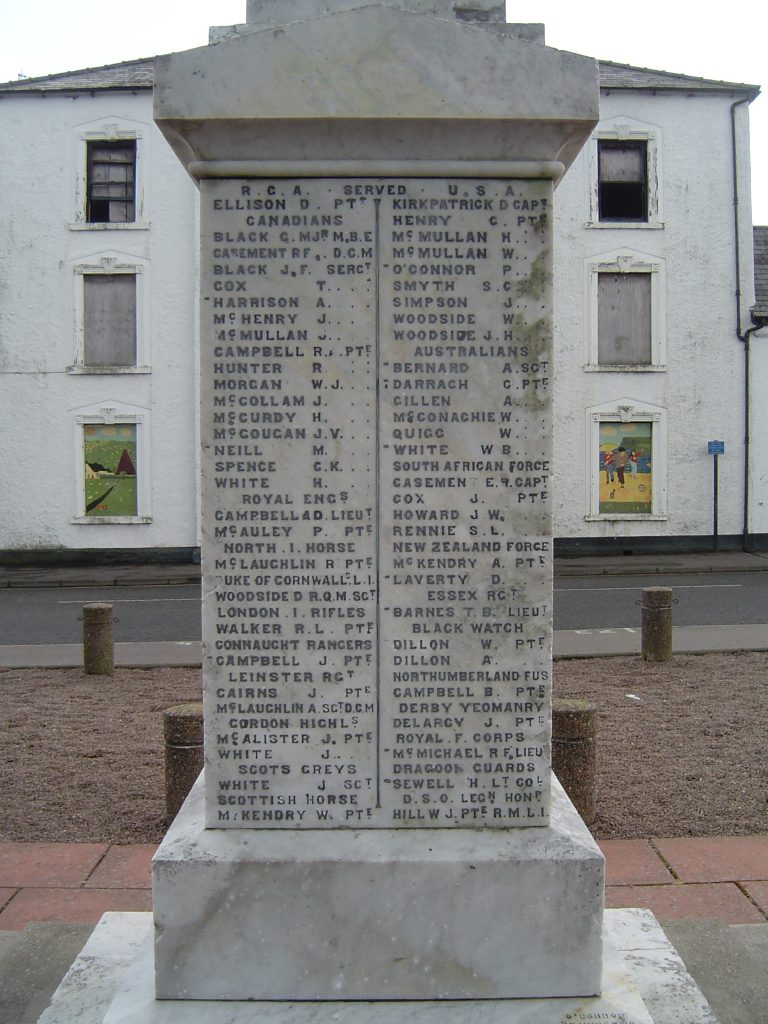 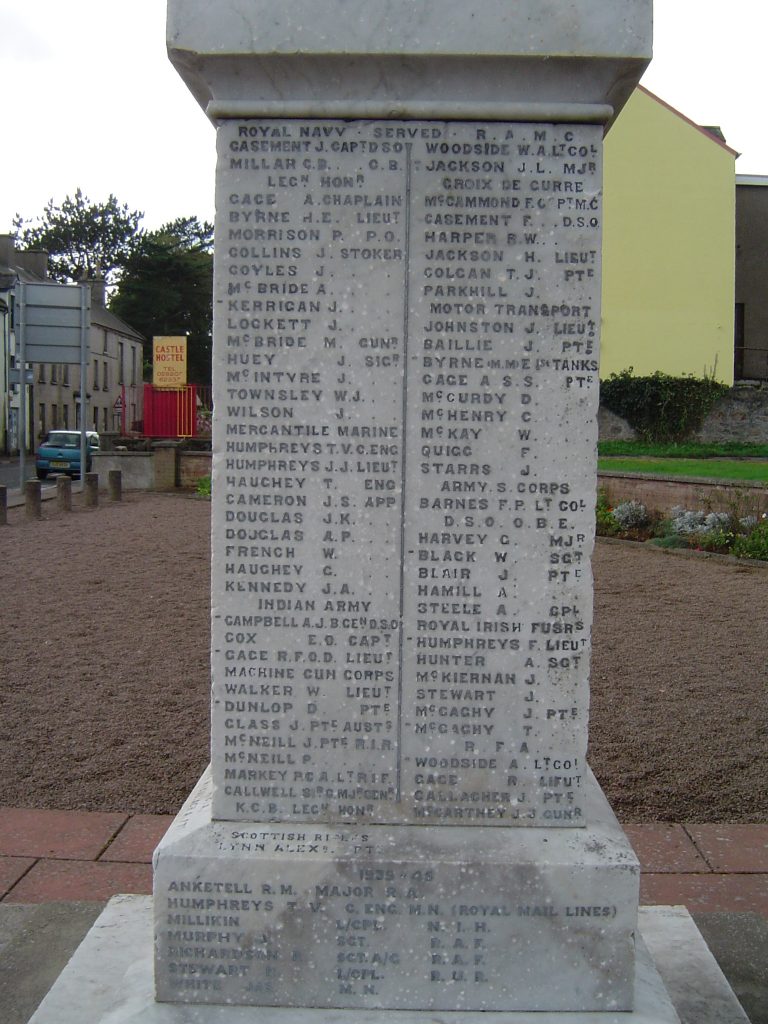 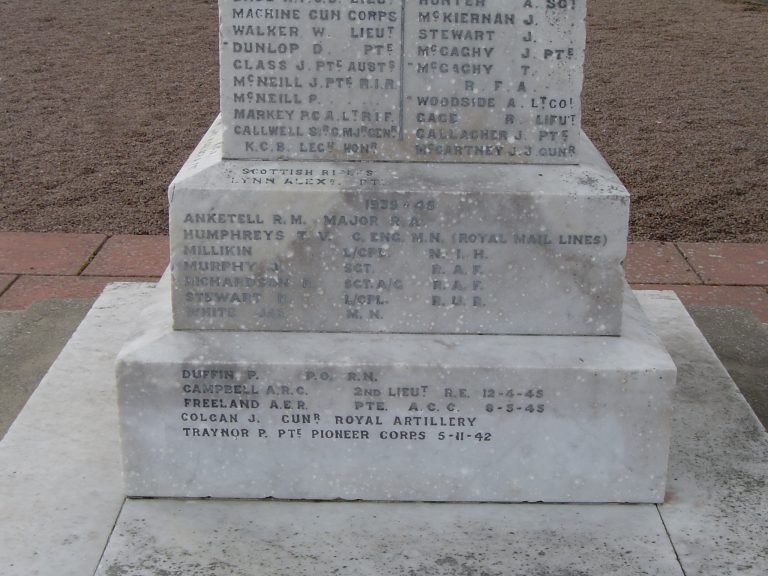 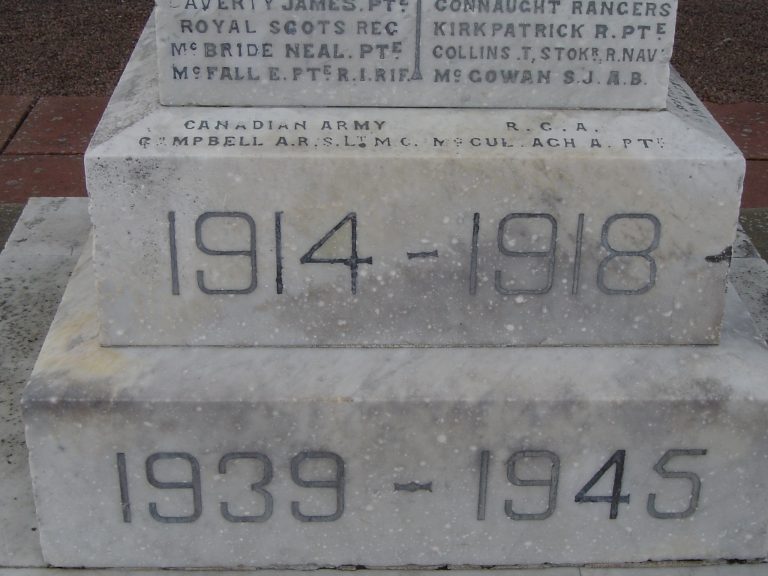