This page contains five images, the names of the FALLEN, and some of their biographical details. 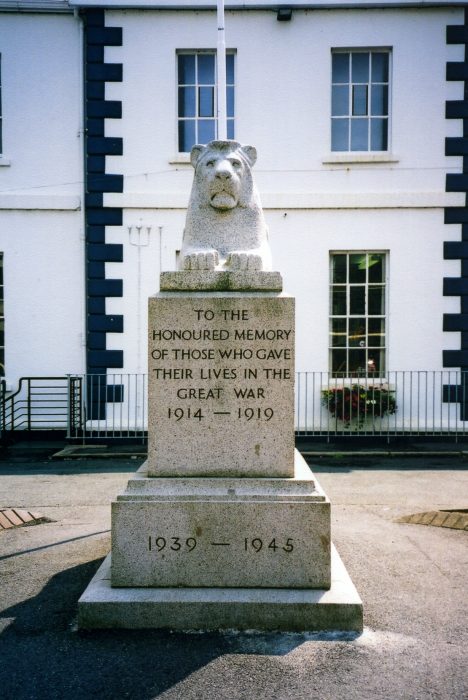 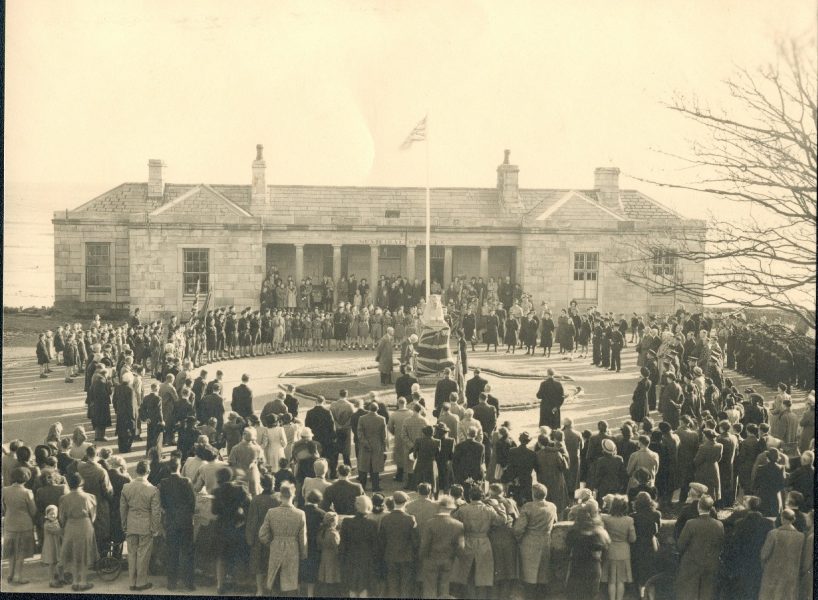 Unfortunately, to date, it has been impossible to find a date for the unveiling and dedication of the Newcastle, Co. Down War Memorial.

On 23rd January 1928, the Distric Council decided to accept conveyance of site and the custody and maintenance of War Memorial.

Frank Wiles was born in Larne, County Antrim and educated at Larne Grammar School. He studied sculpture at Belfast School of Art, in Paris, and at the Metropolitan School of Art, Dublin. In the national competition of Schools of Art, he won a gold medal in 1914. He lived in Dublin until 1921, and exhibited with the Belfast Art Society and the Royal Hibernian Academy, Dublin. The Newcastle, County Down, War Memorial was sculpted by him and a bronze plaque to John Moore Killen in the Royal Hospital, Larne, is his work. He died in Larne in 1956

In 1928 the Council decided to accept conveyance of site and the custody and maintenance of War Memorial.

After the 2nd World War, the Memorial was moved to its present location isin front of the Tourist Information Office, 10-14 Central Promenade, Newcastle.

Digges La Touche, A., Lieutenant Royal Irish Rifles. The [Newcastle] Golf Club’s flag was again at half-mast last Saturday.   The mem­bers mourn Lieut. A. Digges La Touche, a gallant young officer, killed in action in France.  A plus 2 golfer, on several occasions he went far in the Irish Championships. At New­castle he was exceedingly popular, and deservedly so. When the war broke out, he got a commission in the 5th Royal Irish Rifles, and after being sta­tioned at Belfast and Holywood barracks, left for the front on 21st June. He was attached to the 2nd Royal Irish Rifles, which battalion in the South African war was commanded by his uncle, Colonel Eager, who died of wounds received at Stormberg. His elder and only brother, Second-Lieutenant the Rev. Dr. Everard Digges La Touche, Sixth Reinforcement, 2nd Battalion Australian Imperial Force, was killed in action on 6th August at the Dardanelles. The war is exacting a fearful toll of the best manhood of the nation, and bring­ing sorrow day by day to counties homes, rich and poor alike. He was a son of Major Everard N. and Mrs. Clementine Digges La Touche, of 56, Highfield Rd., Rathgar, Dublin.

Digges La Touche, Australians. La Touche was a clergyman of the Church of England-a North of Ireland man originally, who was educated at Trinity, Dublin, and came to Sydney some years ago. He will be remembered as a fighter there, When the Rationalist challenged the Church to meet them in debate it was Digges La Touche who took the challenge up. He had not the detached reasoning powers that were really needed to make the best of the case for Christianity, but he could fight, and fight he did. And when the war broke out and he could not obtain an appointment as a chaplain he plunged straight in and enlisted as a private in the infantry. ‘If I obtain any promotion,’ he said to the Dean of his diocese before starting. ‘I want it to be promotion which I win by my own efforts.’ He tried to join the ranks of the 2nd battalion, and was rejected for varicose veins. He went and had the varicose veins cut out, and so missed the first force, but enlisted in the 13th battalion, and rose to be a sergeant. When officers were wanted to bring a batch of reinforcements to the 2nd Battalion La Touche was chosen and promoted to 2nd Lieutenant. And early on the morning of 6th August this ex-diocesan missioner and a lecturer for the diocese of Sydney arrived with his detachment at Anzac. That evening was to be the attack on Lone Pine. It was within the choice of reinforcement officers to go back to Alexandria, but La Touche would not look at it. He went over the parapet at 5. 30., with the first rush. Within a few minutes he had been mortally wounded. He managed to roll down the slope of the spur into shelter, and to crawl back to our own lines by the morning.  He died amongst his own people.

Greer, John, Private 6/10663, was with the 6th (Service) Battalion of the Royal Irish Rifles when it landed at Salonika on 5 October 1915. From his number it seems likely that John enlisted between 8 and 21 August 1914 and joined 6th Battalion at the outset but did not, for some reason, sail with the battalion to Gallipoli. At some point he transferred to 2nd Battalion and was killed in action in Belgium on 10 August 1917. [with thanks to Chris}

Heslip, Isaac, Private, No. 529, 10th Royal Irish Rifles, was accidentally killed in France on the 12th March, 1916. He was the third son of Mr. James Heslip, Murlough-Lodge, Newcastle.

Johnston W., Sergeant, Royal Irish Rifles, died from wounds at a casualty clearing station overseas on the 14th February [1917]. Johnston was a joiner in the employment of the late Lord Annesley. For some years he was one of the most proficient members of the Dundrum Rifle Club. As a member of the 1st battalion South Down regiment, U.V.F., he was one of the first to enlist. Four months ago, he was promoted sergeant on the field, and only in December last he was home on leave to see his wife and three young children. With them and his mother and sisters, sympathy is felt.

Law, Victor, Corporal, Royal Irish Rifles. Mr. D. Law, Newcastle, has been notified that his youngest son, aged 19, Corporal Victor Law, 13th R.I.R., was killed in action on the 26th June, 1916. Your son (writes Lieut. Hardy) and every one in the party sent out against the enemy behaved with the utmost gallantry. He was killed instantly by a burst­ing shell, everybody, not only in No. 9 platoon, but in the whole battalion, is sorry at losing Victor, for not only was he a cheery comrade, but he was a very brave and efficient soldier. For several mouths he had held the position of corporal in charge of the scouts—a post which only a very brave corporal and efficient man could have held. I hope it will be some satisfaction for you to know that in the action in which Victor was killed our party accounted for five Germans to every Irishman killed or wounded. So, his death was well avenged. You have lost a splendid son, Britain a magnificent soldier, and I have lost the best corporal in my platoon, and you may well be very proud of him. He was buried in a little cemetery about a mile behind the firing line.

MURPHY, PATRICK J., Signaller, Royal Inniskilling Fusiliers, has been missing since September, 19, 1916. Any information concerning his whereabouts should be sent to Mrs. John McVeigh, Railway Cottages, Newcastle, County Down. Photograph in the Belfast Tele.

Nevin, (Dr.) Captain, Royal Army Medical Corps. Tributes to his memory have been paid by colleagues of the late Dr. Nevin, Captain Royal Army Medical Corps, whose death occurred recently at Newcastle. He contracted malaria at Salonika.  Col. S. F. Clark, commanding No. 36, General Hospital, writes: ‘It gave us all a great shock to hear that he had joined the ever-growing band of gallant men and women who have died for Britain in this great war. He was most popular in the hospital among all ranks, and the bad news cast a gloom over the place, not only among ourselves but also among Serbians who knew him.’

Skillen, Sidney, Private, 13th R.I.R. An obituary notice appears of a Tullybrannigan soldier, Private Sidney Skillen, 13th R.I.R., who was killed on the same night as Corporal Law, his death, caused by a bursting shell, being instantaneous. ‘He showed the utmost gallantry,’ Lieut. Hardy writes, ‘and besides being a brave soldier, was one of the nicest and cheeriest of a very nice lot of boys.

Rec: – a deputation of the British Legion with ref. to the raising of a war memorial and as to the condition of the War Trophy under the Council’s charge.

Decided to meet representatives of the British Legion on 5th November 1924 at 8.00 to make arrangements in connection with providing a war memorial, the Blackrock promenade be put in order. (The War Trophy is believed to have been placed at the Blackrock)

It was decided to accept conveyance of site and the custody and maintenance of War Memorial. 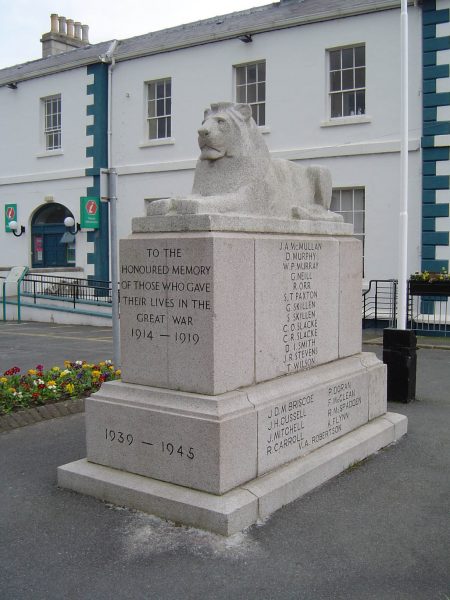 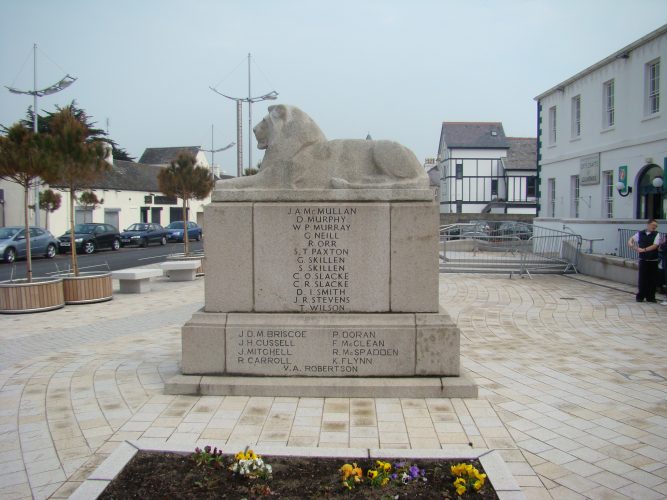 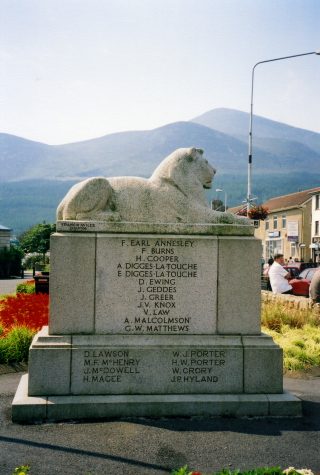