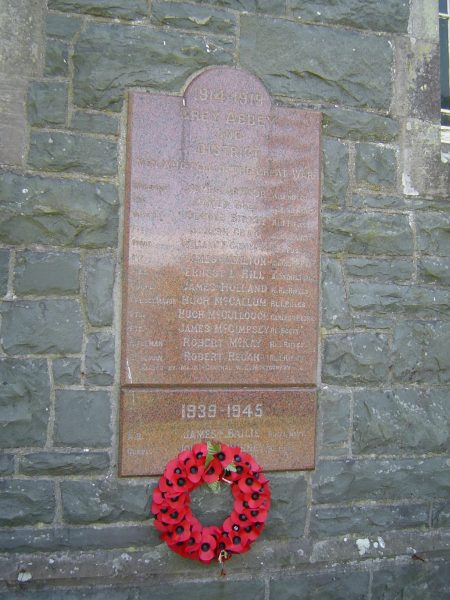 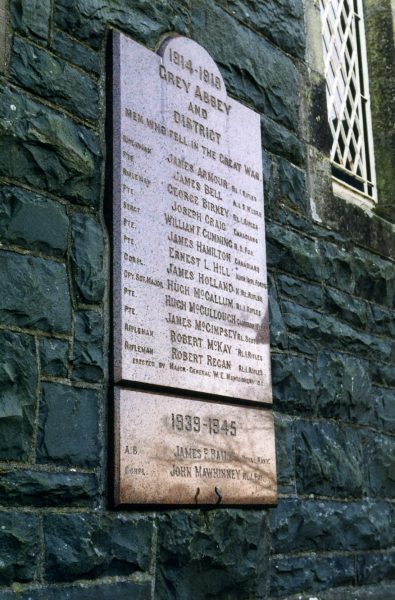 On Saturday afternoon, 2nd  April, 1921, a war memorial stone to the man from Greyabbey and district who fell in the war was dedicated by the Lord Bishop of Down and Connor. The stone, which has been constructed by Messrs. Purdy & Mallard in Peterhead granite is placed in the outer wall of the parish church, facing a main road, and bears the names of the men from the locality who gave their lives for the Empire. The tablet is the gift of Major-General W. E. Montgomery D.L. The service on Saturday was of an impressive nature. After the opening prayers, read by the rector of the parish, Rev. Canon Whatham, an inspiring address was given by Rev. J. H. Simms, c.B., C.M.G. The hymn “O Valiant Hearts” having been sung, the congregation reassembled outside the church. The names on the memorial tablet were then read by Major-General Montgomery, who in the course of a short address, bore testimony to the gallantry of the man from the district who volunteered for service during the war, and referred to the courage and self-sacrifice both of the fallen and of those who had been spared to reach home again. The tablet was unveiled by Mrs. Montgomery. The Lord Bishop dedicated the memorial, the benediction was pronounced by Rev. J. H. Simms. The proceedings concluded with the singing of the National Anthem. Numerous wreaths and other floral tributes were placed at the foot of the memorial tablet on Sunday, forming, with the background of the church and the stately ruins of the old abbey and the great trees of the park around a beautiful picture which was lit up with the glory of spring sunshine.

Many thanks to Elma Wickens for the following information.

Sergeant William F. Cumming, Royal Scots Fusiliers, of Grey Abbey.  Killed in action in France on 5th June 1917.  He joined the Ayrshire Yeomanry in Sept. 1915 and was promoted to the rank of sergeant ten months afterwards.  He passed very creditably as 1st class machine gunner, and also 1st class in musketry, being afterwards appointed as instructor at the school of musketry.  On learning that his regiment was not going to France, he got transferred to the Royal Scots Fusiliers in Dec. 1915 and volunteered for active service the same month.  He was wounded in April 1917 by a shell at Arras, and had only rejoined his regiment a short time when he was killed.  For about 7 years before joining the army he was employed as a gardener in Scotland, in which business he was very successful, having obtained a large number of prizes and medals for essays on horticultural subjects.  He was 28 years of age, and his bright and cheery disposition, his Christian principles, and intellectual qualities won for him the respect and admiration of all who knew him.  He is the only son of Mr. John Cumming of Grey Abbey, for whom the greatest sympathy is felt in the great loss he has sustained.

James Holland, Lance-Corporal, 8th Battalion King’s Royal Rifle Corps.   Age 20.  Killed in action in France 3rd August 1915.  2nd son of William Holland, Greyabbey.  Ypres (Menin Gate).  Service No. A/189.   Mr. Wm. Holland, of Grey Abbey, has received official notification that his 2nd son, Lance-Corporal James Holland, 8th Batt. King’s Royal Rifles, aged 20 years, was killed in action in France on 23rd Aug. 1915.  He was previously wounded by a shell, and had only returned from hospital to the firing line about a fortnight when he met his death, which happily was instantaneous.  He enlisted at the outbreak of war at Llanelli in South Wales, where he had resided about 3 years, and was employed at the tinplate works.  He was a very promising young man, and received promotion on the field, where doubtless further promotion was in store for him only for his premature death, which is deeply regretted in his native village of Grey Abbey.  (Scrapbook – photo).

The Craig family lived in Belfast (1890); in Ferry Street, Portaferry (1901) and in Greyabbey (1911). For some years Royal Irish Constabulary (RIC) Sergeant Robert Craig was stationed in Greyabbey and he and Margaret, who was born in Co Longford, had six children:

In 1911 Joseph Craig was working as a National School Monitor and he and Mary Anne, who worked as a dressmaker, were living in Greyabbey, separately from the rest of the family.

Joseph Craig left Greyabbey in October 1912 and went to Toronto, Ontario where he remained until March 1913.  From Toronto he went to Saskatchewan to take up a Government appointment as a school teacher.  On 16 December 1914, he enlisted in Winnipeg, Manitoba and in his attestation papers it was noted that he was 5 feet 8½ inches tall with a medium complexion, brown eyes and dark brown hair.  After a period of training in Winnipeg he was posted to the Western Front in May 1915.

Except for a one-week furlough in February 1916 which he spent in Greyabbey, Private Joseph Craig (No. 81186) served on the Western Front continuously until he met his death in a front trench.  He was killed when an enemy mine exploded.  During the morning of the day Joseph died he wrote a letter to his parents.  He had returned at 4.00 am from a bombing expedition in a German trench and, in the letter, he told his parents that he had just heard the cuckoo for the first time that year.  At foot of this letter Joseph’s Sergeant added a note stating that Joseph had been killed in action later that very day.

In an article in the Newtownards Chronicle Private Joseph Craig was described as a devoted son and brother and an ‘extremely fine specimen of youthful manhood – mentally, morally and physically’.  He was 24 when he died, and he was buried in Woods Cemetery, Belgium.  There is an inscription on his CWGC headstone: