This page contains four images, the names of the FALLEN 1914 – 1918 and background information on the memorial. More images available on request at uwms@outlook.com 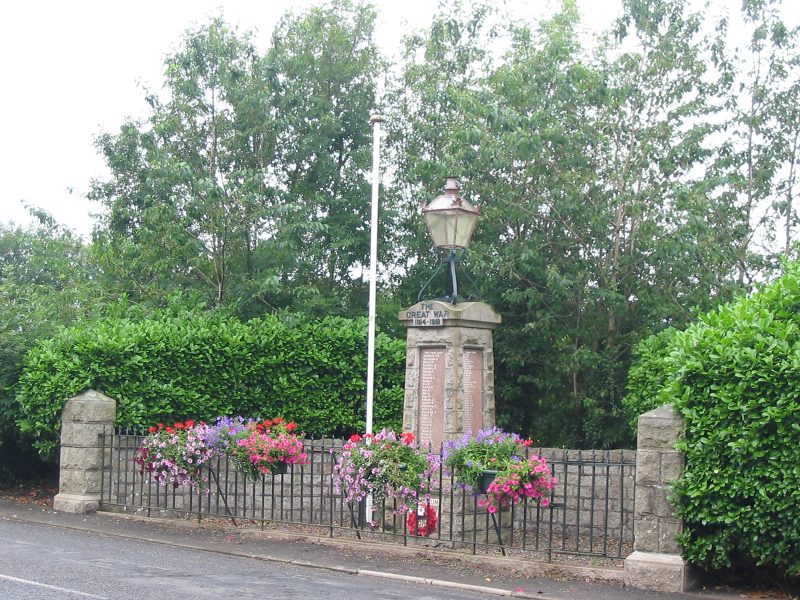 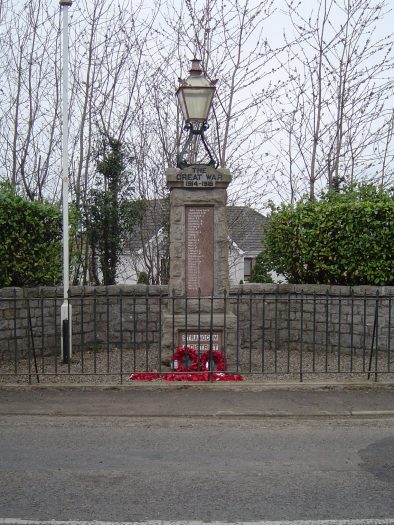 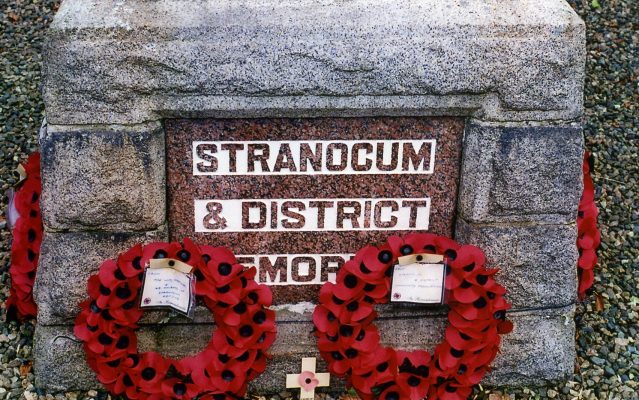 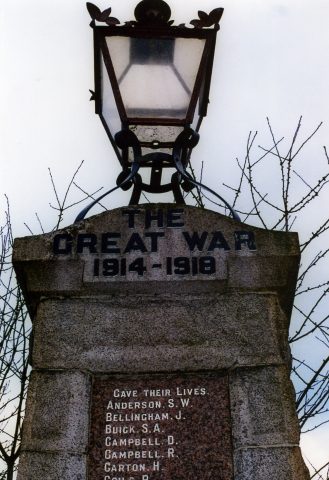 Decision to Erect a War Memorial at Stranocum.

A movement due largely to the initiative of Lieut-Col. G. Ford-Hutchinson, Rangerford, is in progress to provide a suitable memorial to the brave soldiers of the district who have made the supreme sacrifice in the great war. A preliminary meeting for the promotion of the project was held in the Recreation Hall. There was a large and representative attendance, and Colonel Ford Hutchinson, who was moved to the chair, invited an expression of opinion. After considerable discussion it was unanimously resolved that a public memorial ought to be provided. It was further decided that this should take the form of a war trophy of some kind erected on a pedestal, on which the names of the fallen will be engraved.  A representative committee, with power to add to its number, was appointed to carry out the wishes of the meeting. The site chosen is an ancient recess on the road from Stranocum to Ballymoney, where the road from Kilraughts district abuts on it. The requisite permission to use this position has been obtained from the county authorities. The site commands a most extensive view of all that part of Co. Antrim which lies north of Stranocum, and a brilliant electric light is to be placed on it. Be­sides giving a handsome subscription, Lieut.-Colonel Ford-Hutchinson is undertaking to supply and regulate the necessary electric cur­rent from the generating plant at his resident.

A beautiful and appropriate war memorial has been erected by the people of Stranocum and district to perpetuate the memory of the gallant lads who fell in the war and as a tribute to the noble service of those who survived hardship and dangers in the various theatres of the war. The memorial takes the form of a monumental column of rock faced granite with three panels of polished marble, on the front being inscribed the names of those who gave their lives and on the side panels the names of those who served and survive. Twenty-nine laid down their lives and ninety returned. The monument is surmounted by a lamp, the light from which will be visible for miles around. The whole is surrounded by a granite wall and railings, and shrubs have been planted in the vicinity. Originally it was intended to erect the monument with granite and concrete, and funds sufficient for that purpose were subscribed. However, it was found that a permanent and satisfactory memorial could not be erected in this form, and it was decided to use granite and marble for the whole work. For the purpose of raising funds to cover the increased expenditure Mrs. Ford Hutchinson organised and conducted a successful bazaar at Stranocum House on Wednesday. There was a large and fashionable attendance when Mrs J. Stuart, Somerset, declared the sale open.

Captain S.J. Lyle, M.C., J.P., who presided, said for the greater part of the war he was in command of a company recruited entirely in North Antrim. The majority of the names on the memorial were names of men belonging to that company. All through the war those who were unable to be with them at the front did everything possible to help them through. Anything the men asked for that could possibly be sent they did send. If warm mufflers arrived in the heat of summer or cooling drinks when they were in snow it was not the fault of the people at home. (Laughter.) If the men who returned wished for anything it was that the names of their comrades who fell should not be forgotten. He did not think that anyone who had not the experience of service in the front line could ever realise what the comradeship which existed in the army meant. He never conceived anything like it before, and was certain that such a spirit of comradeship could not exist unless in similar circumstances. “I tell you,” said Captain Lyle, “that if a census was taken of all the men who served in the front line the desire above all others would be that the names of their comrades whom they lost should be honoured as they deserved to be as long as our race lives in this country.” (Applause.) When their war memorial was completed they must not think that all the debt was paid. A great many men had come back from the war, and as long as they had life it was the duty of the people to see that they have a fair chance and a little more. (Applause.) It could be well understood how difficult it was for those who came back to settle down to the everyday duties at home. Even those who had come home to luxury and comfort had found it difficult. He was sure that the people would give the men a chance, a second chance, and a third chance. He was not appealing for charity-indiscriminate charity did more harm than good. He was appealing to them to make up their minds as to how the men could be helped and given at fair chance. (Applause.)

Mrs. Stuart, in performing the opening ceremony, said praise was due to Mrs. Ford Hutchinson for organising the bazaar. She was universally beloved for her kind-heartedness, ever ready sympathy, and energy in promoting the cause of every good work. Surmounting their memorial was a lamp, a fitting and permanent reminder of those who died that they at home might live. They left all that was dear to them, endure hardships, faced danger, and passed out of the sight of men by the path of duty, giving up their lives. Let those who came after never forget their sacrifice. (Applause.)

Rev. Thomas Caldwell, in proposing a vote of thanks to Mrs. Stuart, said during the years she had resided at Stranocum House Mrs. Stuart commended herself to the community by her splendid qualities and desire for the well-being of the immediate neighbourhood. (Applause.) Secondly, Mrs. Stuart was an Australian born. In the war nothing was more splendid than the wonderful loyalty displayed by all parts of the great Empire. They would all agree that Mrs. Stuart was a worthy representative of that great part of the Empire-Australia. (Applause.) Mrs. Stuart had made reference to the lady of Stranocum House. Mrs. Hutchinson had been away for eight years, her return to the locality being delayed by the war. The last thing she did before leaving was to assist in providing a hall where the young men of the district could meet for self-improvement. On her return the first thing she did was to organise that bazaar. He suggested that in the event of there being a balance after liquidating the liabilities with regard to the memorial it should be devoted to improvements to the local school, so that it might meet the requirements of the National Board of Education. (Applause.)

A vote of thanks was passed to the Chairman, on the motion of the Rev. T.A. Willis, M.A., seconded by Rev. A. Crothers.

Mr McFall, in the absence of Mr Leslie, moved that the Local Government Board be requested to invest the Council with urban authority with a view to accepting the custody and maintenance of the war memorial in Bushmills. He thought the area of charge should be the rural district, as the men who had gone forth had not fought for any particular district, but for them all.

Mr Patterson- For the Empire.

Mr McFall-There will be no expense or anything on the rates for the erection of the memorial.

The Clerk-There may not be anything for about ten year, but by the end of that period it might be different.

Mr Macafee said a memorial was to be erected at Stranocum, and the Braidwater Spinning Company, who had sold their mill at Balnamore, had offered to erect a memorial there. The same powers would be required. There would also be a memorial for Ballymoney.

The Clerk-But that will be a matter for the Urban Council.

Mr Macafee said if there was no expense in connection with Bushmills memorial there would be none for the others.

The Chairman-The only possible expense to the Council will be that of maintenance should anything occur in the future.

Mr. McFall said even they might have to spend a little in years to come he did not think there would be anything to grumble about. If the men have not gone to fight matters would have been much worse for them.

A letter was read from the County Surveyor stating that after inspection of the site for the proposed memorial at Balnamore he recommended the County Council to offer no objection providing a satisfactory light was maintained, and that the width of the three roads should not be reduced by any erection that might be contemplated; that in each case a clear carriage way of at least 18 feet, not including footpath, should be left. He believed there would not be any difficulty in meeting these requirements.

Eventually Mr McFall decided to include in his motion that the necessary powers be granted in connection with the custody and maintenance of Balnamore memorial, and this was unanimously agreed to.