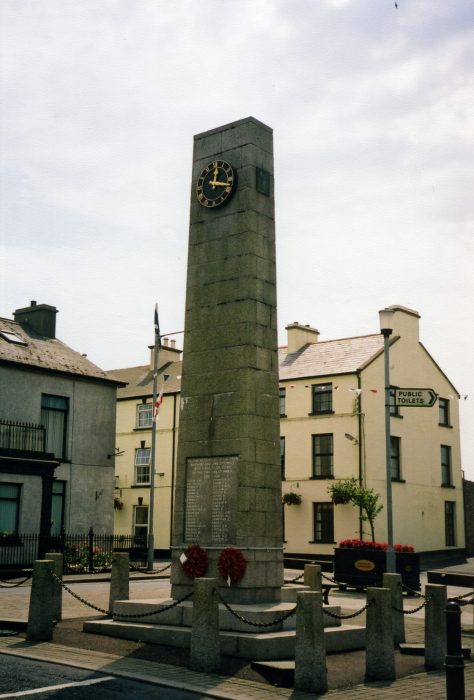 The names of the Fallen are inscribed on two tablets, one on each side of the Memorial. The inscription reads:

Although our nation has been at peace for over eleven years-albeit an uneasy peace-Rathfriland has not forgotten the 80 men from the town and district who laid down their lives for the cause of freedom in the two World Wars, and on Sunday last a 20ft. high granite War Memorial was unveiled in the town’s spacious Square.

The Memorial which is in obelisk form and will be floodlit at night, has a double-sided clock, the gift of Miss Jane Woods, of Drumlough, Rathfriland, who performed the unveiling. More than 3000 people from over a wide area attended the ceremony, which was blessed with glorious weather.

There was an impressive parade, under command of Lt. W. Turkington, 5th Battalion R.Ir. F. (T.A.), Newry, whose company provided a guard of honour and buglers. In charge of the various organisations where: –

Major General G. L. Gartlan C.B.E., D.S.O., M.C., D.L., J.P., president of the Local Branch of the British Legion presided. He returned thanks to Major Meade for the site for the Memorial, Major N.F. Gordon (Annalong) for designing and carrying out the work; Major N.E. Mitchell, County Planning Officer; Mr. A. Cust, of the E.B.N.I., and Mr. Caldwell of Messrs. Caldwell for their assistance in the intricate questions which arose over the floodlighting; the Newry Company of the Royal Irish Fusiliers for mounting the guard of honour; the various parties of the British Legion, B Specials, youth organisations “and all those who have come to do honour to our dead.”

“There are people,” continued the Chairman, “who maintain that a memorial should take the form of something practical, such as homes for ex-Servicemen, wards and beds in hospitals.

I personally don’t agree. I cannot help thinking that a War Memorial should take the form of something that appeals to our spirit, not merely something that is material.

Throughout history it had always been customary to erect memorials to commemorate some great dead or in memory of men and women who by their efforts had done well by their country.”

Very often-and much too often in the last half century-men had to lead great navies and armies in battle. The men whose names were inscribed on the Memorial there were not the leaders of great navies, or armies. They were ordinary men, like themselves, whose only wish was to lead the lives of their parents before them, whether on the farm, in business, or in industry. But when the Call, came without heraldry or trumpeting and without fuss, they answered it, and they paid for their valour by death.

“Surely it is up to us,” he said, “to honour these men by putting up something to remind us of what took place in those years. I know there is nothing required to remind the relatives of the men who have fallen of their loss; their names are forever inscribed in their hearts. I hope that to the younger generation, and to the generations that come after them, this Memorial will be an inspiration, and if ever the occasion again arises they will always come forth and as gladly do their duty as these men did.”

Miss Woods then unveiled the Memorial, the guard of honour presented arm. Buglers W. McCall and J. Preece sounded the “Last Post” and after the two-minutes’ silence “Reveille.” The British Legion oration, “They shall grow not old,” was recited by Mr. Haydn Warman, the ex-Servicemen responding, “We will remember them.”

Captain (Rev.) David Lewis (1st West Yorkshire, Regiment, Ballykinlar), dedicated the Memorial to the glory of God and in proud memory of those who gave their lives in the cause of freedom, after which Rathfriland Silver Band led in the singing of the hymn, “O God our help in ages past.”

The second wreath was laid by Mrs. Speedy, J.P., and bore the inscription: “In proud and loving memory of those who made the Supreme Sacrifice in both World Wars. From Rathfriland Women’s Branch of the British Legion.”

“In grateful remembrance of all Scouts who made the Supreme Sacrifice” (laid by A.S.M., Jack McCracken).

“In proud remembrance,” from the Girl Guides (Miss Judith Dougan).

“In loving memory of Sergeant John Burgoyne. Lest we forget.” (William Wright).

“In fond remembrance of our dear brother, Pte. S.A. Foster, South African Scottish Regiment, killed in action 10th July, 1916. At the going down of the sun, and in the morning we will remember them.” (Mr.C. Steele).

“Haire-In loving remembrance from his father, mother, and brothers.- David and Jane.” (Robert and Miss Haire)

A memorable event was brought to a close with the band playing the National Anthem.

The platform party and members of the organisations on parade were entertained to tea in the Market House. Captain McSpadden proposed a vote of thanks to the ladies who provided the tea, and also took the opportunity to thank all those who had given financial assistance towards the erection of the War Memorial (making special mention of Miss Woods), and also those who had helped in the planning.