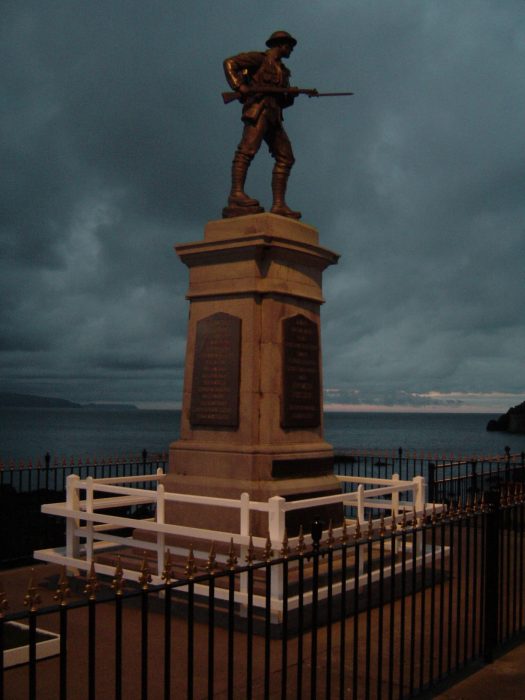 The Names of the FALLEN

An impressive ceremony was witnessed by a large assemblage of people at Portstewart [on Tuesday 11th November, 1924], when Lady Craig, wife of the Northern Premier, unveiled a handsome memorial, erected by public subscription, in remembrance of thirty men from the town who fell in the great war.

Designed by Mr Rosalyn, RA, of London, the memorial, which cost almost £800, occupies a commanding position on the promenade, which runs along the town’s principal thoroughfare, next the sea front. It consists of a life-size figure in bronze of a soldier in full war kit “on guard,” standing on an artistic limestone pedestal and platform of three steps, the whole being eighteen feet high. There are four polished granite panels on the pedestal, the front one of which bears an appropriate inscription, while on the others the names of the fallen are inscribed.

Beautiful weather favoured the ceremony, and the huge assemblage included many people from neighbouring towns.

A choir, under the leadership of Mr H. A. G. Black, with Mrs Henderson at the organ, led the praise, and in front of the platform there were drawn up the Portstewart “B” Special Constabulary, the ex-Service men of Portstewart and Portrush and the Portstewart Girl Guides.

Relatives of the fallen men were accommodated with seats next to the platform.

The proceedings opened with the hymn “God of our fathers.”

Lady Craig, on rising to unveil the memorial, said their hearts went out in sympathy to the relatives of those gallant men whose names were inscribed on that memorial. They all knew the sorrow that was ever present with them, but they also knew the pride that they all must have that their loved ones responded so nobly to the call of King and country. The memorial was a tribute of love and respect by their fellow townsmen.

Lady Craig then unveiled the memorial, which was inscribed

“To the glory of God, and in grateful remembrance of the men of Portstewart who gave their lives in the great war, 1914-1918. ‘Their name liveth for evermore.’”.

The memorial was then dedicated by the Dean of Derry, after which “The Last Post” was sounded by Bugler Platt, Coleraine.

Following the hymn “For all the saints” the chairman handed the care of the memorial over to the custody of the Urban Council.

On the motion of Mr. A. G. Crawford, J.P., seconded by Mr H. O’H. O’Neill, J.P., Co. C., a vote of thanks was passed to Lady Craig, who, in reply, said she considered it was a great privilege and honour to have been allowed to have her name associated in any small way with that memorial to their local heroes, a memorial which would stand for all time as a reminder to future generations of the splendid example which their young men showed and of the splendid spirit of the Empire, which, she hoped, would never die.

“See to it,” concluded Lady Craig, “that their sacrifices are not made in vain, that the traditions and ideals for which they fought will be for ever upheld, and that the children are taught to honour this, so that when their time comes to carry on, and we are no longer here, they will maintain that same spirit which has added such glorious lustre to our Empire.”

The proceedings concluded with the National Anthem.

Subsequently many beautiful wreaths were laid at the base of the memorial. Besides those from relatives of the fallen men, there were tributes from Lady Craig, Sir Malcolm M. Macnaughten, M.P., for the constituency; Mr S. R. Henry (chairman) and members of the Urban Council, the “B” Specials, ex-Service men, Girl Guides and other organisations. A wreath from Lighthouse L.O.L., No. 579 was deposited by Mr James Spence, who has been a member of that lodge for sixty years.

Portstewart War Memorial, which has been erected by public sub­scription, in honour of thirty men of the town who lost their lives in the Great War, was unveiled by Lady Craig, wife of the Northern Premier, before a large assemblage on Armistice Day, 1924.  Designed by Mr. Roslyn, R.A., of London, the memorial, which cost almost £800, occu­pies a commanding position on the promenade, which runs along the town’s principal thoroughfare next the sea front. A splendid memorial in every respect and one that worthily perpetuates the gallantry of the men to whose memory it has been erected, it consists of a life-sized figure in bronze of a soldier in full war kit “on guard,” standing on an artistic limestone pedestal and platform of three steps, the whole being eighteen feet high. There are four polished granite panels on the pedestal, the front one of which bears an appropriate inscription, while on the others the names of the fallen are inscribed.

If you can supply additional information, photographs of War Memorials in the nine counties of Ulster, or wish to report errors, broken links, make comments, suggestions, requests, etc. please email
uwms@outlook.com
All contributions will be acknowledged.