This page contains three images, names of the fallen and a report on the unveiling and dedication ceremony. 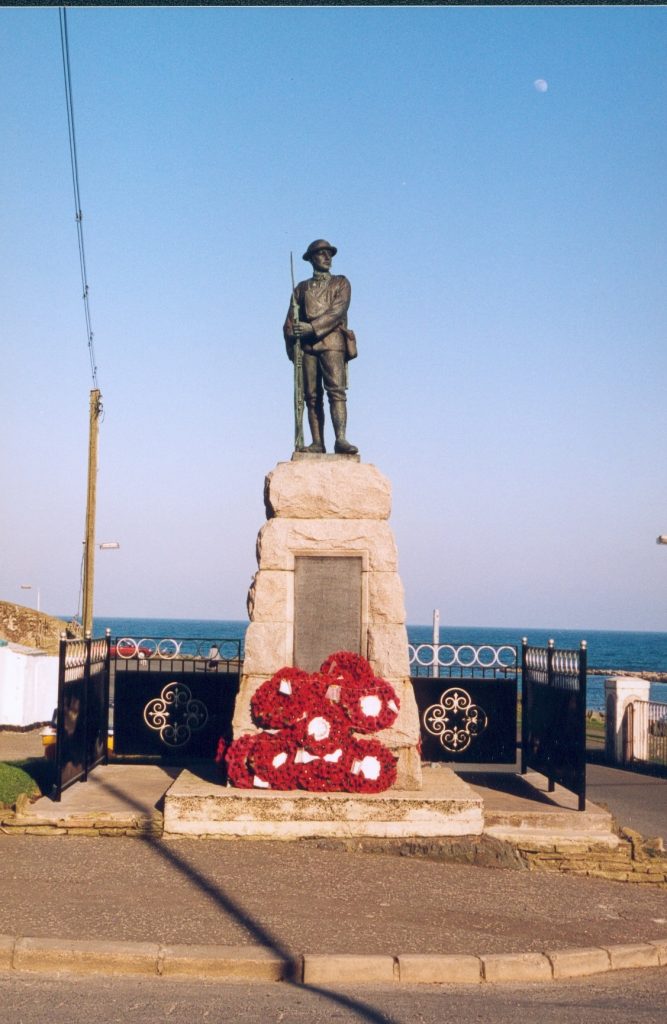 Names of the Fallen

In fitting surroundings and with appropriate ceremonial there was unveiled on Wednesday 25th October 1922 in Ballywalter a Memorial which will forever keep in recollection of the worthy folks of the village the great and glorious services rendered by its sons in the Great War.  The place selected for the memorial is known locally as the Rock, at the head of the town, leading to the harbour, and its situated is an ideal one situated as it is amid rugged scenery land and sea combining to make a picture which cannot be easily be erased. Ballywalter should be proud of itself, and the good folks there have set an example which might with good effect be followed by others with more populous communities. In the organisation of erection of the Memorial the Rev. George Heron was appointed to do the secretarial duties, and they were discharged with credit-the burden of responsibility practically resting on his shoulders. The cost of the Memorial was subscribed locally a testament from the people of their gratitude to those who freely gave their lives in the cause of Freedom and Right, and those who were fortunately, spared to return to their homes.

The Monument represents a Rifleman standing to arms, and is of cast bronze, and was executed by Mr. P. C. Bantham, R.B.A., London, the casting being carried out by the Morrison Art Foundry, London. The figure is erected upon granite from Newcastle, and the foundation and it make an admirable combination. The architects, Messrs. Munce and Kennedy, gave their services free- a consideration which is much appreciated.

There was a very large attendance at the ceremony, which included the school children, who, very acceptably, under the conductorship of Mr. R. T. Evans, the efficient principal of Ballywalter N.S., led the praise service, which commenced with the singing of the Doxology. The Rev. George Heron read the lesson, and the Rev. W. Kelly, vicar, offered up prayer.

The Honourable Harry Mulholland then announced the following names as set out on the plinth, who had sacrificed their lived for King and Country: –

Drummers Jones and Stringall, of the first Queen’s Royals, sounded the “Last Post,” the audience standing with heads bowed.

Major-General Cameron, C.B., D.S.O., said he had been requested, as commander of the British troops in Ulster, to say a few words before asking Lady Dunleath to unveil the Memorial. He wished that a General Officer, who was an Ulsterman by birth, had been available to perform the duty.  He had however the advantage of having had considerable official connection with the Ulster Division in 1916, including its glorious effort on July 1st, and the names on the Memorial represented mainly men who were in that Division, or were in units drawn from that Province. One felt directly one met the Ulster Division that they had amongst them men who were not only admirable fighters but excellent citizens, well conducted and well disciplined, because they were drawn together from a sense of duty, and their hearts were in the great cause. He felt that the Division pre-eminently represented the New Army, which brought together citizens of all classes, professions and trades, who instinctively recognised that it was their duty to sacrifice all and take up arms for Righteousness.  The end of the Great War had not brought that world peace which so many foretold, but he was quite prepared to believe that even in those countries where the greatest disorder reigns the bulk of the population are longing for peace.  If a country wished to preserve its safety the citizen must recognize that the professional soldier, and the professional policeman, can only deal with situation up to a point, and beyond that the citizen must be prepared to take up arms himself. The number of men who realised that fact in this small, beautiful, and ordered district, and who volunteered for service, represented a remarkably high proportion of the population, and the proportion of losses was very high. Concluding, the General said- We revere those names that are on this Monument, both as gallant soldiers who formed part of that great army which saved the Empire, and enhanced its prestige and reputation, and as model citizens who placed the good of the community before the individual. So long as the country produced citizens who displayed such a fine standard of public duty, so long will the county preserve its existence and play a worthy part in the family of Nations.

Mr. Wm. Warnock, J.P., handed over to Lady Dunleath a case containing silver scissors, which were inscribed: “Presented to Lady Dunleath, on the occasion of the unveiling of Ballywalter War Memorial. 25th October 1922.

Lady Dunleath unveiled the memorial, which had been covered with a Union Jack. She said she did so to the memory of the gallant lads from Ballywalter who gave their lives, and those who were fortunate to come back, for King and Country.

Very Rev. Dr. Simms, (Major-General) in his dedicatory prayer said: – “Oh God, we remember before Thee this day all those of this place who counted not their own lives dear unto themselves, but who went forth with faith and courage and endured unto the end in our holy cause, and by their deaths helped to gain for us the victory. May our love for them ever remain unchanged till that great day of Thine, when we shall again meet them: and may we who are still left be drawn more closely one to another by the lesson of their great sacrifice, in all helpful sympathy and service, so that, being the inheritors of their spirit, we also may be counted worthy to reap and garner where they have sown, through Jesus Christ our Lord and Master.

“Oh God, Thou hast committed to us a precious heritage in Ulster, and we pray. Thee keep us faithful to our trust bought by the blood and constancy of our fellow countrymen. May we ever strive, like them to maintain the right in our day and generation, and also in our different stations live faithfully and humbly in Thy favour and service, through Jesus Christ our Lord, who taught us to pray, Our father, which art in Heaven.”

In his subsequent address, Dr. Simms said: – Though I have been speaking to you mainly of those who died for us, I would ask you to remember that they were in no way different from those who have returned to you, who are sitting by your side, who are listening to me now, as I try to give expression to the thoughts which are locked p in our heart, too sacred for common display. It is only by the immutable mercy of God that some of our names are not amongst these which are counted worthy to be held in everlasting honour. Wee, too, have heard the beating of the wings of the Angle of Death who swept them from our side and we have come here today –the living- to pay our tribute of gratitude and affection to our comrades who have fallen, because we understand the meaning and greatness of their sacrifice. We knew exactly the spirit in which they went into action, for we shared in it, and we know it was because they were content to die that we were able to go on until we reached our objective. If we have brought you back victory, if justice has been vindicated and freedom saved, if our shores are still inviolate, and our homes intact, we owe it all to those who purchased these blessings for us by laying down their lives, and they have not died in vain if those who remain remember this unforgettable debt.

No tongue can exaggerate the heroism of our Ulster sons and brothers, and I charge you to be worthy of them. There are those present this day whose hearts are hungry for the lads they will never see on this side of the River. Let your sorrowful remembrance be seasoned with a proud thanksgiving. We shall all follow them soon, and we shall find them great of soul and cleansed in the fires of sacrifice which is sealed with the mark of Calvary.

For you, I bid you this day remember and work for those who gave up, or were prepared to give their all for you: you can never repay or do too much for our heroes. They are worthy of all honour and loving service. They fought on till they brought you back victory. Try to be worthy to accommodate

Then on the high levels of magnanimity and chivalry and sacrificial endurance to which they were habituated in the day of Armageddon, and hand in hand, let us go forward with them to the new era and the fairer world which our God will give to heroes as a recompense.

The “Reveille” was sounded by the buglers, and then there was sung the appropriate hymn- “How great those glorious spirits shine.” The Rev. Canon W. S. Ker, Seapatrick, Banbridge, pronounced the Benediction, and the proceedings concluded with the singing of “God Save the King”. 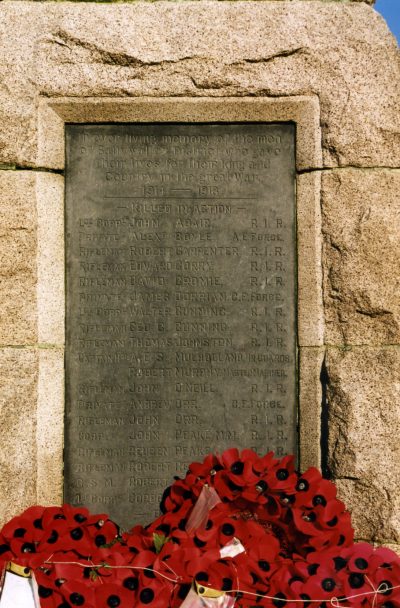 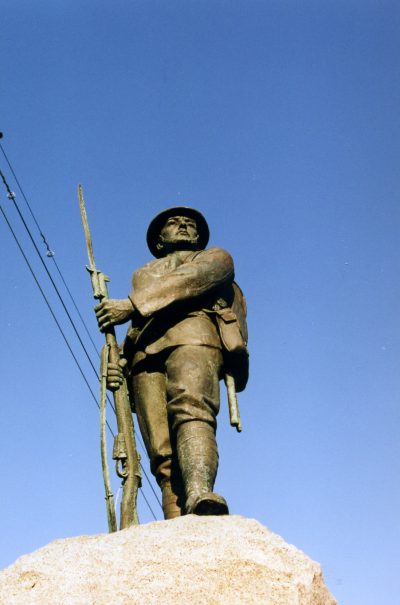