This page contains four images, the names of 124 of the Fallen 1914-1918, and a report on the unveiling and dedication of the Memorial. 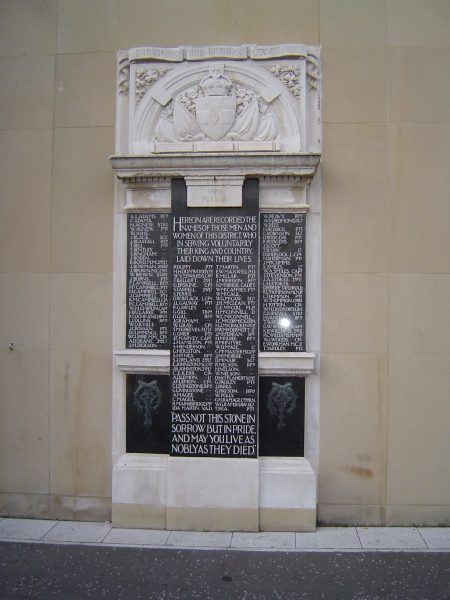 This is a memorial to the residents of the district who fell in the great war. It was erected by members of the Strandtown and District Unionist Club and was unveiled at the same time as a new Unionist Hall was officially opened.

The tablet, which has been erected outside the hall, is 10ft. 6in. high and 4ft, 6in. wide. The title of the organisation, “Strandtown and District Unionist Club,” is carved in Portland stone in the form of a ribbon at the top, and surmounts a trophy of the flags of the Allies, with the hand of Ulster in the centre, and the words, “Truth, Freedom, Liberty.” In the central portion of the tablet are arranged the names of the fallen in four columns of incised and gilt   letters on black polished granite, and underneath is inscribed:

“Pass not this stone in sorrow, but in pride.

And may you live as nobly as they died.”

Two bronze wreaths are affixed to the plinth.

At the Strandtown and District Unionist Club on Saturday afternoon Mrs. Frank Workman opened a new hall and unveiled a mural tablet as a memorial to the residents of the district who fell in the great war. The tablet, which has been erected outside the hall, is 10ft. 6in. high and 4ft, 6in. wide. The title of the organisation, “Strandtown and District Unionist Club,” is carved in Portland stone in the form of a ribbon at the top, and surmounts a trophy of the flags of the Allies, with the hand of Ulster in the centre, and the words, “Truth, Freedom, Liberty.” In the central portion of the tablet are arranged the names of the fallen in four columns of incised and gilt   letters on black polished granite, and underneath is inscribed:

“Pass not this stone in sorrow, but in pride.”

And may you live as nobly as they died.”

Two bronze wreaths are affixed to the plinth. The tablet, which was designed by Mr. Francis G. Ward, and executed by Messrs. Ward and Partners, forms a refined and imposing memorial, and all concerned are to he complimented upon the successful outcome of their efforts. In connection with the memorial hall Mr. R. .S. Hill was the architect, and Mr. W. Miskimmin the builder.

Mr. Lowry said that they had come together to open their new hall unveil the tablet raised to the memory of their dead—some of them relatives, many of them comrades, and all of them neighbours-who so selfishly gave their lives for their country and for us.  They were not conscripted soldiers, they all freely offered themselves to preserve for our heritage in the British Empire. They lay buried in France, Flanders, Palestine, Russia, Egypt, and the Dardanelles.  The seas rolled over them, north, south, east and   west. They had fought their fight, and it was for us to ensure the heritage they   preserved.  The danger they endured and the pains they suffered we must never forget, and in the dangers we have now to face we should always remember their comradeship and brotherhood in arms. Might that comradeship that won through with them he ours today, and in that hall might we always have a rallying place for Unionism, education, and social intercourse. Might that memorial always remind us that those who are gone would expect that we hold together and carry on in the war against Sinn Fein and Bolshevism hand in hand that still threatened the Empire. (Applause.)

The hymn, “Our God, our help in ages past,” was then sung, Mr, B. H.  Horrobin playing the accompaniments, after which Rev. A.W. Barton, B.D., offered prayer.

Mr. W. H. Scott made a statement regarding the activities of the Club since decided to erect a lasting memorial not only to their own immediate members, but to all those who in any way were identified with families in the district, irrespective of their religion or politics, who laid down their lives for King and country.  In April, 1919, the heavy casualties amongst the fighting forces raised from that district be­came so important that the members of that Club decided that something should be done to keep their name before the people of the district. Various forms suggested themselves, but an opportunity having presented itself of acquiring on lease the whole of that building, it was determined to avail of it, thus provide a memorial of a practical character, and at the same time to mark the exterior with an ornamental record of those heroes in whose memory the work was undertaken. It would be apparent to each one present that a suitable structure for public gatherings; for social, educative, or political, meetings was a necessity.   The district was a growing one, and the time for going into other areas for platform accommodation was long past. The capital cost of the building operations was £1,860, tablet  £300, and equipment £340, making a total of £2,500. By the efforts of the Club members and the Women’s Association about £2,000 had been raised, so that a sum of about £500 was required, over and above outstanding subscriptions, to clear the hall of debt. The provision, of that accommodation had long been a scheme in the minds of friends of the district, and they as a Club were proud of being favoured with the opportunity of showing in a public manner that they were not forgetful of the sacrifice made by others.

Mrs. Frank Workman in declaring the hall opened, said that she felt it a great honour to have been asked to perform that all remember that ceremony. They would all remember that momentis year 1914- it would stand out in their memories as long as they lived- when Ulster called on her sons to fight for her, and a few and a few months later, when the British Empire stood in danger, it would long be remembered how the Ulstermen laid aside home troubles and willingly responded to the call to fight for King and country. (Applause.) She thought the Committee, knowing in 1914 how great the need of a meeting place was were to be congratulated in going forward and building that hall as a standing memorial to the men and women of the district who answered, so gallantly to the call of duty, and who had laid down their lives, as well as to the men who so victoriously fought and who have been spared to return. It gave her great pleasure to declare the hall open to all loyal men and women of the Strandtown district. (Applause.)

The members of the Club and the visitors then proceeded outside to the mural tablet which was covered by a large Union Jack.

Mr. A. J. Campbell, chairman of the Club who presided at the unveiling ceremony, said that there must have been over 1,000 recruits from Strandtown, Knock, Ballyhackamore and the surrounding district. Of these there had been sent to the Committee the names of 128 of those whom they now held in memory.  As they heard the names read out they would realise how great and widespread was the part played in the fight by that dis­trict.  Some of those who bad fallen were buried in far Arabia, others lay in the depths of the sea, others came home broken in health and were now interred in the churchyards of the district. But the great majority of them slept in France, which had become sacred and hallowed soil to those that were left, and which would form a link between the nations that they believed would never be broken. They were proud of the example which those men had set, and of the spirit which they had shown.   (Applause.)

The Roll of Honour

Mrs. Workman, in performing the unveiling ceremony, said that she felt it an honour to have been asked to unveil that memorial tablet, which was dedicated to the men and women of Strandtown district who, in response to the call of King and country, left all that was dear to them, went forth to the great war, and nobly died. It was to those who had fought with them and lived beside them to see that their names were not forgotten, and that the deeds of valour, the hardness endured, and the victories won should be told and retold by father to son and to son’s son. To those who had lost dear ones they tendered their most loving; sympathy. In their sorrow might their hearts be full of love, and pride in the sons who fought and bled and bravely died for the sake of others. To their glorious memory she unveiled that tablet.(Applause.)

Prayer was offered by Rev. Dr. MacDermott, and buglers of the 8th Battalion Royal

The interesting proceedings concluded with the singing of the National Anthem. 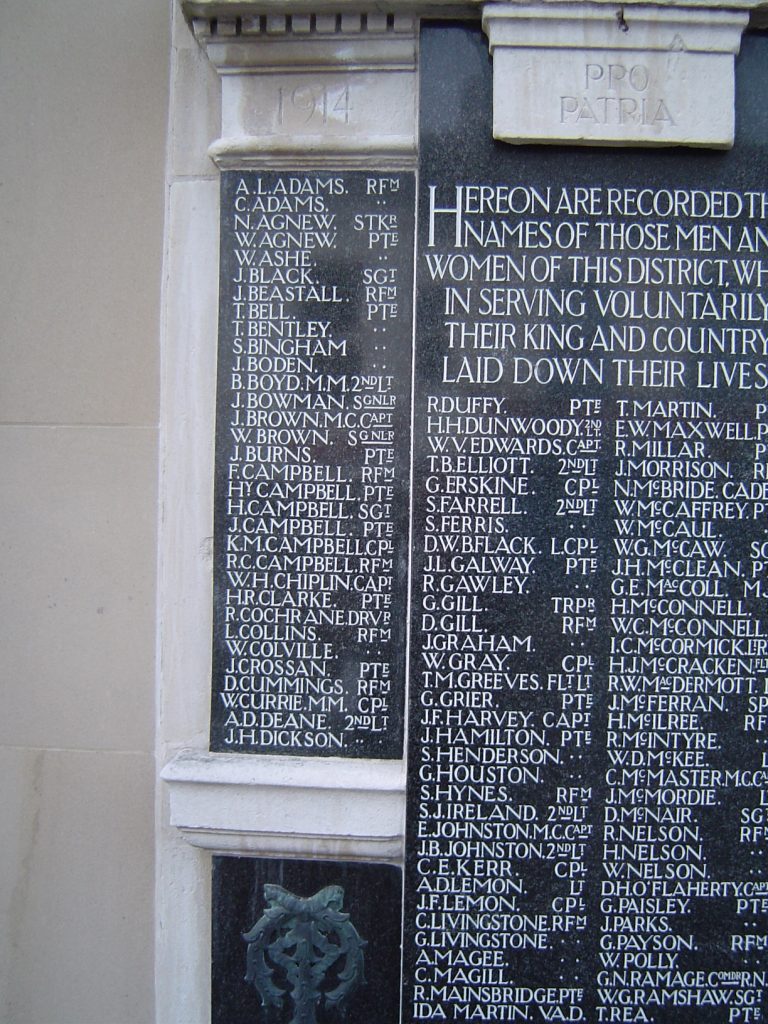 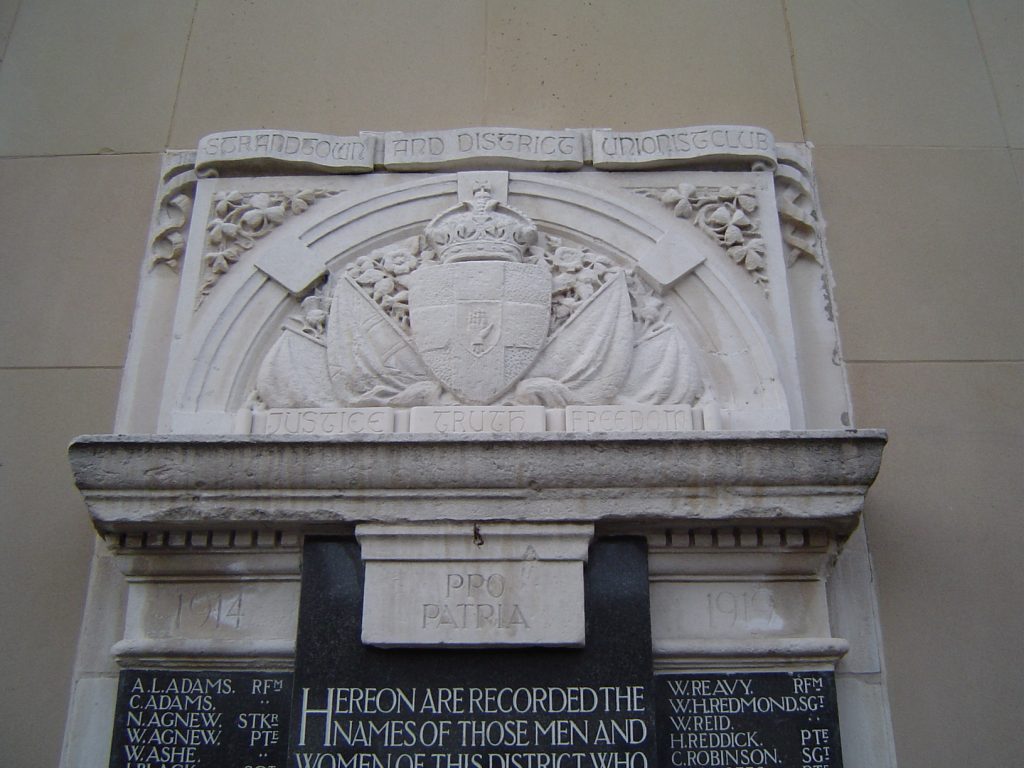 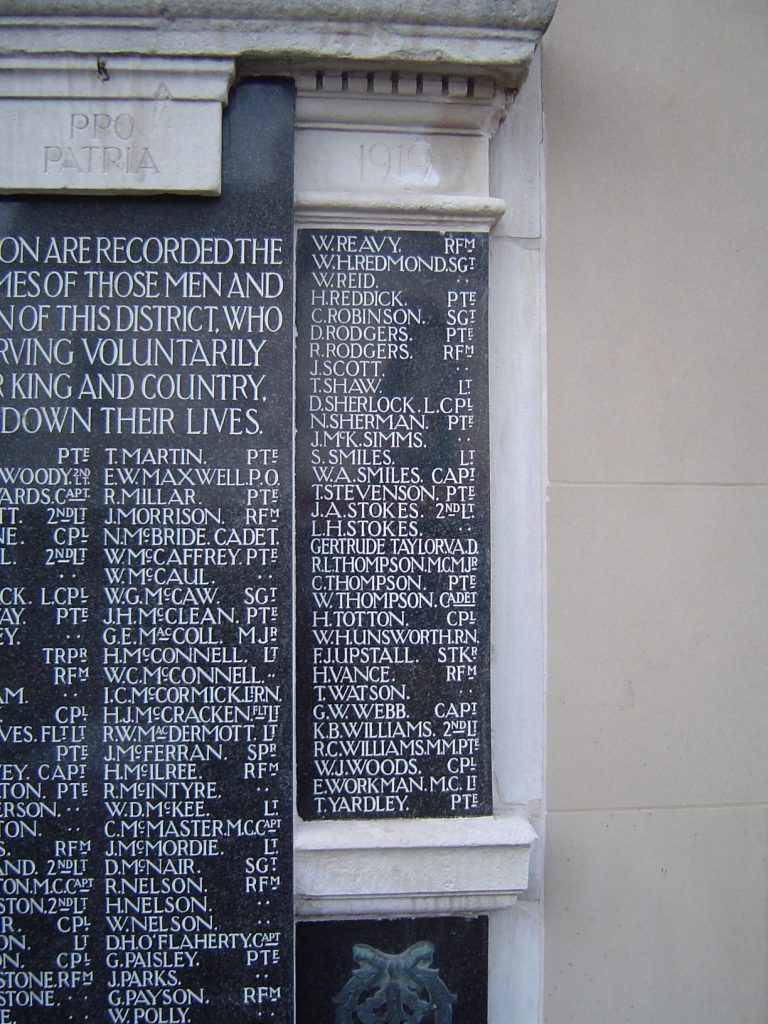