This page contains one image, the names of THE FALLEN and a report on the unveiling and dedication of the memorial. 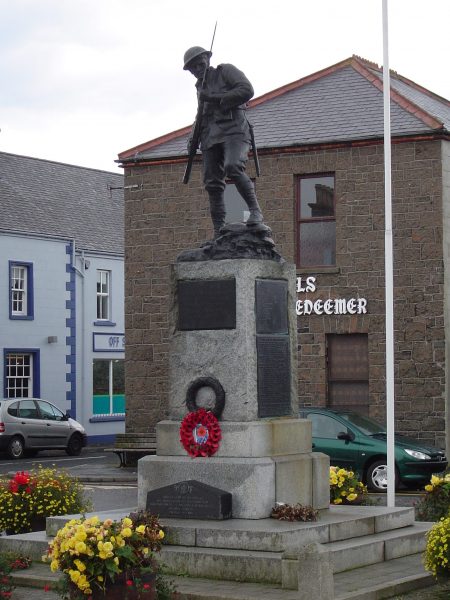 Bushmills was the scene of an impressive, patriotic demonstration on Saturday on the occasion of the unveiling of the local war memorial. The monument, which occupies a central position in the spacious square, is a life-sized bronze figure of a khaki-clad, steel-helmeted rifleman, with fixed bayonet, at the charge. There is an expression of grim Ulster determination on the features and in the tenacity of the muscles braced for re­sistance to the enemy. The monument stands on a high pedestal of granite, and on the front is a brass tablet inscribed, “To the men of the town and district who gave their lives for their country in the Great War, 1914-1918.”

The monument is the work of Mr. Charles L. Hartwell, A.R.A., and has been exhibited in the Royal Academy, Loudon.

Large crowds came into Bushmills from all the surrounding districts, and in their number were not a few of the widows, mothers, and other relatives of the gallant  County Antrim who surrendered their lives for their country and King.

The chair was taken by the Hon. Sir M. M. Macnaghten, K.C.

BEFORE THE CALL AND AFTER.

The Dean (who was field chaplain to 109th Brigade) said they were gathered that day with feelings both of pride and of sorrow. They, were proud that at the call of duty their country, and especially that district, responded so nobly; and at the same time their hearts were filled with sorrow when they remembered, with love and esteem, those gallant ones, whose names were inscribed on that memorial stone. They all knew that war was a thing that was hateful to God and hateful to every right-minded man. At the same time they could not help remembering that, in those days of agony and of such con­flict as the world had never seen before, the manhood and the womanhood of their nation rose to its very highest. In the days before ‘the call’ there were men walking about the streets of Bushmills and of every other town and hamlet in the country who had in themselves the capacity for such heroism as in the world had never been excelled; but the circumstances of our ordinary life were not such as to give opportunity for display of the very highest qualities of which man is capable. In the crucial heat of the fur­nace of the war, however, they saw these men rising to the highest test of courage and endurance that had ever been known in the history of the world. (Hear, hear.) They saw them display not only great bravery, but tenderness, self-sacrifice, and a sympathy with others which in themselves were truly divine, and must for ever exalt the ideals of manhood. (Applause.) He (the Dean) thought they were somewhat prone to forget the greatness of all that our heroic soldiers had won for us, and for which they fought and fell. If they had failed we would have been at the mercy of an implacable enemy which would never have hesitated to inflict any cruelty it could upon the people whom they hated. We would have been groaning to-day under the loss of our liberty and unexampled exactions, and the foe would have been spreading disaffection throughout our great Empire, which, we believed, was the hands of God, directed to righteousness.

The Dean proceeded to speak of the work that had been done by the British Dominions and the Allies in the erection of kindred memorials to the heroic dead, and said that that was an exhibition of the fact that they were united in one common aim and purpose, that they were joined in one common triumph, and shared one common sorrow. In sympathy, love, and gratitude they had erected that memorial to their gallant dead. It would be to coming generations a constant reminder of what, the gallant and brave had dared and done for their country, Nations and causes were only safe when men were wiling to lay down their lives for them. (Hear, hear.) He felt it his duty to pay that tribute to the exceptional response made from that town and district to the call. The great record of losses sustained, as shown in the roll of honour, showed that their soldiers were to be found where the battle was thickest, and that it times of danger and difficulty they were not afraid to face the worst. Just as the previous achievements of our people had played their part in forging, fashioning, and forming our character so those splendid and heroic deeds which were being commemorated that day would play their part in encouraging generations to come to high endeavour.

“In God’s sheltering goodness we leave them,” concluded the Dean; “ever in affection shall we hold them in all honour.”

THE  FIRES  OF  HEROISM.

Rev. Captain A. Gibson, M.C., said that for the men who went out and stood the shock of battle in the field they were hard days, but he thought they were greater days than any that had succeeded them. The day that Britain entered the war, knowing a little of the path of suffering she would be compelled to tread, was the day that she reached her highest level as a nation. That sudden test demonstrated that the fires of heroism could be rekindled, and that the capacity for endurance had not vanished with the years. They were not so vain as to say that as a nation they won the war; but he thought they might say that had it not been for Great Britain the world’s freedom could not have been saved by any other efforts of mankind. They were met that day to remember those who assisted to give them that victory.  The heroic dead were ever in the pride and affection of their hearts, wherever their bodies rested-whether in graves that were marked and might be visited, or whether they were of that great company represented by the Unknown Warrior who sleeps in Westminster Abbey-they were ever remembered with the brave of all the world. The blow that was aimed at us was sheathed in their hearts; and because they died we live. The symbol for their sacrifice mutely beckoned to us to share their immortality, for their way to service was the way of the Cross, and only that way could the world be redeemed. There were those who wanted to forget the war, such as the men who stayed at home to make wealth while others served. There was no room for that type of man, and he did not think there were many of that kind in Bushmills. They had done their share nobly in the past, and they acknowledged by that monument some part of the debt of honour they owed to those men who fought and died for them. They wanted to keep their memory green, and tell those who came after them the price that Bushmills paid for the saving of the freedom of the world.

Many of them whom he knew belonged to the ‘D’ Company of the 12th R.I.R., known as the “Old twelfth.” They were a pioneer company, but could handle a rifle as well as a shovel, and could not only make trenches but take trenches. From the great day of the Somme on through the war they, added laurels to their name and wrote the name and fame of that town in blood. Honourable is their name, and their name liveth for ever­more.

Rev. Professor Paul said he fell it a great privilege to be back in the district he knew and loved so well to join with them in their sorrowful and proud memories. He would speak with reverence, of their brave lads, those who returned and those who did not return; and he thought the dominant feeling in their hearts that day was one of great gratitude to God for the brave ones. He sent to be with them for a time. They saved us from being trampled down in the mire under the hob-nailed boots of Prussian militarism. He learned a great deal in France from other men. He learned that although human nature at its worst may be a very poor thing, at its highest it rises to the footstool of the Eternal. One felt prouder of being a man because of what those lads did. Dare anyone think that their deeds of self-sacrifice passed unnoticed, or would go unrewarded at the last great Assize? He talked to thousands of our men out there and never met one who was absolutely irreligious, or who failed in confidence to express his need of God and his yearning for God. They told him that they did not like to speak of these things at home, but the truths they learned from their father, or mother, or sisters bore blossom in the fields of France.

The large assemblage then rose, and stood with bared heads while Captain S.J. Lyle, J.P., M.C., read the names inscribed on the monument.

The Hon. Lady Macnaghten then released the Union Jack disclosing to view the handsome memorial. Her Ladyship said she was very glad to be with them that day to join in the unveiling of that memorial to those they hold go dear. She hoped they would hold it as one of their most cherished possessions, in loving memory of those whom they were all so proud to honour.

The “last Post” was sounded by Buglers Platt, and, after the hymn, “How bright these glorious spirits shine” the Rev. F. Medcalf, offered up the closing prayer. The shrill notes of the Reville were then blown on the bugles, and all present, joined in heartily singing the National Anthem,

Subsequently the ex-Service men’s guard of honour marched past the memorial, and gave the salute. Many wreaths were then deposited at the base and on the sides of the monu­ment by widows and other relatives also on behalf of various organisations. There were beautiful floral tributes from the Bushmills War Memorial Committee; Hon. Edith Lady Macnaghten and Hon. Sir M. M. Macnaghten, K.C.; “In memory of our fallen comrades- from ex-Servicemen;” 1st Bushmills Troop B.P. Boy Scouts; R.A.S.C., per Lieut.-Colonel Atkinson; “A nos morts bien aimes” from a French lady; and many private wreaths.

Mr. R. J. Gaw conducted the special choir. Sergeant-Major Thomas M’Fall and Sergeant John Dean were in charge of the guard of honour.

The names of the heroic dead inscribed on the memorial tablets are as follow:-

It is an interesting fact that during the trying period of the war a considerable sum of £3,000 was collected within the petty sessions district of Bushmills for war com­forts and kindred objects.